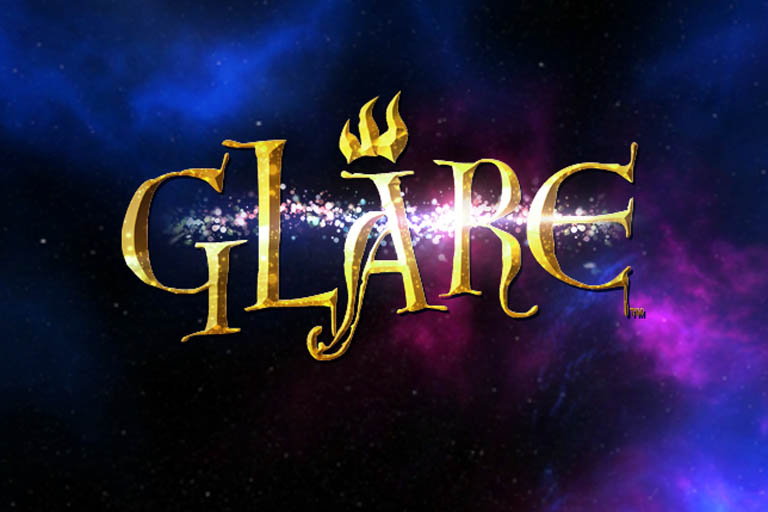 Everyone at PAX was super excited about all the big name things coming out.  I’m included in this.  I’m all a titter over The Elder Scrolls Online, Assassins Creed IV: Black Flag and any number of the titles that usually get the spotlight, but one of the games that outshined the rest for me was Glare, a side scrolling action platformer from Phobic Studios.

It’s been a couple of weeks since PAX and since then I’ve been thinking a lot about this game and how amazed I was when I sat down with creative director and co-founder of Phobic Studios Brian Powers for a demo. The result was me being blown away by the game’s beauty, innovation and creative gameplay.

Coming off of the successful co-development for mobile, DragonVale, Phobic presents Glare, in which the player takes on the role of The Shiner, a light wielding hero who must defeat the evil forces of darkness that are ravaging an entire solar system and destroying the sun.  As part of his quest, he’ll need to purify the surrounding planets with light and make his way to the planets’ cores to activate them as part of a larger machine that can save the sun. 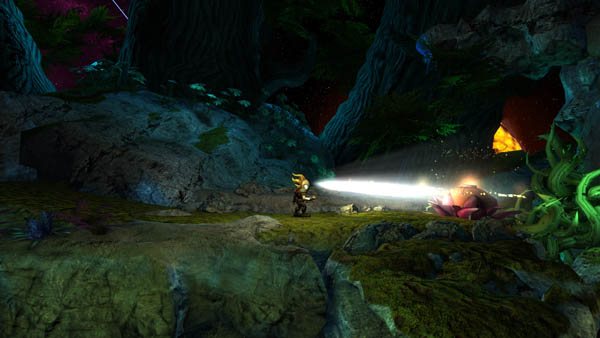 When I first sat down to watch the demo I was already falling in love with the vibrant art style, and everything I saw from then on in kept me grinning bigger and bigger.  Glare is a radial shooter in a platform setting with a relatively simple story and simple play mechanics.  Using essentially two buttons on a controller the entire time, or a mouse and keyboard the player will navigate the Shiner though a magical, lively landscape full of interactive environments, puzzle solving elements and exciting combat.

The game is brightly colored, with lush scenery, seamless, constant gameplay, and living worlds full of strange and wondrous creatures.  The interactive nature of the levels makes for exploration and satisfying discovery.  Shine a light on a withered plant for example, and it will grow to a height that will allow you to climb from it to a higher ledge.  Illuminate a strange looking spot on a wall and it can pull you toward it, acting as a sort of grappling hook should you need an extra boost.  Need to climb to the top of a deep ravine?  No problem.  There may be a gentle foliage covered giant standing around that you can ascend or even an indigenous bird that you may be able to catch a ride on.

As the player progresses through the variety of worlds from harsh deserts to snow capped mountains to green and purple rain forests, there are several helpful “shrines” where new and useful powers can be discovered and enhanced.  These will come in handy when the nasty beasts materializing from the shadows attack. 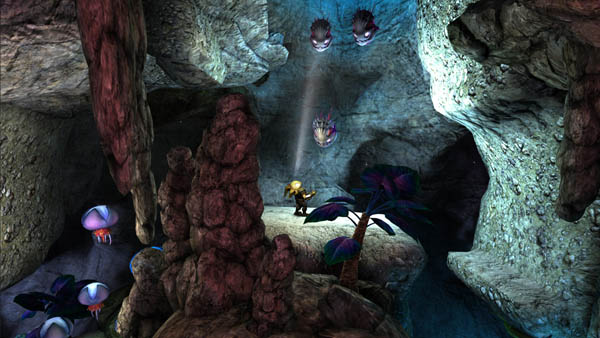 Combat is strategic and responsive as well.  The Shiner uses his light to cast a beam at the baddies, which knocks them back to make for convenient shooting, or you can even cleverly shove them into a bed of thorns or some other hazard that will take them out.  Your light will also deflect projectiles and buy you a few seconds to retreat or get your bearings as you’re assailed by the shadows.

The user interface is blissfully and intentionally non intrusive with minimal tutorial text and no HUD to take the player out of the game.  Take damage and instead of a health bar, the world will get progressively darker, Making it difficult to see.  There’s no regenerative health system, but defeating a few enemies will yield a few orbs of light that they’ve consumed, and this will be enough to get you back on your feet.

As I watched the gameplay I was absolutely hypnotized by the fluid succession of the levels and the seemingly expert manner in which the player glides through this beautiful world.  Glare is just as beautiful to watch as it is to play.  It seems challenging enough, yet not impossible and anyone playing will feel like they’re doing some pretty amazing things even if the game isn’t asking too much from them. 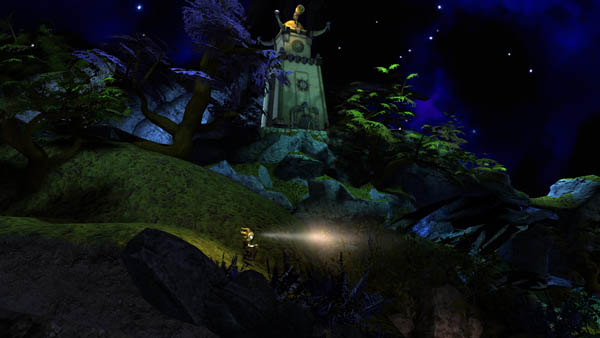 All of the great music for the game is done in house and it sets the ethereal tone for the game. It’s an additionally well crafted component of the experience and adds another layer to an already fully realized package.

I was told that it takes approximately 3 hours to play through the entire game, which is great for anyone who doesn’t have the time to sink 60 hours into an epically involved narrative.  Powers expressed his preference for games to be more like consumable media, like a movie, rather than bloated  with repetitive content.

I won’t even say that this is a game you might want to check out.  Glare is a game you should play. Period. It’ll be released in October in the Steam Humble Indie store. You can even preorder it now for the discounted price of $12.99.  The regular price when the game is released for PC, Mac and Linux will be $14.99.