There is a world, a world of unending pain, where an untold number of hostages of a sadistic serial killer remain strapped to instruments of pain and torture; motionless, they are unable to even struggle, instead using their terror-filled eyes to plead with you to save them as you stare down impotently….from a hot air balloon. I am of course speaking of the digital war crime that is “Sheep Impact” ($0.99, Android Market).

Falsely marketed as having, “a cartoonish charm and the game physics to ensure you’ll be going back to it for some time,” the game involves nothing more than the frantic tapping of your screen to keep your balloon of salvation aloft. As you pass each restrained lamb, you must carefully decrease your taps to intercept them before their device detonates. Too low, you explode in a fire-ball of doom.

If you are unable to grab them as you pass, you are forced to watch them perish at the hands of myriad devices of death. Examples include improvised explosive devices, circular saws and car batteries alligator-clipped to metal caps.

The boards are increasingly difficult, forcing you to choose who to save, and who to leave to their deaths. You are allowed somewhere between 15-25% collateral damage but I found myself replaying boards again and again, “playing” late into the night, pushed to point of insanity as I was haunted by all those I could not save. True, I could have stopped at any time, but like Dr. Sam Beckett, I could not accept all those I would never save.

Like a comic book villain, the killer tortures us with awful puns, naming boards things like “When the Sheep Hits the Fan,” “Ewe Sur-Pasture Self,” and the groan-inducing “Mint!” 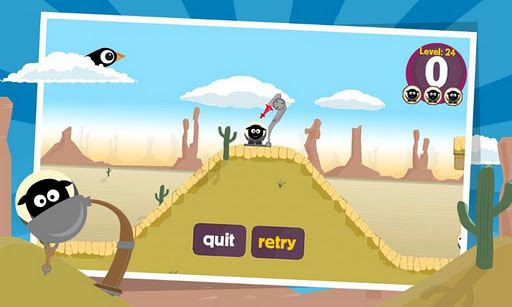 Even the rudimentary worlds that the developer draws around the doomed mutton speaks of a lack of human understanding, and perhaps a hatred of the “real” world that he inhabits. The minimal “forest” is limited to a few random trees, the “desert” offers little more than cruciform cacti that scroll endlessly past your retinas as you struggle in vain to save the wooly victims. I would say that the backgrounds should have been developed more, but then again, what is the point? You don’t spruce up a kill floor with flowers and a Garfield poster.

Note: the mountains in the first stage are oddly tapered and pointed; resembling an almost grotesque version of a woman’s breast; perhaps the frozen teat of an uncaring mother that drove this madman to mass murder? This author can only offer conjecture.

Your avatar is similarly undefined: a hot air balloon, devoid of any passenger, that vomits a continual greasy black stream of smoke (showing an additional lack of caring about our environment). This inability of the developer to include an anthropomorphic representation of the player is representative of his views on humanity: there is no one on this earth that is not either himself or a target of his never-ending rage.

Is it not enough that we ask sheep to make the ultimate sacrifice to give us our decadent standing rib-roasts, delicious gyros, and J-Crew heather green roll-neck sweaters? As Gandhi once said, while playing a primitive form of Q-Bert with hamsters and a mud-thatch pyramid, “The greatness of a nation and its moral progress can be judged by the way its <digital> animals are treated.”

I am petitioning the UN to step in and enforce economic sanctions against the developer, Bang Lethal, and provide a software patch that installs an armed 8-bit peace keeping force. Every day that we allow these atrocities to continue, we all lose a bit of our humanity.