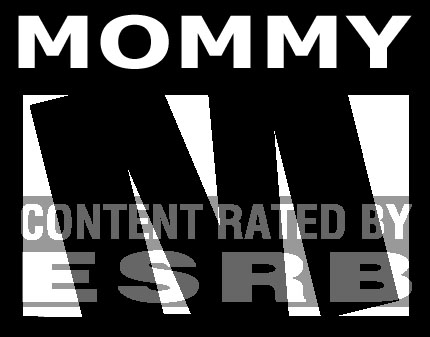 I think when many people hear the word “mom” they think of the traditional female gender stereotype role. You know the one I’m talking about: in the kitchen, changing diapers, cleaning house, etc., etc.  But people forget that moms are indeed a separate entity of their children and (perish the thought!) have interests of their own. These interests are many, for example the increasing number of women climbing the workforce ladder (but still only being paid approvimately 87% compared to their male counterparts, but that’s another rant), and yes, even video games.

We are now coming into a new generation of people: younger parents. This generation also seems to have run along side the gaming revolution. Keep in mind, perspectively from a grand scale of modern inventions, the gaming console is still relatively new. The young generation born in the 70’s and 80’s were introduced to the more popular versions of video games that were made widely accessible. I think it can be universally agreed for those who really enjoy gaming, it’s not just something you “grow out of”. Gaming is a hobby just as any other artistic or sporty activity would be. Well, what do you get when you have this generation of people who have grown up with this hobby and enjoy it? These people grow into adults, and they take their cherished activity with them. As we all know, people eventually tend to do that bothersome thing known as “reproducing.” But does this mean we throw away our hobbies? Many would say “no,” but when presented with the hobby of video games, you can expect to often hear “video games? I thought you would have grown out of that by now.”

Such an attitude doubles for women who have taken on the dynamic role of motherhood. No matter what age a woman has a child, what society expects is to have that woman make a dramatic leap in social and mental maturity. What I believe, however, is that “maturity” and “gaming” are not polar opposites, and should not be treated as such. We attach “immaturity” or a sense of youth to video games due to the excessive marketing towards younger children/adolescents as its target audience. However, some of the more popular games that have been released are rated M for mature.

The problem facing many women with children is of course, time constraints. As a mother of two daughters (one who is just turning 4 months old), I am very much limited in how much time I have to enjoy my favorite hobby. One of the main concerns I hear is “how do you have time for that?” Really, what they’re saying is “don’t you have a baby to take care of? That’s childish and irresponsible.” This is a hard conversation to have with someone, especially since most of the time, opinions in this area are already firmly made. However nobody would question a mother who is a professional actress/TV personality, athlete, or active business employee about how their time is spent. Since I am quite lucky I do not have to work (for the next few months at least), I am able to spend my whole day with my daughters. My time for game playing comes in nap times or at night when the girls are sleeping. I suppose my beef is how people attach “irresponsibilty” to a hobby merely because it is perceived to be a child’s activity. Truth be told, more than half of adults play video games, and 21% of adults play every day.  Not to mention women 18 and older make up more of the gaming audience than boys 17 and younger.  Now I’m sure the percentage of those women who are mothers goes down considerably, but it is most certainly prevalent. A person is able to enjoy gaming and be a tending and caring mother at the same time.

Not only is a “gaming mom” at times faced with criticism, but also isolation. Since the group of young mom gamers is not a substantial number (at least to my knowledge), it’s hard to find other people who are even relatable with our interests. It is even harder to find other mothers with a passion for gaming.

As video games get more and more complex, with graphics and game play that progressively rise above our expectations every year, you can expect the gaming audience to only grow substantially. I can only imagine that it will take time before the “gaming mom” subculture becomes less taboo and more, “so what?” Hopefully.