One of the coolest things about PAX is that independent developers really have a place to shine on the show floor.  Some are scattered about, but most will be found in the Indie Megabooth, which is where I spent a lot of my time.  I saw a lot of games while I was there, and all of them had something unique and interesting to offer.  Here are are just a few of those that really stood out for me, though there are plenty more on the way to be excited about. 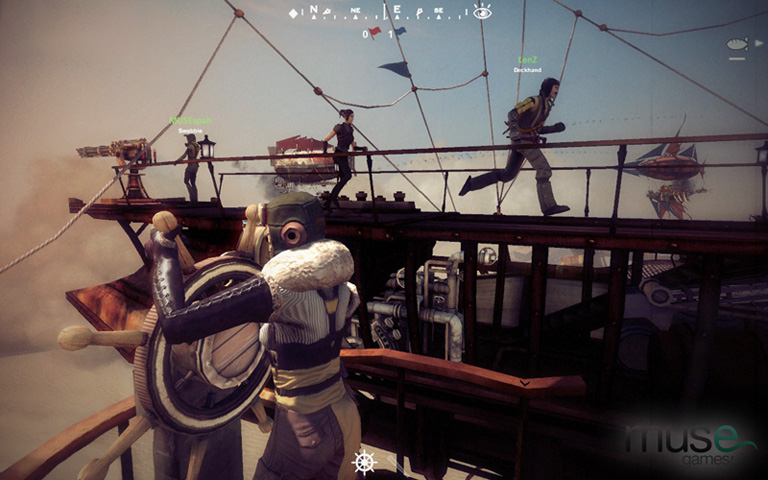 Guns of Icarus Online from Muse Games  is something I saw a couple years ago at PAX East.  It was described to me as a  co-op, multiplayer airship battle game, and I admit at first I didn’t really give it much consideration.  This year at PAX I was blown away by the newer look and feel compared to the first incarnation, and a lot of the features that are newly available.  With customizable characters, a plethora of battle ships to choose from and various classes to play, this is a game that really emphasizes teamwork and the importance of communication.  You’ll need more than one individual to man a massive airship, so there are matches for 2v2 – 4v4 which means there are 16-32 people in every match and a built in comm system so you can coordinate with your team.  If your weapon won’t quite turn enough to get the opposing ship in its sights for example, you’ll need to tell your pilot to turn whichever direction you need.  This is not a game you can silently play without rolling up your sleeves and being part of a hard working group.   When your team wins, you win and it’s a real treat to scurry around, adding buffs to your engine so it can take more damage, manning the guns at various locations on the ship and watching an airship you’ve just completely obliterated fall out of the sky to its fiery demise.  After a very successful Kickstarter campaign, they’ve also added an Adventure Mode to the game, which has a few more RPG elements to it than the simple co-op combat.  Guns of Icarus is available on Steam for $4.99 and it’ll be coming to Playstation 4 as well. 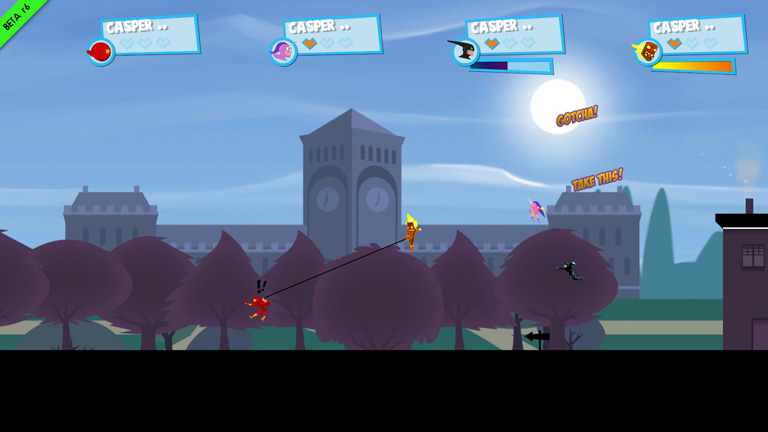 Another fun and giggle inducing title I saw was SpeedRunners, a local and online multiplayer foot racing game.  The player tries to win the race without getting bumped off of the screen either by being too slow or clumsy, or getting knocked out by a weapon of an opposing  runner.  The graphics are colorful and the game runs smoothly with responsive controls and a fun soundtrack.  It’s cartoony and fast paced and frantic and something I had a blast playing.  Swing along with grappling hooks, slide through small spaces and just generally hustle your butt through the vibrant levels avoiding traps and gathering power ups.  It truly is a game that’s main purpose is to laugh and have a great time.  The guys at PAX also get bonus points from me for being resourceful and having a mobile booth, which really just meant the console and controllers were attached to a harness on someone willing to carry it around all day.  That’s commitment.    SpeedRunners just released on Early Access Steam a few days ago for $9.99 and you can play it with an Xbox controller.   It’s excellent, and you should check it out. 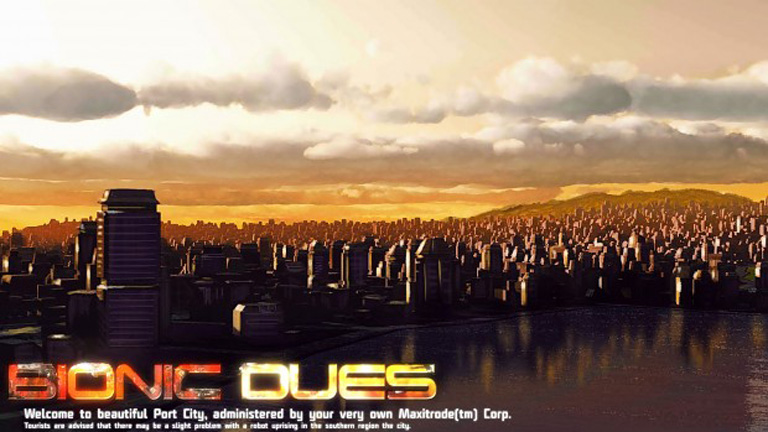 I also spent a good bit of time at the indie booth playing Bionic Dues, a tactical turn based game where you, as cybernetically upgraded citizen, man a small fleet of “Exos,” different classes or hovering robots that are being used to quell the uprising of of evil robots in a futuristic city.  I had a really great time playing this game, and it reminded me a bit of classic dungeon crawlers.  The graphics are old school, but the game isn’t about that anyway and that just adds to its charm (it’s also a pre-release build I was playing).   The story is kind of a catch-22.  You’re a human who has been badly maimed at the hands of the robots.  You could die, or the powers that be will save your life in return for your service as a robot fighting soldier.   As one of six classes of robots (Assault, Sniper, Science, Siege, Tank, and Brawler) you’ll have to make your way through various parts of an extensive city map, gathering resources, destroying enemies and counting down the days until the final invasion occurs.  There’s a lot of pressure, and you’ll have to make tough decisions.  With only one of your robots left functional, do you push through the level to reach your goal which will lower the production rate of your enemies?  Or do you retreat and keep one of your precious lives that will come in handy when the shit hits the fan at the end of the game.  Your decisions matter, as does your tactics and upgrades throughout the levels.  Bionic Dues will be released for PC and Mac in October on Steam. 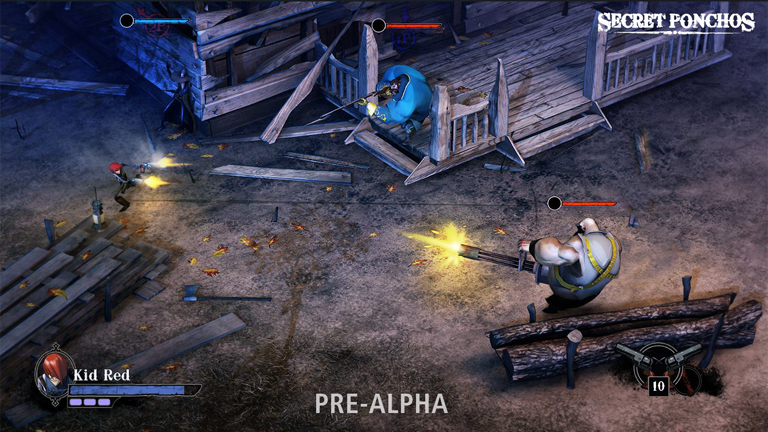 Then we have Secret Ponchos, a stylish multiplayer combat game that’s fast paced, exciting, and fun.  The game from Switchblade Monkeys was featured at E3 as one of the Indie 8 coming to Playstation 4.  It has graphic novel artwork and a wild west setting that pits the player against opponents in several different play styles like one on one duels, gang fights, or just a big free for all where anything goes. Customizable characters and upgrades that help raise your reputation feature here, and the higher your bounty, the more other players will seek to take you down.  It’s an overhead camera game with beautiful graphics and the most important thing is that it’s really, really fun to play.  It’ll be available on PS4 early in 2014 and team is also hoping to get green-lit for Steam.  Definitely check this one out. 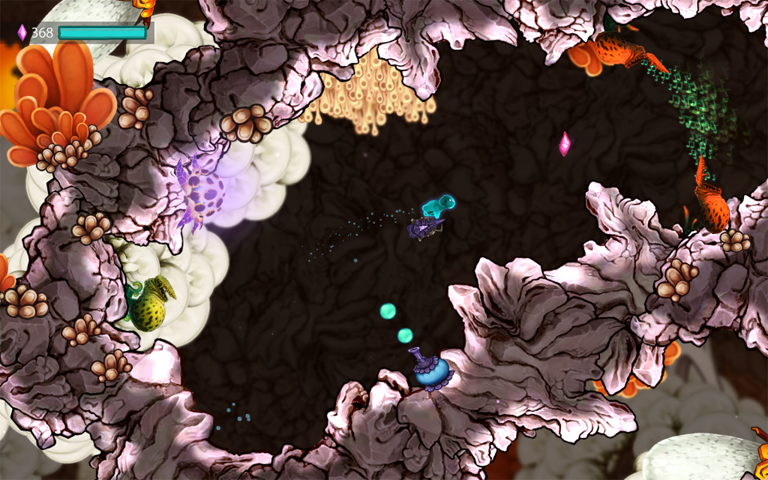 Finally is Beatbuddy and I’m already in love with this game.  From THREAKS Game Development, Beatbuddy is a unique type of game that uses music and rhythm to help propel the absolute cutest little blue blobby guy through a colorful undersea environment.  Featuring a lot of great exclusive music, including tracks from Austin Wintory (flOw, Journey), you can’t help but bop your head and foot along while navigating through the levels.  Every sound is associated with a playable game mechanic and it’s a joy to play. It’s a humorous action puzzle solver with a whimsical art style and I was lucky to stumble upon this on the show floor.  Beatbuddy is the first title from THREAKS and is already generating a lot of buzz.  It’s on Steam at the moment for PC, Mac, and Linux for $14.99, and will be available on other platforms in the future.

And there you have it, my picks for what to watch out for in the coming months.  There were a few games I didn’t quite get a chance to get to check out as closely as I would have liked, but games like Octodad and Dead State are also on my list as definite plays. Click the links for more information on those.

All in all it was an amazing PAX with some amazing games that you’ll be happy to check out.