Pocket Galaxy is an all new pick up and play ‘space adventure in your pocket’. The game itself offers a refreshing twist on the massively multiplayer online experience as it’s cross-platform technology allows players to play with their friends on iOS, Android and PC web browser. Players are able to complete missions, battle with factions and conquer territories in epic galactic style combat.

As players are able to play simultaneously across iOS, Android and PC, you’re able to play with your friends at any place and any time. Whether you have five minutes to spare or have a few hours, Pocket Galaxy lets you play the way you want, when you want. The ‘grab a ship and go’ style of combat lets you easily pick up the game and begin playing, and the real-time spaceship combat will keep you interested and coming back for more sessions. The player centric in-game economy and in-depth crafting and resource gathering system caters to even the most hard-core MMO aficionado’s.

The premise of the game is simple: two factions battle for control of the universe – the Shards and the Varians. Players are able to pick a side and then it’s up to you how you want to achieve your goals and increase your rank within the game environment. Player progression is measured via three metrics: Rank, Domination Points and Achievements. Rank reflects the player’s training level – players gain higher rank by completing missions. For every mission finished, players are awarded in-game currency and on occasion an unlock – most of the in game items require a certain rank either to be bought or produced, so the Rank system functions as a way to keep players interested and involved in the game. There are 50 unique ranks, each with five stars,  so players have a clear incentive to continue exploring and interacting with the game. Domination Points reflects the players experience and standing within the chosen faction and can be earned by killing Pirates or claiming sectors by destroying and building Outposts or support structures. Achievements are the game’s version of trophies to reward high involvement in particular tasks. 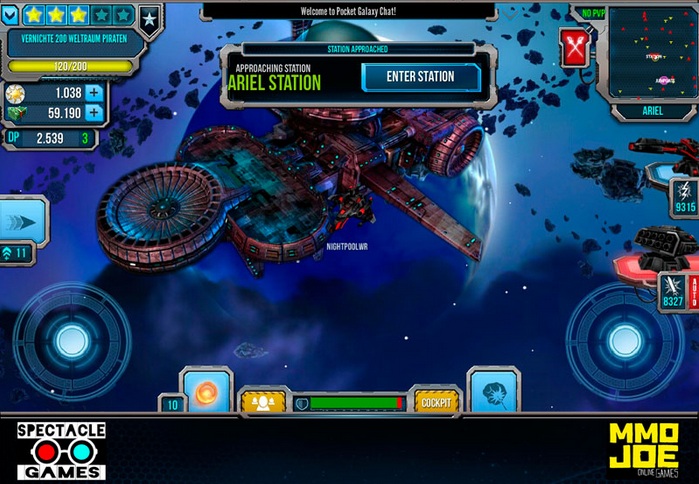 For those who enjoy PVP gameplay – Pocket Galaxy has you covered. The PVP element allows players to earn Domination Points and also includes faction upgrades as well as the chance to engage in group battles and solo play. Battlestars and towers can be used against the enemy in order to protect your own assets, with different types of towers available based on the strategy you favor.

PVP also provides the opportunity for players to try out Domination. To conquer a territory, players only need to form loose groups, however to keep hold of a territory and truly dominate it, that territory must be defended in the future. This defense requires a higher degree of responsibility and commitment on behalf of group members, as members will need to be present when territory comes under attack and will need to formulate plans on how to defend that territory. Such a high degree of commitment requires an incentive to maintain, in addition to permanent groups. For this, the game provides permanent groups called Alliances who compete weekly with one another over who dominated the most territories for the longest time. The progress of each Alliance is measured in Honor Points, and it is Honor Points which are used to calculate the weekly winners within game.

If you’re not a fan of PVP gameplay – don’t fret. Pocket Galaxy also caters to those players who prefer more solo-style game play, with the game offering over 250+ missions to complete. These missions are perfect for more casual gaming and allow players to quickly engage with the game as they begin to find their feet within the gameworld. The missions provide quick moving progression for players, a simple and intuitive unlocking mechanism, clear rewards utilising in-game currency and gives players a solid sense of advancement using easy to understand metric stars – rewarded each time a mission is finished.

Pocket Galaxy also includes additional features which will keep players who favor exploration and customization happy and engaged. Pocket Galaxy includes space stations, which can be viewed as the hub of space life. Space stations provide players with a safe place to upgrade their ships and weapons, purchase new equipment and trade with others. For the explorers amongst you, Pocket Galaxy includes Warp Gates, which provide access to additional galaxies, some of which offer unique mining nodes, missions and the stalwart of space adventures – pirates to do battle with. 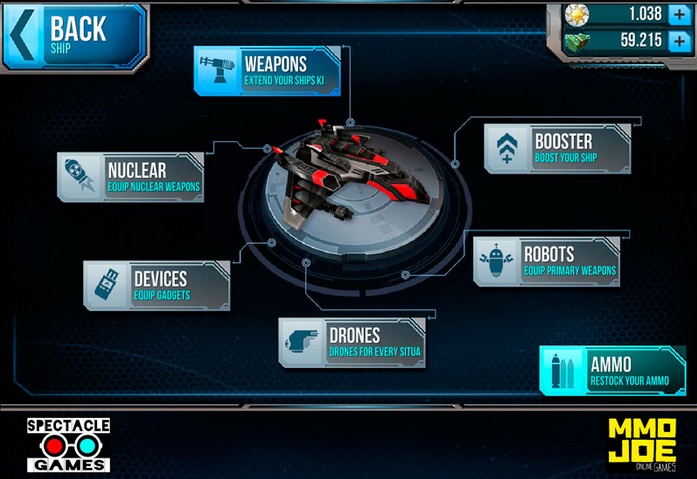 The player’s ship itself is another way for players to make their mark on the game, with Pocket Galaxy providing three classes of ship to choose from. Assault ships are the smallest class, and have limited cargo space, but their size means they have high mobility. Battle ships are the mid range class of ships that have the ability to build more advanced weaponry. The final class of ships is Capital ships, and these ships are the biggest class with a greater amount of weapon types available.

Every ship features five mastery levels – and this is an indication of how much experience the player has with using this particular type of ship. Players can improve their levels by earning Domination Points with the given ship type. And this mastery level isn’t simply for ego-boosting – as each level increases, the speed of the ship improves, the shield becomes stronger, the cargo space increases and the ability to use generators, robots, boosters and nuclear weapons is unlocked.

As is evident from the above run-down of features, Pocket Galaxy offers a veritable overload of features and gameplay options. For those looking for a new MMO experience which allows for both intense gaming sessions, and a more relaxed, casual gaming style, this may just be the perfect title. To have a look at the game in action, check out the trailer below. And if this preview has sparked a flicker of interest – check our twitter and facebook feeds over the next few weeks for your chance to score a special access key to experience the game yourself on PC, thanks to Spectacle Games.