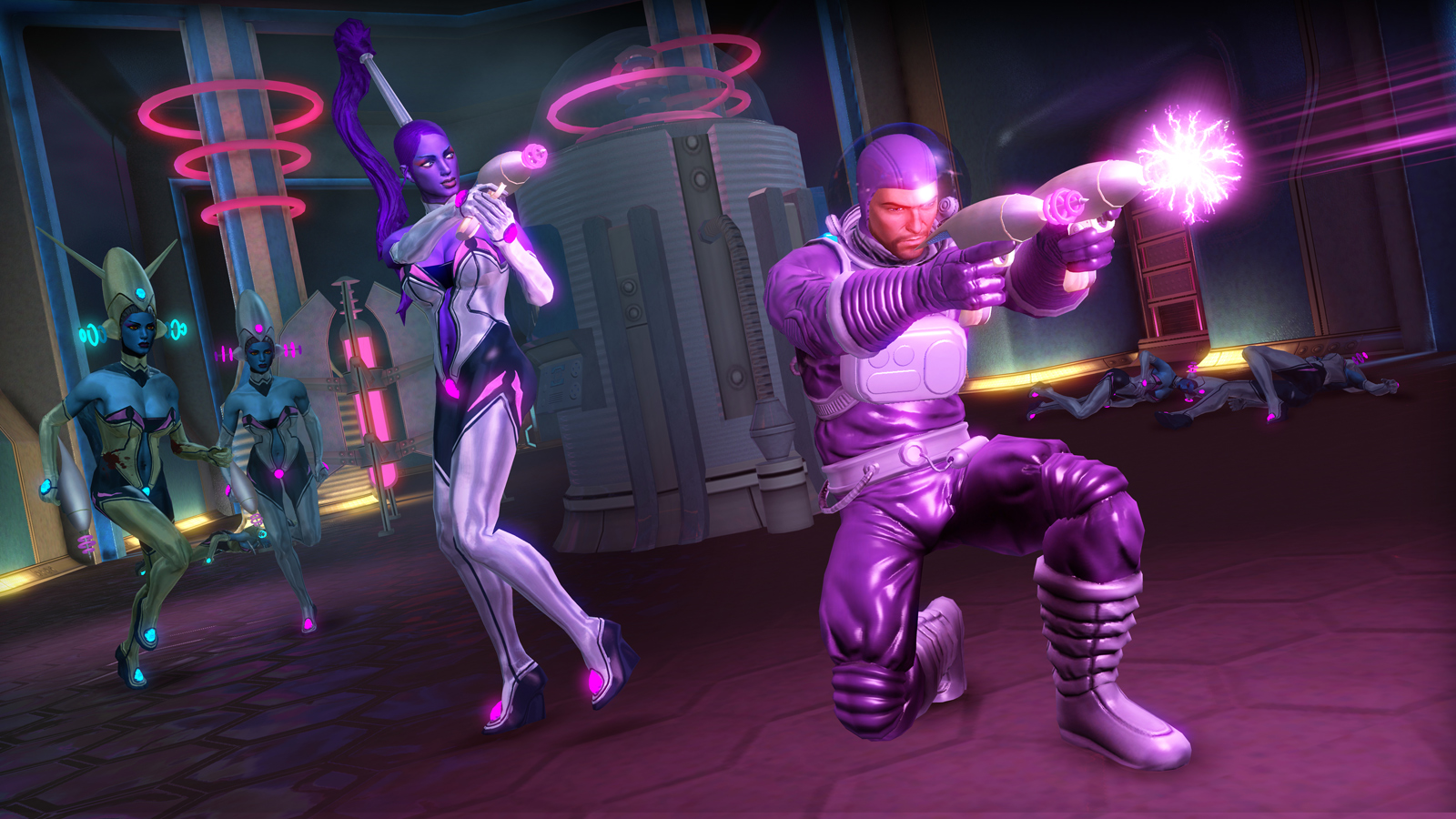 I have had Saints Row: The Third for nearly a third of the time I’ve had Skyrim, and I have put almost as much time in the shadows of Steelport’s glass mountains as I have Skyrim’s stone mountains.   When it came time to get my season pass for the promise of more ridiculous DLC, I grabbed it as soon as I was done with the story.  While Genkibowl was a bit of a letdown, Gangstas in Space doesn’t disappoint, but unfortunately it doesn’t dazzle either.

The long delayed Third Street Saints movie Gangstas in Space finally has a director, and he wants YOU to be the star!  The first of 3 missions introduces you to both the director, Andy Zhen and your bright eyed costar Jenny, who will be playing Kwilanna, your alien princess love interest.  From there you’re set on your first task, to rescue Kwilanna from the evil clutches of the national guard, whom you have fought many, many times before. Turret sequences, regular action missions and a pretty decent air battle all round out this new content which would probably take you around an hour and a half to two hours to finish.

Unlike Genkibowl where your character was essentially a mute, GiS treats you with more dialogue written especially for the missions.  I was surprised by just how much new voice work was recorded, mainly involving conversations and pep talks to Jenny and reactions to Zhen’s constant abuse.  The best part has to be the revelation that your character is an unbelievably terrible actress (I play as a lady, or in Mass Effect terms: Femboss) and listening to the intentionally stilted line delivery of hackey sci-fi is definitely a highlight.  There weren’t many cutscenes, so all this new dialogue usually takes place during the breaks in the action. 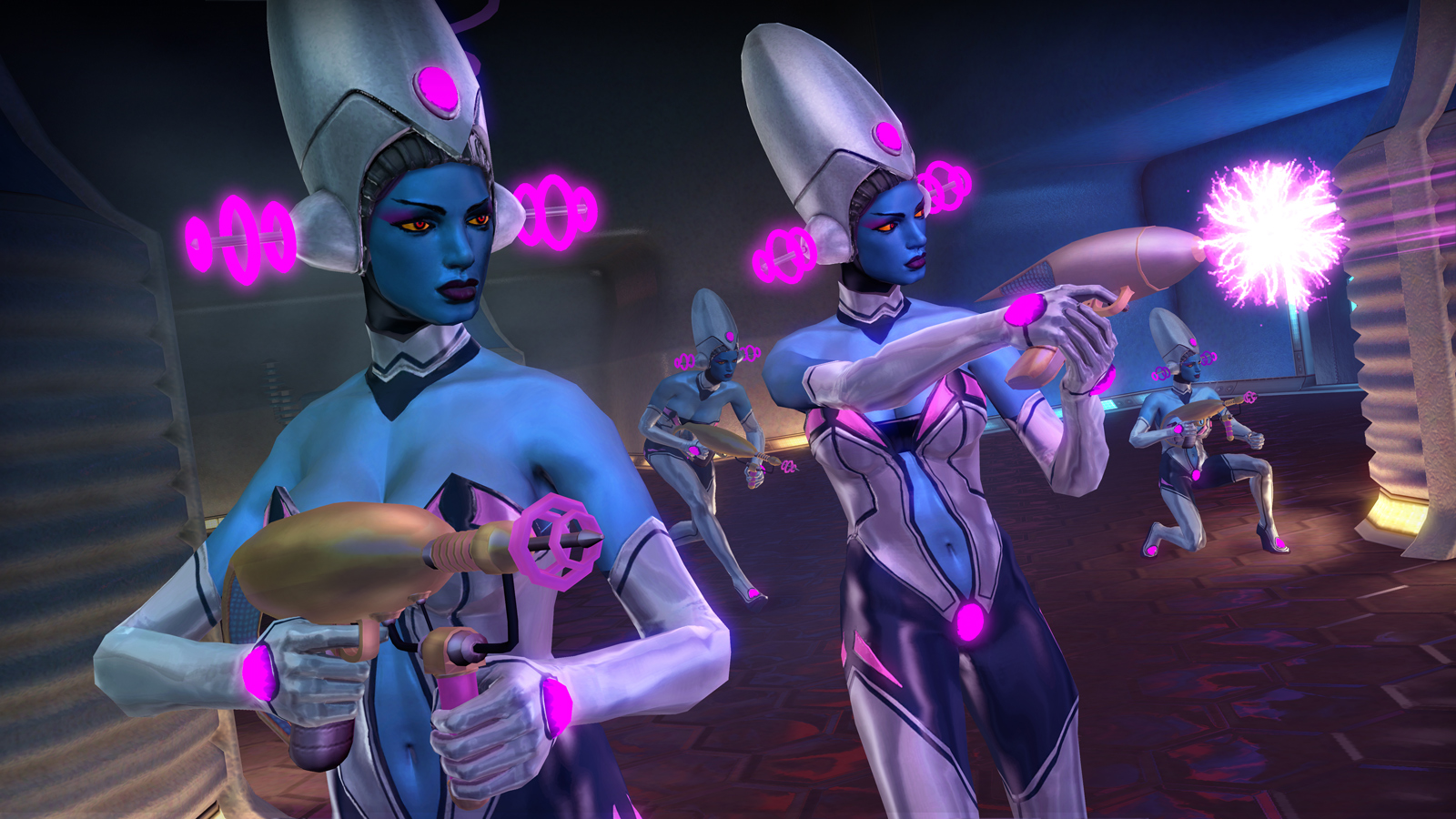 Visually there are only a few new assets and set pieces, most all of which appear in the second act.  However there is a great film grain effect that is used anytime you’re “filming” the movie. While playing I was hoping I could unlock that effect when I was done. When the film grain is combined with the new cinematic music and explosions you no longer feel like you’re playing Saints Row, but rather a game based off of Gangstas in Space.  If GiS was a real movie though, you can imagine it would look like a SyFy original movie directed by a sleep deprived Michael Bay.

The downside is that the story drags in the middle.  While running around a maze interrupted briefly by “defend this person while they do something plot related” points, you’re saddled with guns that have a recharge time.  Expect to see the phrase “Tap X to Cool” a lot since you can’t get many shots off without having to tap x…to cool.   Weapons with more power or less enemies to soak up the damage would make the combat flow quicker and alleviate this problem.  The story itself isn’t too compelling and feels wedged in, especially given that the filming of Gangstas in Space was an optional mission in the main SR3 game.  Finally, for all you achievement hunters out there, many of the achievements are specific to certain missions.  Complete the mission without unlocking the achievement and you’d better hope you have a save right before you started.

Volition worked so hard to give me a game that felt like one part Ivan Reitman and one part John Singleton.  It’s a shame between this and Genkibowl that the extra content feels so tame in comparison.  The humor that I enjoyed so much in the main game just wasn’t there.   It would be hard to recommend this add on to anyone that isn’t already looking for an excuse to go back to Steelport. If you do though, your $7 will snag you a couple of homies, some gang members, and two pretty cool new aerial vehicles.  Sure they’re basically re-skins of existing vehicles, but when you’re looking for those last few barnstorming spots, does it really matter?  While I don’t feel like Gangstas in Space was phoned in due to the extra cut scenes, voice work and mission variety, I’m hoping that they saved the best for last with The Trouble with Clones mission pack due sometime later this Spring.