Yes, it’s that time again.  No, not time to lock yourself in your bedroom, climb under the covers, and pray for God to make it Saturday again.  Saturday is gone.  It’s Sunday now, which means it’s also Kickday; the day we shed a some light on a Kickstarter campaign that needs a little love.  This week, it’s Super Daryl Deluxe.  How can you resist a name like that?  Read on to check it out. 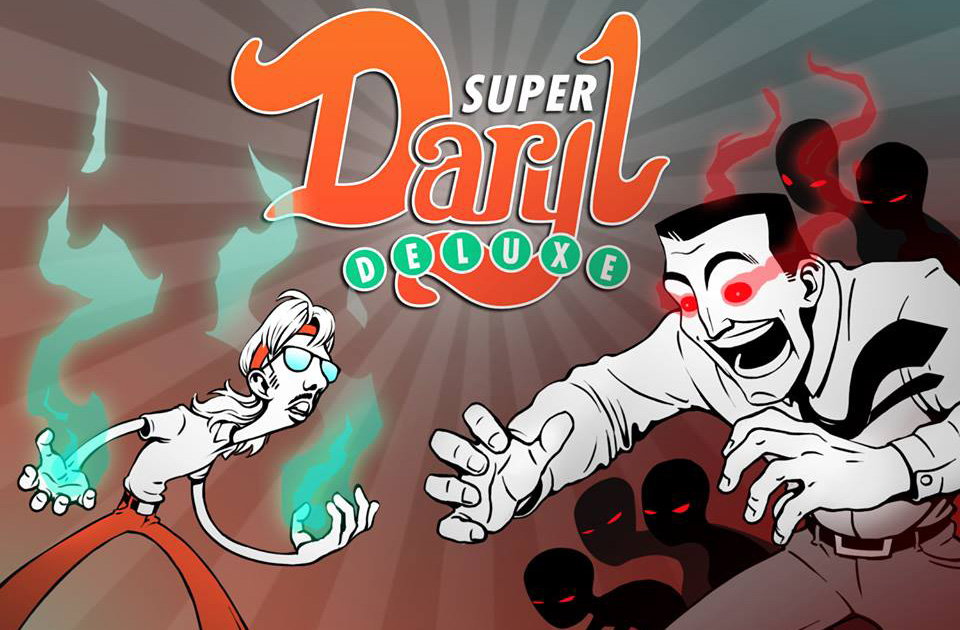 Super Daryl Deluxe, as the name implies, is the story of Daryl Whitelaw.  Daryl is a new kid at a high school that has been secretly taken over by evil scientists.  What is the evil scientists’ evil plan, you ask?  They intend to use the high school students as lab rats for their evil research into brainwashing.  Now, I know that some of you might be thinking that this sounds a lot like your high school.  But unlike your guidance counselor, the brainwashing going on at Daryl’s high school is being done through far more nefarious means than giving you bad career advice.  The scientists’ experiments have gone awry, turning portions of the school into bizarre otherwordly realms inhabited by homicidal monsters.  It’s up to Daryl to journey through these dangerous worlds, meet up with friends along the way, and vanquish the demonic hordes while hopefully uncovering the secrets of his high school.

As you can see,  Super Daryl Deluxe is a 2D side scrolling action RPG which features beautiful (and downright hilarious) hand drawn art.  The game uses a deeply customizable combat system which can be tailored to practically any gamers’ taste, unless you’re one of those people who only like world building games that move at the speed of tectonic plates.  Then Super Daryl Deluxe probably isn’t for you.  For the rest of you, though, the combat system includes dozens of special abilities that Daryl can learn as you progress through the game.  You can equip up to four abilities at once, allowing you to experiment and formulate the perfect monster smacking formula for your style of play.  Leveling up also unlocks new items and outfits for Daryl.  So if you’re not liking his standard bell bottoms, headband and mullet, fear not.  You’ll be able to deck out Daryl in a wide assortment of custom threads.

In addition to combat, Super Daryl Deluxe will feature numerous side quests which focus more on exploration and interaction.  As you’re undoubtedly aware, high school kids deal with a lot of crap.  They’ve got issues, and Daryl is the just the guy to help them out.  Aiding his fellow students with their troubles will earn him extras and bonuses which will help him on his quest to take down the evil scientists.  Completing optional quests will also increase Daryl’s social reputation, earning him new passive abilities.

Want to see the game in action?  Check out the trailer below, which features a customizable soundtrack.  I highly recommend The Final Countdown.

Super Daryl Deluxe is being developed by Dan & Gary Games, a fledgling company run by two RIT students coincidentally named Dan Plate and Gary Porter. They’re trying to turn a project that began as something to do with their free time into a full-fledged game that everyone can enjoy. Super Daryl Deluxe is their love child; something they’ve spent the last two years working on, and they would like nothing more than to see it brought to fruition. Well, maybe there is something they’d like more. I don’t know them personally. But suffice to say, they want to finish this game. So they’ve turned to Kickstarter. Currently, 36 backers have contributed $2200 of the campaign’s $7000 goal. With 26 days to go, they’re offering the following pledge tiers.

I don’t know about you, but I think $7000 to become the best friend of two cool as hell RIT students sounds like a bargain.  If Super Daryl Deluxe looks like the kind of game you might be into, Dan and Gary have released a demo which you can download here.  Just keep in mind that it is a pre-alpha build of the game, and bugs are almost a certainty, so don’t judge it too harshly.

So if you like the look of Super Daryl Deluxe, and you’ve got an extra fifteen bucks lying around, why not make this Sunday a Kickday, and make Dan and Gary’s dream game come true?  In addition to their Kickstarter page, you can follow the progress of Super Daryl Deluxe on Facebook and Twitter.