Yesterday I had the great privilege of representing the folks at Save Game at Sydney Supanova; a pop culture expo that tours the country with stars from all corners of Geek culture. Not only was it my first Supanova but it was also my first convention of any size or shape. And putting it bluntly – it was a hell of a way to get my feet wet.

As I made my way there, via 3 trains and a short bus trip, I was in two minds about the event. As excited as I was about entering the closest thing to a Nerd Nirvana or sanctuary that I have ever heard of, a small part of me felt nervous. I felt like a kid again on my first day of school. It sounds silly now but at the time I was so caught up with the idea that a culture, a community that I identify myself with, might not accept me. Any and all of those apprehensions dispelled immediately as soon as I made my way through the gates.

It was like entering another world. A world filled with Sailor Scouts, Storm Troopers and Daleks. I was home. We all were. I arrived at 10.30 and already Olympic Stadium was packed to the gills with patrons dressed to the nines. The narrow walkways between stalls were so cramped that I was literally brushing elbows with the likes of Captain America, Hellboy and the odd Batman. Definitely not something to complain about. The vibe on the floor was intoxicating. This may just be the fact I was surrounded by my favourite characters but regardless of the cause, everyone was feeling it.  We were all there for different reasons. Supanova celebrates so many different branches of the Greek sub-culture from comics to video games and fantasy to sci-fi but there was an undeniable feeling of camaraderie.

Everyone was quite happy to have their picture taken and tell us the story behind their costumes. I talked to a group of 4 men who had on Saturday dressed up as the TMNT boys but on Sunday had mixed things up and came as Deadpool, Captain America, Doc Oc and Rhino.  These gents, deservingly, turned out to be quite a crowd favourite, posing in some epic fighting stances that made for some great photos! Even our good pal Ezio received a sartorial homage. This good looking trio were cemented to the floor for a good while making sure no one missed out on a picture! 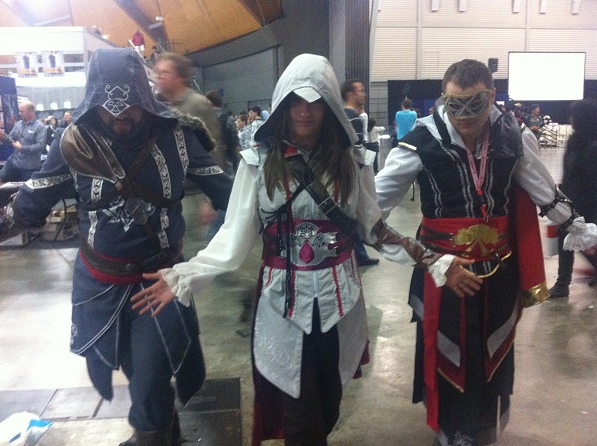 Caped crusaders Batman and Superman lived up to their good-guy personas not letting anyone miss out on a shot with the dynamic, crime fighting duo; including one pint sized Save Game contributor. I also snagged a picture with a very…flirty Darth Vader.

And then, what I call my Mass Effect afternoon began. Kicking off with meeting this girl in a fantastic homemade N7 armour that she had been working on since April. Can you guess who showed up next? Well, Garrus of course. Put it down to the stars aligning or divine intervention but there I was; in the middle of a Shepard and Garrus sandwich. And it was glorious. His costume was perfect. Every little detail was there and it was flawless. And honestly, for a moment you couldn’t see the man in the costume – it was that well done. I felt as if I was on the Citadel, perhaps on my way to Chora’s Den, and by some crazy happenstance I had bumped into him. One down side of that fantastic costume was that the poor guy couldn’t see his own feet! Both of them, like just about everyone else, was a great sport when I asked for a photo. 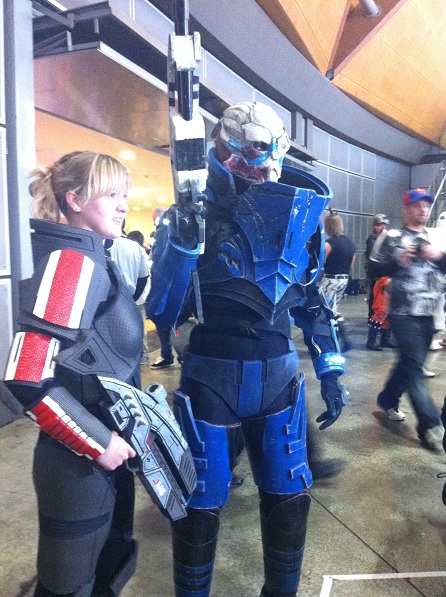 I then was lucky enough to interview both Tricia Helfer and Jennifer Hale. Both of these women were as friendly and kind as they were gorgeous. You can read the transcripts of the interviews and listen to the interviews themselves on the site later in the week. Meeting them and being able to talk to them about their success and careers was without a doubt the highlight of my time at Supanova. This would not be the last time I would see the talented Jennifer Hale. I had my photo taken with her. I, at the time, was barely aware I had even bought a ticket to do so! I had just floated right out of the interview room I was in all the way back down to the main floor. Continued to the Supanova store kiosk and purchased a ticket to have my photo taken with her. I was so excited. I was jumping up and down in the line waiting to have our photo taken. Usually, this would warrant an odd look or two. But not at Supanova; and I think that’s what makes events like these so fantastic. There’s no judging. We’re all there because we wanted to be there, because we loved it.

So, it was finally my turn and Jennifer greeted me warmly with an “It’s my interview girl!” I don’t think I wiped the grin off my face until I woke up this morning. Now, you’d think meeting her twice in the span of an hour would be enough for me to call it a day. It wasn’t. When she returned to her table to sign more merchandise for fans I was right behind her. It was lovely; she even remembered my name. I later saw her being accompanied upstairs and she smiled and waved. She really deserves the fan base she has and you can tell she has a great respect and love for them. I promised myself when I wrote this that I wouldn’t gush about meeting her but a large part of why I’ll treasure the memory of my first Supanova is because of her. As I was wrapping up my interview with her I had told her that meeting her had made my decade. I wasn’t exaggerating.

The rest of the afternoon was spent looking at the stalls that filled the stadium – circulating many of the merchandise stalls. I’m always looking for a good bargain. There were no shortages of comic books, toys or memorabilia to buy; just a shame my wallet was beginning to weep not long after lunch. I had a look at a few of the indie game stalls towards the back of the main floor. Any hand-eye coordination I have was completely lost when I played their demos. There’s something about having someone watching me play that makes me panic. W is S, D is A, shift is space…I think you get the idea. It was great fun getting to talk to a few of the guys working on their respective projects. 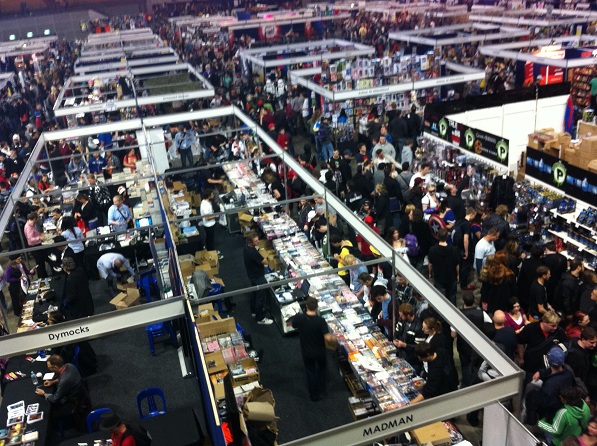 It was now around 5pm. The guests were getting ready to go home and many of the stalls had been wiped out. After a long day of running around the busy floor taking pictures of anyone and everyone I was exhausted. Content, but exhausted. I had gotten all I had wanted out of the day plus a lot more and it was time to go home. My experience at Supanova was one I would not exchange for anything. It allowed me to meet fantastic people (as much as I gushed before, this isn’t limited to Tricia and Jennifer), that had the same interests and passions as I do that I might not have ever met otherwise. It was great seeing everyone get into the convention spirit. Compliments were not just reserved for those that spent months and possibly hundreds of dollars on costumes and even those just in a Batman t-shirt or with a Spiderman mask on got in on the action. I think that speaks a lot about the atmosphere and the vibe at Supanova. It doesn’t matter if you don’t have the best costume or any costume really because while that is a part of it, it isn’t what Supanova is about. It’s the coming together and expression of a love for all things fantasy, sci-fi or gaming. It’s about the community. And that’s what I’ll be taking away from my time there.

I’d like to take the time to thank Save Game for allowing me to represent them, everyone that let me take a picture with/of them, Tricia and Jennifer for being so kind to this very nervous interviewer and Lionel, Supanova’s publicist, who kindly organised the interviews for me.

Editor’s Note: I’d like to thank Rebecca for attending Supanova on behalf of Save Game. Her interviews with Tricia Helfer and Jennifer Hale (along with transcripts) will be uploaded to the site over the next few days. Photos from the day will also be added to our Facebook page in the coming days. So keep an eye out – because Rebecca’s interviews and photo’s are must-sees!