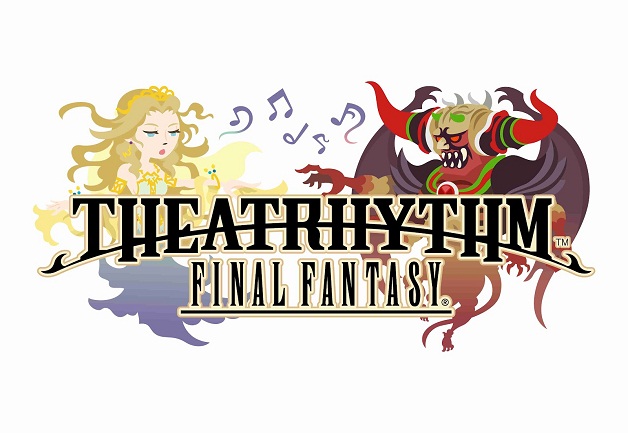 Theatrhythm: Final Fantasy is the Final Fantasy 25th anniversary game I didn’t know I wanted. I was suspicious about a rhythm game that uses Final Fantasy as a backdrop, but was surprised how well it works. It manages to be nostalgic in just the right way, while being a completely fresh approach the series’ legacy. While I have seen comparisons to the DS game Elite Beat Agents, this has more in common with Guitar Hero/Rock Band and Rhythm Heaven given its note highway and the ability to tap anywhere on the touch screen.

The controls are simple and since there are only three types of notes to hit (single hit, tap and hold, and directional swipe) it is easy to pick up. You will be tapping these notes out on the three types of stages you will be playing on. Field stages use tap and hold notes to slide in a wave according the music, this is usually some sort of overworld music. Battle stages use fight themes and feature your party battling enemies from that particular game. Finally, event stages feature a montage of key moments in the game coupled with a memorable piece of music while you tap out notes riding on a winding rail.

SquareEnix goes far to give all the games a unified look, giving characters and enemies a sort of marionette design.   The characters themselves are surprisingly customizable, since you can equip abilities or magic including buffs, offensive and defensive spells to be used during the stages. For the most part, the characters are true to their original games (For example: Terra is a magic user and Tidus has a high agility rating). The character design for the Final Fantasy Warrior of Light is questionable though, since he doesn’t resemble any playable character in the game.

There is a meta-game that involves collecting Rhythmia, which is awarded by how well you do in a song. There are ways to eek out more Rhythmia such as having a character appropriate to the game you’re playing in the party or playing every day. Your Rhythmia is used to unlock characters, more playable songs, and other extra content. 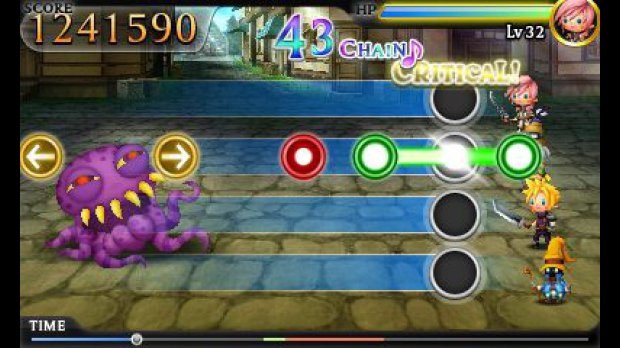 A typical battle, clearly on Normal since the screen hasn’t been broken in half yet.   Credit: ComputerAndVideoGames.com

The bonus content is the most disappointing aspect of Theatrhythm. For a celebration of the series that made Square a major force in the game industry, it is a surprise that it would be so light on additional content. You are rewarded with music tracks, which would be nice if you weren’t already listening to these songs over and over. The theater unlockables are the cinematic montage of the event stages. The major let down here is that the text is in the original Japanese, so unless you already know the story, there is nothing interesting about these movies. This oversight is surprising since it negates the “Oh I remember that!” feeling that you get that makes nostalgia such a powerful force. I could understand not translating for Two, Three, and Five since they were never released over here in their original forms. They could have used the visuals for the updated versions released on the GBA, Playstation or DS, but that is counter to what they were trying to accomplish on Theatrhythm. The final bonus content comes in the form of in-game collectible cards featuring the in-game artwork that are practically begging to be made into physical cards.

What makes this difficult to score is due to it being steeped in nostalgia, your personal history with the franchise will determine how much you will enjoy it. My history consists of playing the first, fourth, sixth, seventh, eighth and tenth games to completion. Despite trying a few times I just could not get into playing Five, Nine, and Twelve, while a sealed copy of Thirteen sits on a shelf. As a result, my play counts for the games I’ve played through are high, while the ones I have very little attachment to have one or two cursory playthroughs. If you have a long history with the franchise, this game is for you. Each song has three difficulty levels and extra-challenging Dark Notes that will test both the durability of your 3DS screen and your patience, so there is no shortage of re-playability contained within. All I ask for in the future is more bonus content and a way to create a playlist of unlocked songs.

Theatrhythm Final Fantasy could be the first of many Theatrhythm games. I now feel like I need Theatrhythm Chrono Trigger in my life but I ‘m more likely to get a Theatrhythm Kingdom Hearts. Nostalgia aside, this is still one of the best rhythm games out there, and one of the few reasons to leave your 3DS charged.