Every one of us has a unique style of gaming.  How we play, what we play; it makes us all feel different things at different times.  Some of us are drawn to shooters, others to MMOs, others to casual mobile games that kill ten minutes of time on the bus.  Informing that are our differing lifestyles, different habits, and different goals.  I’ve started wondering lately just how my gaming style affects my life, or vice versa, and I’m finding some interesting, occasionally unnerving comparisons.

A wise man, I think Confucius, but who cares really, said “If you chase two rabbits, both will escape.”  This quote struck a chord with me and forced me to really sit down and face some of the issues I have.  Without going into too much personal detail, I can tell you that for roughly my entire life I have battled some depression and anxiety issues.  Through counseling, brief periods of medication, and a lot of hard work I’ve gotten to a place of being able to handle it all, but that doesn’t mean it doesn’t pop up in unexpected ways.  It even rears it’s head sometimes in the way I game.

I have always been an individual with many ideas.  They bounce around in my head like, well… rabbits I guess.  I’ll have an idea, run with it for awhile, then see a different shiny, fluffy rabbit bounding off in a different direction and want to chase that.  It’s been my modus operandi for as long as I can remember.  I find a goal, get really excited about said goal, work really hard toward that goal for a little while, and then lose interest completely and move on to something new.  I even went all the way through reflexology training stopping just short of getting my certificate to practice.  I had touched all those sweaty feet for nothing (gross).

It’s difficult for me to stick with one idea, one goal, and see it through.  I can admit this.  I don’t think it’s a terrible thing for someone to admit.  I guess on the scale of “I killed a man” and “sometimes I don’t finish what I start” that’s pretty mild. 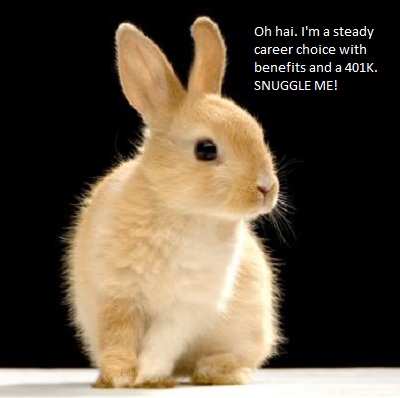 That sounds great and all but there’s a “kazoo world champion” rabbit over there.

I’d always sort of known these things about myself, but it didn’t click into place until one day when I signed onto World of Warcraft and realized I had seven or eight alternate toons just sitting there doing nothing.  It sounds strange to have this kind of revelation about one’s self as one is biting into a microwave burrito and entering their battle.net password.  But there it was, like someone had just told me I had a mole on my face for the past 32 years that I’d never noticed.  I stopped chewing my burrito for a moment (just a moment) to think about this.

I have been playing World of Warcraft pretty much since it’s release eight years ago.  It’s been on and off, I even canceled my subscription once, but I used to play with the kind of regularity that people make jokes about; unshowered, sweat pants clad, junk food binge fueled dungeon raids, and a guild that was like family.  I even used to skip work to play, and I can say with some certainty this particular time was probably the worst time for my depression and anxiety.  WoW offered me a kind of escape, like most games do.  I have to admit it also probably exacerbated my problems.

In that escape, where I spent so much time grinding, looting, raiding, looting, grinding I never fully reached the top level with my “main” toon.  Even now, today, I’ve still not gotten her beyond level 72.  My poor mage will never reach level 85.  She has been abandoned in favor of a dozen other alternates.

One or two of these alternates had made it pretty far in the game, but as I stared, mouth full of beans and cheese at my screen, taking stock of my different races and classes, I realized that they were all metaphors for how I lived my life.

Then other comparisons seemed to claw their way to the surface.  In The Sims 3, I make a sim, give them a house, get them a job, invite their friends over, and generally invest a butt ton of hours advancing this sim in their chosen career path or their relationships.  And then I think, “…maybe I’ll make a new sim and she can be a police officer instead of a writer.”  So I do.  And this happens over and over again until my little Sim town is filled with half developed, unfulfilled little sims just waiting to reach their full potential. 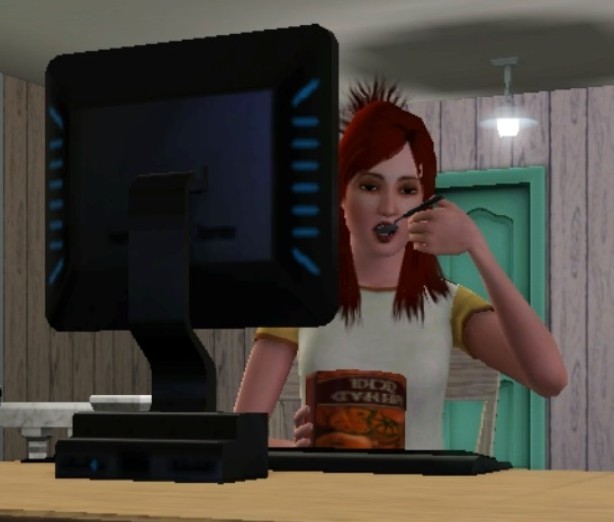 An accurate depiction of both my life AND my sim’s life.

Perhaps the most depressing thing about this is that all of their stories kind of do evolve, so if I make another sim in the same town, my new sim will likely run into my previous sim at some point.  And this previous sim will be “older” than my new sim, which means she will get visibly old, which means she will eventually die.  More than once I have watched previous sims get old and die, still having never reached the highest level of their career, still having never learned a single new recipe in the cooking skill, still never finding love or making any real friends.

All of these realizations stopped every single rabbit in its tracks (yeah I’m back on the rabbit thing) and I realized that I had to choose just one to chase down.  There were too many rabbits, all vying for my attention and as a result I wasn’t focusing on any of them.  It even took all my effort to just sit down and write this article because I have so many ideas to write about that I often become overwhelmed and don’t write anything.

It’s a tough decision, choosing which rabbit, which goal to chase, but I knew I had to choose one.  So I pointed at one of them, said “you” and I’m now running after it full force.  It’s difficult to let go of the other rabbits, but the other ideas will still be there somewhere, ready to be chased later, I suppose.

This idea has since bled into my gaming life.  I’ve decided as a sort of personal therapy to force myself to reach that top level in Warcraft, to stick with one sim and help her achieve her dreams.  This is all very silly and seems pretty corny, even to me.  But as gaming can be an analog for real life, I see it as a life exercise, a conditioning of sorts.  I’m happy that gaming can be a part of my growth it since gaming is a huge part of my life.

I wonder about the rest of you, how your lives affects your gaming habits and how maybe your gaming habits affect your lives.  If you don’t know, it might be worth some examination.  You never know what you’ll learn about yourself, and who knows, maybe playing games can or  will help with it.  Game on, everyone.  And catch your rabbit.