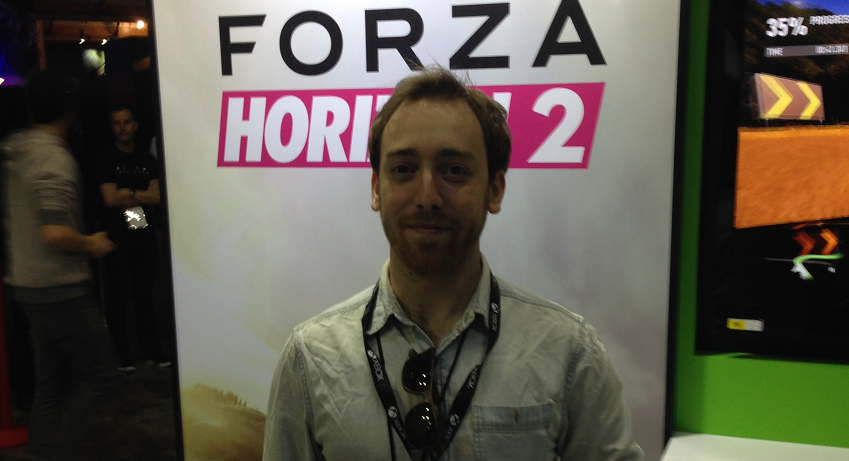 As part of EB Games Expo, Save Game were lucky enough to have the chance to interview Ben Penrose, Art Director at Playground Games, the studio responsible for Forza Horizon 2. Up for discussion were a variety of topics from weather features to car damage to classical radio stations. Check out the full interview below.

Forza Horizon 2 is set in both Northern Italy and Southern France. Were these areas chosen because of the racing pedigree in Europe?

Ben Penrose: Actually that’s not really one of the reasons at all. The reasons we picked the place were because we dissected the original game and found out a lot of people were identifying with a number of themes and one of them was this idea of what we dubbed ‘Horizon Beauty’ which was the types of things we chose to represent in the game,so they were always very picturesque, naturalistic type landscapes and when we started Forza Horizon 2 we looked at that area of the world and it was just littered with that stuff. We had all the things we would ever need to fill that ‘Horizon Beauty’ vessel so it was a no-brainer.

Forza Horizon 2 has the new dynamic weather features where the weather can change mid race. How will this affect players as they are racing? In off-road tracks will players have to contend with a loss of traction and mud flying through the air?

Ben Penrose: Its all completely linked into the physics system so it completely changes the way the cars handle and it adds a whole sense of variety to the races because you can experience a race in the dry or you can experience it in the wet or they could change mid race. Speaking as the art guy it gives you this whole new sense of variety to the world and just the way it looks because everything transforms in the rain, the clouds get really thick, the atmosphere rolls in and you have the rain hitting everything and making it shiny and reflective.

The Forza series has always prided itself on the cars being able to receive damage during races. As I mentioned just before the start of this interview, I destroyed one of your cars in the short playtime I just had. Since it would be horrendously expensive to smash up the cars for real, how do you guys overcome that to make the damage as realistic as possible?

Ben Penrose: Its the same as anything in a Forza game really. You dissect exactly what it is you are trying to do in as much detail as you can and try and replicate all those nuances until you get something that works. Quite often to get something to look believable it’s about a culmination of lots of very small details that you might not necessarily notice as a player experiencing the game at the time but yeah its all of these things put together and the damage is exactly the same.

While Playground Games have developed Forza Horizon 2 for the Xbox One, the Xbox 360 version has been handled by Sumo Digital. Did this remove any limitations to the game world that has been created that would otherwise limit what you could do?

Ben Penrose: The reason that whole split happened was because Playground wanted to concentrate entirely on what we were doing with the Xbox One and we wanted to squeeze as much horsepower out of the machine as we possibly could at the time and so that is the reason that switcheroo happened in terms of the two different studios doing the different versions.

How has working on the next-gen Xbox One allowed you to push the boundaries of what you were able to achieve in the original Forza Horizon? Were there any unexpected difficulties you were confronted with and had to overcome?

Ben Penrose: I’ll get the negative out of the way first. In terms of difficulties, the only difficulties we came across were exactly the same anyone would come across when developing for a brand new piece of hardware. There is a period where you have to learn to understand what its all about and what you can do with it, and quite often they are less problems and more about moments where you go “oh hang on we can do this” and I think in general, games coming out now and in the near future we are going to see a huge leap in terms of what we are seeing and it’s going to be a really exciting time actually.

Ben Penrose: And that’s what I’m saying, it was more a case of us going “oh we can do this and do that” and it was a really fun process actually because for the first time, for me at least because I joined the team at the end of the previous console generation where the guys had maxed out what they could do on that piece of hardware, this time it was just full of surprises and, speaking as an art director, all of a sudden you have all these opportunities and new ways of representing something you’re trying to put across in terms of a visual.

So was there any one thing that you were thinking “How am I going to do this” and then you thought “Oh wait that’s easy” or at least “I’m able to do that”?

Ben Penrose: Yeah actually, I think one of the things that was really surprising was the amount of foiliage and plant life we could put in the world because we stream that world in really fast because those cars move incredibly quick, so it’s a big technical hurdle to be able to render that as quickly as we can and right at the beginning we started populating the hills with all those trees and bushes and I remember at the time thinking “Are we going to be able to this that quickly?” and it wasn’t a problem with the machine it just did it.

One of the things I am curious about is will I see any wildlife while off-roading?

Ben Penrose: There is…. We have birds all over the place.

So if I am playing in front of my daughter I wont have to swerve to avoid a rabbit for fear of scarring her for life?

Ben Penrose: (laughing) We would genuinely not want you to be in a situation where you had to explain to your daughter why you murdered a bunny rabbit.

Finally in Forza Horizon 2 there is twice as much music included as the original and I’m guessing you guys have had plenty of time to test it out, drive around and see the sights you have created. What is your favourite station/track to put on while you cruise around and take in the sights?

Ben Penrose: That’s a very easy question to answer, it’s the classical station. For the first time we have an all classical station in the game and there is something about driving around the Italian landscape in a Lamborghini to some beautiful classical tunes. It epitomises Europe for me for some reason and it’s just great.

Save Game would like to thank Ben for his time. Forza Horizon 2 is out now for Xbox 360 and Xbox One. For more information, take a look at the game’s official website.