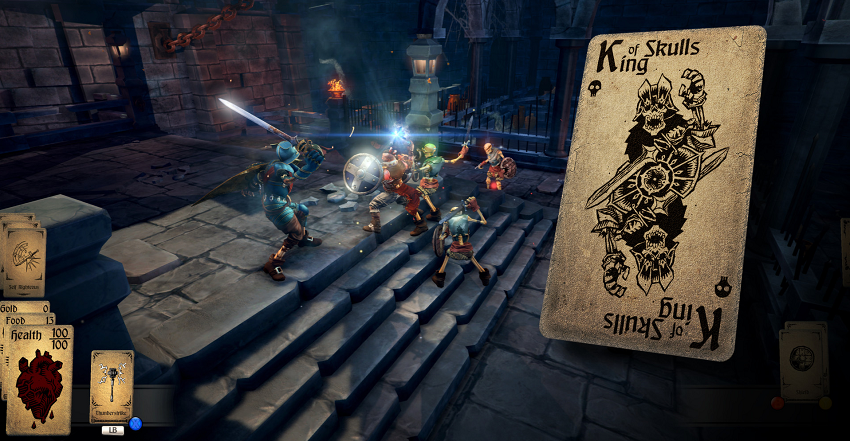 If there’s one thing we here at Save Game like more than supporting indie devs, it’s supporting Brisbane based indie devs. At PAX Australia 2014, we had the pleasure of chatting with Kim Allom, the Associate Producer at Defiant Development, a Brisbane studio who are currently developing Hand of Fate. Check out the interview transcript below.

A quick primer about Hand of Fate before we dive into the interview – Hand of Fate is a hybrid action-RPG and deck building tabletop card game, where the player builds their set of cards into a deck, which is then used to deal out the dungeon floors through which you adventure. When entering combat, the player is treated to seeing all the cards they have collected fly into their hands as fully modeled 3D assets, with combat beginning soon after. The game itself has been described as a tabletop card game brought to life, with visceral action-RPG combat and hundreds of encounters, items, armor, weapons and artifacts. If this short summary has piqued your interest, you can find out more about the game by checking out its Steam Page, or kickstarter page.

Save Game: What are you showing off here at PAX?

Kim Allom: At PAX we are showing off our baby, it’s called Hand of Fate. It’s an action-RPG, rogue-like deck builder where the cards come to life. So essentially, if you love card games and you love action games and board games, then this is our love letter to you.

Kim Allom: The cards are our mechanic to showcase the dungeons that you adventure through, as well as the equipment, the magic items, the enemies as well that are randomly drawn throughout your adventure.

Save Game: How many cards does Hand of Fate feature?

Kim Allom: At the moment there are over 300 encounters, and that’s just encounters. In terms of equipment, we’re actually working on building more equipment as well so counting wise, maybe 200 types of equipment. In terms of gameplay, you’re looking at about 12 to 18 hours.

Save Game: So if I play, and another of my friends play, can we have a different experience based on the decks we choose?

Kim: Absolutely. So being rogue-like, everything is randomly generated, so no run through is ever the same.

Save Game: I’m very interested in Hand of Fate, because you are a Brisbane based studio – tell us a little bit about the journey to PAX. Where have you come from and what are you hoping to achieve with Hand of Fate.

Kim: We’ve been on the PAX circuit for the last year with Hand of Fate. We went to PAX East early this year over in Boston, then we were at PAX Prime a few months ago in Seattle, and now we’re at PAX Aus, which we were also at early last year as well. So, our journey has been transformational in terms of Hand of Fate at least. What I mean by that is that we had one guy who came into the booth who said ‘I played your game last year, and I thought it was good, and I haven’t touched it since. I came into the booth today, and I’m playing it, and I’m blown away by how much it has transformed. I am going to buy your game.’ And the reason for that is we went through kickstarter, we went through Steam early access and Greenlight, and what we did was we focused heavily on public consultation. And with that public consultation we were looking at the Steam forums, the kickstarter forums, and we were physically getting all of these amazing ideas from our fans, from the people who love Hand of Fate, and saying ‘yes, we want that in our game.’ So kickstarter and Steam early access really defined our audience and so that’s really helped us transform the game to what it is today. 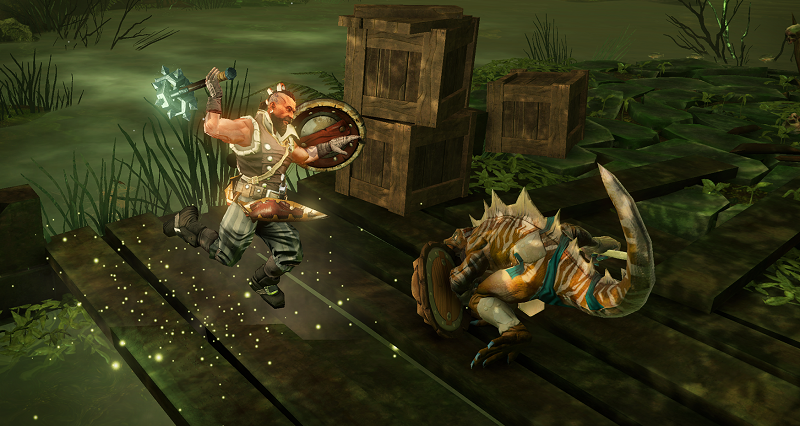 Save Game: What’s one of the inclusions you’ve got from public consultation that’s now in the game?

Kim: Deckbuilding was not originally part of our game and now it’s a major part of our game. Funny story actually – Derek Hollins whose behind PAX, came to our booth at PAX Aus 2013 and said ‘You know what this game needs? It needs deckbuilding.’ And then other people on the forums said that that was a great idea, let’s do that. And Morgan, our creative director was just ‘done. Let’s put it in.’ Let’s put it out there to the public and see what they think, and it was received really, really well, and now it’s a major part of the game.

Save Game: For players who might not be too familiar with Hand of Fate, what’s the one thing you want them to know about your game?

Kim: We want them to know that if you haven’t heard of Hand of Fate, and you love card games and you love board games – this is your game. This is a game made for those players because we have gone through the motions of physically finding you, because you came to us through kickstarter, through Steam early access. We’ve defined our audience, and this is the game for you.

Save Game: Five words that you would use to describe Hand of Fate?

Save Game: So when can people grab Hand of Fate?

We’d like to thank Kim for her time in answering our questions. For more info on Hand of Fate, take a look at its Steam page here. We’ve also included the Hand of Fate Early Access trailer below which showcases the game in action.