At PAX Australia, Save Game were lucky enough to sit down with Max Chuvalov, PR and Marketing Product Manager at Wargaming to discuss World of Warships. We spoke about a variety of topics, from lessons learned from previous games, to what players can expect to see from a gameplay perspective with World of Warships. The full transcript from the interview is below.

Save Game: World of Warships follows other Wargaming titles like World of Tanks and World of Warplanes. Will players who are familiar with these games see familiar gameplay, and has Wargaming acted on lessons learned from previous games to improve the experience?

Max Chuvalov: For sure. It’s the third game in our warfare trilogy, and a big title for us. The basics of the gameplay will be familiar to players of all our other titles and the progression system will be somehow familiar, and economics. But I think here, all the connections end. We are planning to introduce completely different gameplay, battle gameplay, which is based on the four classes of ships that we have in game, three main classes – artillery classes as  we call them – which are destroyers, cruisers and battleships which form like rock, paper, scissors gameplay. So each attack, each class is vulnerable to one of the others and is deadly for one of the others. And the fourth class is a standalone class, a support class which is the aircraft carrier. This is more like the real time strategy for gameplay. The gamer will see the battlefield from birdseye view – from top-down – and control their squadrons of different airplanes to destroy enemy airplanes and warships.

About about the experience learned – these titles were immense experience for us on all levels like development and publishing and working with the community. One of the biggest changes that we want to introduce is a very friendly environment for newcomers, for new players, because when world of tanks launched four and a half years ago, it didn’t even have a tutorial so it was a very aggressive environment for players, PvP from the start. With World of Warships we’re aiming for having custom PvE missions for players. The player will start with small Tier 1 warship, easy to navigate and it will have one or two canons which are very easy to shoot and operate. So they will get used to how to control their ship in PvE missions. So they will be playing against bots with bots in their teams, so very friendly, no pressure, you can learn, you can study small-based battles. When they progress to the next Tier of ship, they will unlock other classes of warships, learn it, and they will be able to operate with their team-mates as players against AI. Only after that is when they will unlock all the classes, when they will get first knowledge on the operations system, how to operate your ships, how to use your credits and experience game in battle, the economics system. They will be able to enter completely PvP missions when they feel they are ready. So for PvE we will also reward players with experience, with credits with lower amounts and lower rates than PvP but still, they will be able to learn to operate their ships.

Save Game: From a battle perspective, it’s been announced that maps have their own personality and their own flow, and that the Atlantic, the Pacific and the Arctic are all going to be featured. What’s your favourite map and why?

Max Chuvalov: I like Arctic maps, also some of the Pacific maps are very fancy to me, I like islands, the Bahamas and everything. Also I like the features of our maps where weather conditions are implemented. So we are working very hard on it, and right now we have foggy areas and thunderstorms on the map which are static and each time you load the map there are the same weather conditions in the same places. But we are aiming at right now, experimenting with a system where each time you load the map, it will generate weather conditions and it will differ from previous battles on the same map. The next step after this will be the dynamic weather conditions which we are implementing as well right now. So, for example, you will start in the middle of the map and there is a huge thunderstorm and it will move along the map through the battle. So technically it’s already possible with our development teams, but it provides many challenges gameplay wise and balance wise, becase it’s very hard to balance about how it will influence gameplay with PvP and both teams, it brings a lot of random factor, so we will work with it, we will play with it and experiment but it will bring huge replayability for our maps.

Save Game: The ships are obviously the stars of the game. You’ve got light cruises, battleships and destroyers are all featured. Tell us about the level of detail involved in bringing these ships to life, and what sort of research went into recreating such huge ships.

Max: We have three main classes, which are destroyers, cruisers and battleships. Each class is very detailed, we gathered a huge department of historical consultants, who are formed of former military guys, of historians which work for museums et cetera, and their main work is to contact museum’s private collections and military organisations and get their hands on exact blueprints. So we are in touch with many museums we are working with and some of them already ask us to provide some of the models of ours, to their museums. It’s a mutual collaboration. To create such ships it can take from two to six months work, with some models up to a year. So it’s a lot of work for a big team and that’s why we increased the development studio in St Petersburg through the year because of loads of work and technically speaking, if you take one turret of a big battleship, the number of polygons in it equals, on average, the number of polygons in each World of Tanks model. So one tank equals one turret technically on the ship and if you take a ship there will be hundreds or even more times detail than World of Tanks. So it’s much more work, but we love our ships and we do not have a right to make a mistake or displace any bolt in a ship because among our community there are lots of experts who will point out and say that we are faking with this bolt that’s two centimeters away when it shouldn’t be. 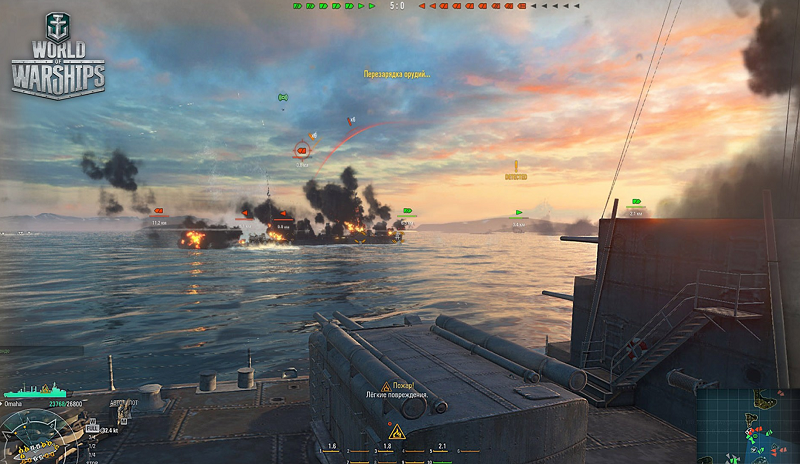 Save Game: World of Warships is an MMO game. Tell us about the social aspect of the game and how much interaction there actually is.

Max: Correct, it’s an MMO, and across all our titles, all our games that we have now, we have an approach to the game as a service. We’re not launching box titles where you have sales and then you’re not supporting the product, or you have subscription and the players play and you have one update per year. We’re constantly updating and working with players based on their feedback. We’ve got one per month or two per month updates with new content, with bug fixes, with balance features, with improvements of graphics and physics in the game. So if you take World of Tanks – four years ago it was a completely different game. The engine has progressed hugely as you may know, we have the development studio Big World in Sydney, based in Australia, which develops the engine for all our titles, all our MMO’s. If you take World of Tanks and World of Warships – completely different paramaters should be applied to this engine, because in Warships you’ve got huge water and six times bigger maps than World of Tanks.

And speaking of socialising – this approach to the game as a service includes community support, it includes customer service. That’s why we have offices around the world, to provide necessary operations and necessary publishing efforts in each region with local specialists because for example, talking about Japan, only Japanese people will know what is needed, how to properly communicate with the community about special activites and actions that we do for each separate region. So it’s very well attuned, and we are trying to hear our community well. One very great example of this is our recent work with the eSports guys who are playing World of Tanks. We had a challenge of World of Tanks coming into eSports because it wasn’t actually manufactured as an eSports game, and it became this naturally because of demand from the community. So it lacked many features like proper observer mode or freecam or server replacement which is needed and essential for an eSport title. So we developed it after its release. And the gameplay of eSports lacked dynamics, so it was many times said by our community that the games are more boring than for example League of Legends, and they’re less dymanic, and teams are camping, because the stakes are very high and the gameplay was based this way, that players should be more careful to win.

So we discussed this with our players who participated in grand finals, to find out what they wanted and they really wanted to be more aggressive, they really wanted to be more in action, to show their fans and their community how cool they are – not only sitting and camping, which could have an aggressive response by the community. They wanted to be seen as heroes. So we discussed with the players how could we achieve this, what feedback could they provide, what to change in the game and we decided to sign contracts with top teams, give them some salary, and they were trying out all the test modes of all our new rules, all the test maps and test formats. And in November on November 5th, our new version 9.4 is coming out and it will produce the new game mode for eSports, which is collaborated with our players and based on their feedback. So it eliminates the possibility of draws and it encourages active actions. We tested it and it’s very spectacular. So it’s a very proud thing for us and a big achievement – the first time when we directly worked with players to develop the game. We also listen to the forums for feedback, but these players were in our office working directly with developers and showing us directly what we should do.

Save Game: Give us five words that best describe World of Warships.

Save Game would like to thank both Max and Sergey for their time answering our questions and for showing us through World of Warships. We’ll have more coverage of Wargaming’s latest MMO over the next few days. For more information on the title, check out the official website.