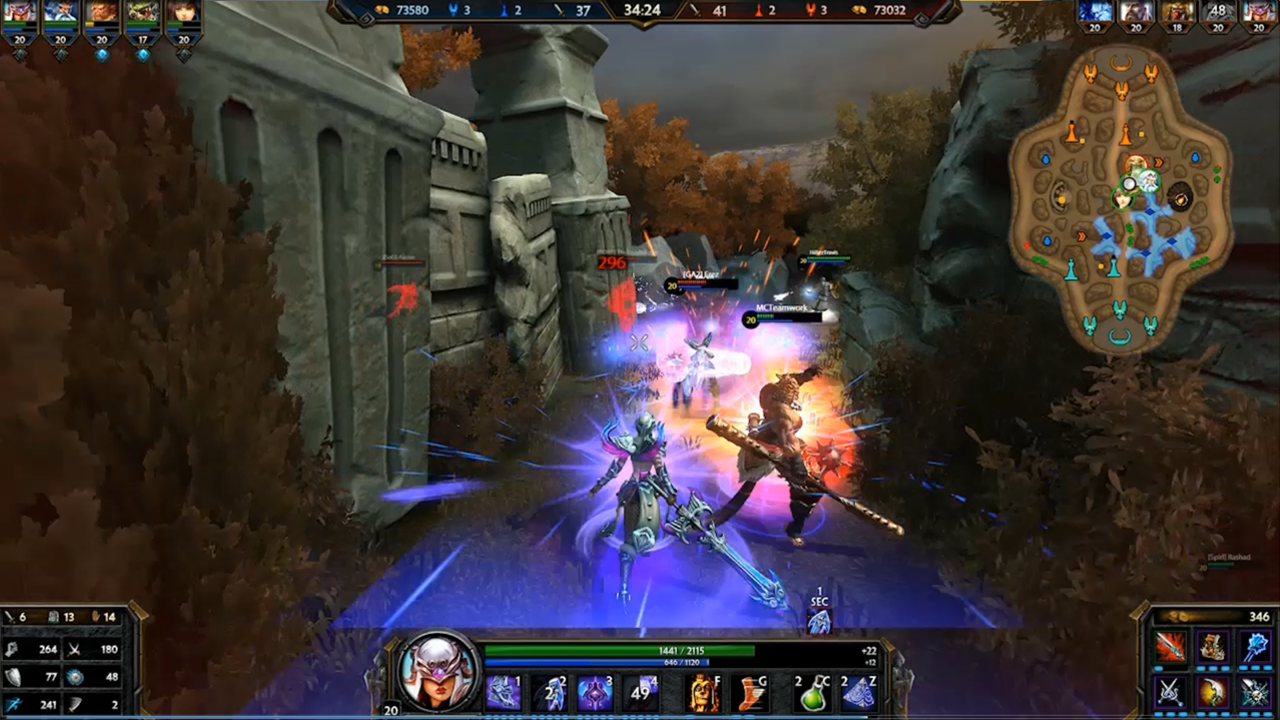 At PAX Australia, Save Game was lucky enough to catch up with Todd Harris, one of the founders and the Chief Operating Officer of Hi Rez Studios, who have recently released their third online game, Smite. We chatted about a variety of topics, from gods to playstyles to whether the game is newbie friendly. The full transcript is below.

Save Game: In Smite, players can choose to play as gods from seven different pantheons. What made you choose to focus on these pantheons, and is there one particular pantheon that you favour?

Todd Harris: What we did was, when we decided we wanted to do a game about gods versus gods and basically mythology and world literature, we looked at the families of gods that we were familiar with, and we tried to identify ones that number one, had a very diverse cast of characters, ones that were both polytheistic and very varied. And number two, where in the original source material, in the literature and art, the deities are actually shown fighting amongst one another.

So that was kind of how we decided which families would be eligible for inclusion, and then we just did a concept art phase where we threw a lot of ideas up against the wall, and we ended up with these seven because we felt they fit those criteria, and also they just had characters that would be very interesting both visually and as far as their actual abilities, the gameplay mechanic.

The favourite one is tough. The most popular one, I would say, the most well-known, traditionally, has been Greek, where you have gods like Zeus and Hades. These days, actually, Norse is I would say the most popular with our player base, mainly because of the Avenger movies. Thor, Odin and Loki are all well-known characters and folks like Ymir the frost giant and Fenrir the wolf are pretty cool in that they’re non-humanoid. So that’s the most popular with our player base, but personally, the development team has learned the most investigating the Mayan pantheon, which is probably the one we were the least familiar with as a western developer and they have some really interesting characters also.

Save Game: You’ve got quite a lot of characters you can choose to start out with. Are you looking to add more in the future?

Todd Harris: We are. So there’s 59 currently and we’ve been adding them at a very fast rate. We plan on adding one about once a month, for the forseeable future, certainly until we get to around the 100 level, I would say, we plan to keep going at about once a month.

Save Game: Do you find that people try out a few different characters but they then end up finding either one that suits their play style or they like the types of moves the character has, and then they stick with that character?

Todd Harris: They do, yeah. In addition to categorising them by the pantheon, the family of where their lore came from, we categorise them by class and so certainly players of other games, specifically MMORPG’s or other MOBA’s tend to have a class that reflects the play style that they like. Do they like what we call Guardians which would be tanks – lots of hit points, initiating battle and up in front, with crowd control abilities like being able to stun or slow others. Do they like what we call an assassin like Loki – someone who comes out of the shadows, does some quick damage, usually gets a kill and then vanishes. Or a mage – someone who’s doing magical damage who’s very squishy and unprotected but can do high burst damage. Hunters – we have our archers like Artemis would be a hunter – someone who’s doing physical damage who can scale very very high and be very powerful but are also not very well protected. So we definitely do see that most gamers will pick first one of those playstyles that’s most appealing to them and then they’ll often have maybe between one and three first choice characters that if they want to play their best or be their most comfortable they’ll go to those characters. 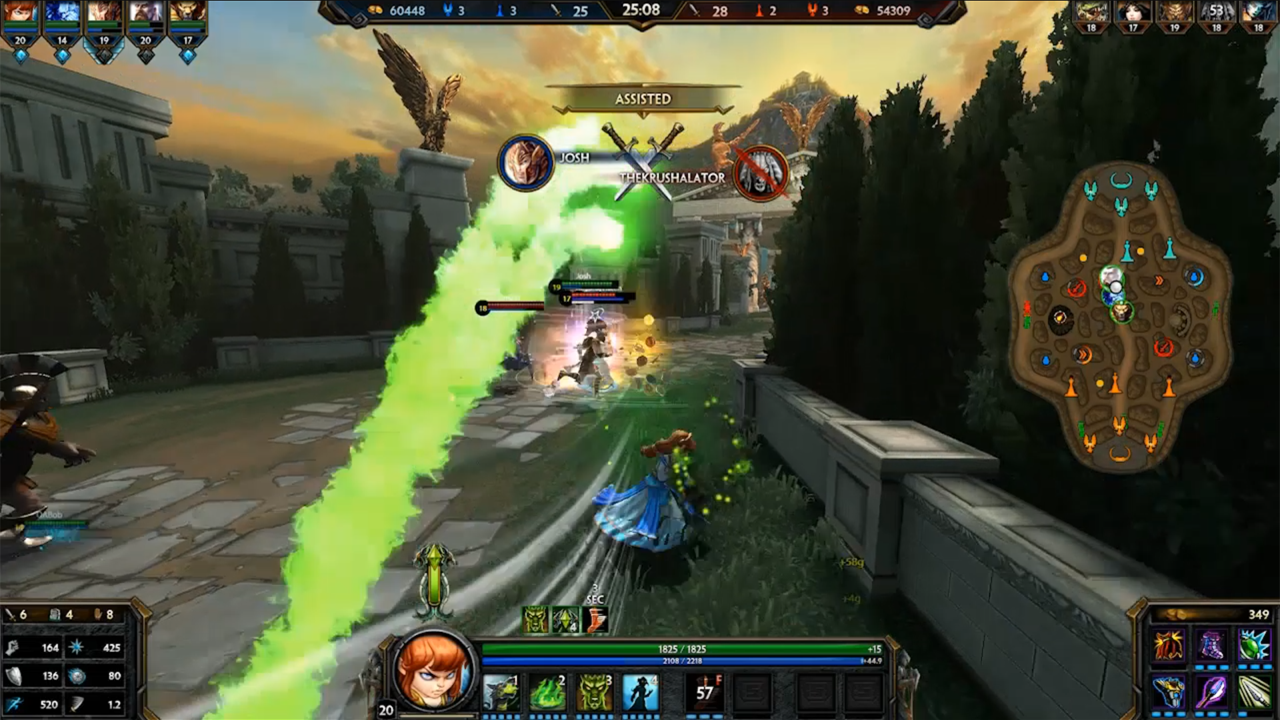 Save Game: Smite seems to be a very tactical game, but it also has that sense of community – working together. Do you find that Smite has a very strong community focus?

Todd Harris: It really does. It is tactical and competitive and we offer a game mode called Conquest that’s a very familiar map layout to other players but we offer more casual game modes as well, such as Arena and it’s very casual. First of all, game match – length – itself is going to be just about 20 minutes pretty reliably, and there’s much less rage, honestly, in that form, because winning and losing just doesn’t matter that much and you can play it wrong in other people’s opinion in less ways.

The other thing we do for new players is we give them the ability to auto-purchase the items for themselves so they don’t even have to worry about that, they just come in. So some of those gameplay mechanics we think are important to keep the community positive and then of course, one of the advantages we have, we think, as an independent developer, is we can talk directly to the community and really encourage those community things. So specific things we do for instance are – for people that are creating youtube content around the game – we can feature those people within the game themselves. So if you want to learn to be a better player, you can see some youtube content about Smite right within the Smite game client. Similarly for Twitch, we livestream ourselve as a developer and for other people who are streaming Smite and developing personalities or educating players, mentoring players, again you can discover those Smite streams right within the game client itself. So those are some of the things that we do to support and grow the community.

Save Game: Touching on the fact that Smite is a good game to play as a new player – one of the things I find, if I’m not too familiar with a game, one of the worries I have is stepping in and getting absolutely smashed by people who play the game competitively all the time. So, in Smite, there’s the ability for new people to pick up the game and run with it?

Todd Harris: Yeah, there really is. We provide a number of steps, so if you were to download it tonight, and the game is free, your first step when you go and play a new game mode like Arena is to watch a gameplay video that’ll show you the key mechanics. Then you can play a tutorial for most of the game modes that steps you through it. Then you can practice against bots, or you can co-op practice, so if you have a friend and you want to join together, you can play with real people only on one side and bots against the other. And you can replay those things with multiple gods until you feel comfortable that you know the mechanics and that you’re comfortable with that character. And then, and only then, when you really feel ready to opt in to that player versus player combat, then you can join a match that is multiplayer against other people online. And even then we try to put in additional systems that will help you as a new player.

We have a quick voice system called VGS – so you just hit the letter V and you get a tree command of different voices, and you quickly learn that players use that to communicate both tactical commands and also just humorous things. So you’ll learn the type of things you’re supposed to talk about because other players will be speaking through that quick key command. So they’re gonna say ‘Hey I’m low health, I’m gonna go back to base’ or ‘I’m out of mana’ or whatever the commands are. So that’s a nice way where you can learn those sort of things and then of course you can also spam jokes and taunts and dance moves and everything else that people like to do in MMO type games that keep things fun.

Save Game: Players control the gods from a third person perspective, which is quite unique for this genre of game. What made you choose to go with this perspective?

Todd Harris: It’s really where we came from as a developer. Our first game was a third-person shooter MMO called Global Agenda and you directly controlled your character. It was pretty different at the time when MMO’s were tab targeted and we made it more like a shooter. Our next game as a developer was Tribes: Ascend which was a very fast paced first person shooter. So, as a developer, a lot of what we know and felt comfortable doing was these third person shooter mechanics where the camera’s right behind your character, and you’re directly controlling it versus, say, a real time strategy game.

Smite actually began life as a third person shooter, that then has now a game mode that has MOBA elements. So you directly control your character, all of your shots are aimed – if you’re shooting arrows at me as Artemis I can actually move out of the way and dodge them, and very importantly, if you and I are in lane together, someone might be sneaking up behind us – we don’t see that, because you don’t have the birds eye isometric view. You actually have to turn your camera around to see it, or rely on your team. So all those are very different mechanics that feel more like a third person shooter, or more like a little bit of MMO PvP combat. Again, it’s where we came from as a developer that the game starts with that approach.

Save Game: Five words that you would use to describe Smite

Todd Harris: Battleground of the gods…free.

Save Game: The game has been out for a little while now. For people who want to know more – where can they go?

Todd Harris: They need to go to smitegame.com. The game is free, you can download it, and the Australian servers are live so players should enjoy really good ping and we are excited to support the community that way.

Save Game would like to thank Todd for his time.