During the recent PAX Australia, I was lucky enough to have the chance to interview via a translator Atsushi Miyauchi, the director on Dynasty Warriors 8. We chatted successful franchises, favourite weapons and characters, and challenges for the future, amongst other topics. Below is the full transcript.

Dynasty Warriors is Koei’s most successful franchise. What do you think has made it so popular?

In the series, the main concept behind the action is one versus many, so with simple controls and being able to defeat so many tens of thousands of officers at once and to have that really exhilarating feeling of being able to defeat so many officers at once is something that we’ve definitely stuck to for every game of the series. Because we stay true to the key elements of the game, I think that’s what keeps users coming back for more. In addition, we definitely listen to what the user feedback is. So whenever they have any feedback about the previous version, we will do everything that we can to improve on that for the next version.

Between 7 and 8, the new elements that we have added to the new title – the first one is the additional storyline – for each of the main storylines for each kingdom we have an alternate storyline – what if certain officers had actually survived this battle, how would have everything fitted, how would it have ended up. So we have alternate endings for each of the four main storylines. This is a completely original story that isn’t in the original Romance of the Three Kingdoms novels so it’s a completely new, original story by us.

The second thing is that we have 77 characters – 10 new characters from the previous version – as well as the weapons system. We actually had 77 different weapons, and any character can equip any of those 77 weapons – they aren’t limited to a certain weapons set, they can use any weapon that they want.

My favourite character is Zhau Yun and my favourite weapon also happens to be Zhau Yun’s weapon – the Dragon Spear – because the way that he moves with it, he moves very smoothly but it’s got a lot of sharp, powerful actions – it moves very well together.

The weapons used by characters are both impressive and enjoyable to use. How much research goes into creating new weapons for characters?

With a lot of the weapons, we’ll research into the actual Chinese/Japanese history for similar elements in order to figure out what and how they were used and what they would look like. But at the same time when you get to 77 weapons, we’ve pretty much exhausted everything that there is in history, so we do remake some of the weapons as well and focus on new things. For example the character Huang Gai – he uses a big weapon that kind of looks like a big boat – that definitely did not exist in history! So we do come up with some original weapons as well. 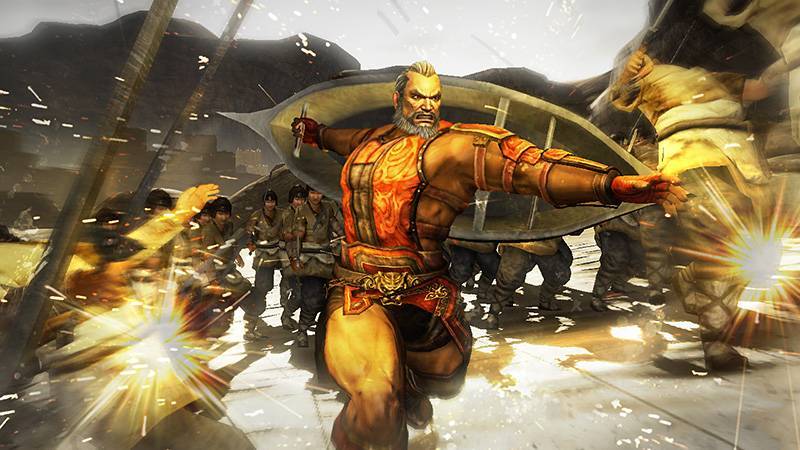 Dynasty Warriors 8 offers players more freedom than they have had in previous games. Was this freedom an important part of the game design?

Having the freedom was a conscious decision. In Dynasty Warriors 7, we made the game more dramatic – in order to have players experience this more dramatic storyline we had to limit the way that the storyline flowed, so players had to follow a certain route. But because of that, a lot of feedback that we received from users was that it was too restrictive and that they wanted to play certain stages in different ways. Based on that feedback, that’s really then where the new storyline came into play, so that depending on whether you attack from the east or if you attack from the west, depending on which direction it is, the outcome or things that happen in that stage will change. So yes, it was definitely a conscious decision.

Dynasty Warriors 8 also offers co-op play as part of the story mode. What prompted the inclusion of this?

The co-op play is a continuation with my previous answer – with Dynasty Warriors 7 because we did limit the storyline and you could really only select one character and play that – adding the co-op play within the story mode was a conscious reaction to that for the users, so that not only if you played by yourself will you have different playthroughs but if you played with someone else, if you played co-op in the stage, the way the stage outcome will also change as well.

Because the game has so much replayability, it means I can have a different gameplay experience to someone else. Is it rewarding to be able to have a conversation with people who can have a totally different game, depending on the way they play it?

The series has been around since 1997 – a very long time in terms of games. How do you keep making things fresh for players who might have been here since 1997?

This is a very good and very difficult question to answer. The way that I can answer this is not necessarily how we keep it new and fresh, but we identify what we absolutely can’t change in the game, with each iteration of the game. So, it’s really the two key concepts of the one versus many, defeating as many at once, and also the Romance of the Three Kingdoms source story. Those two will always remain constant in the game, which means that everything else we’re left free to play around with and to change. So by knowing what we can’t change, that allows us a lot of freedom unto what we can change. It’s hard to say what’s going to be next because we don’t know what might be next, but we’re definitely hoping to try new things.

The new Dynasty game features new battle mechanics – do you think the game is more for those familiar with the series, or can someone who’s totally new pick up the game and have a good time with it?

For Dynasty Warriors 8, the existing users are definitely the fan base that we like to cater to and want them coming back to the game, but also it doesn’t mean that we’re alienating new people, we definitely want new users coming on board as well. The new actions are there for the existing users, but for new users we have a tutorial mode as well and we also have some button mapping where one push of a button can do multiple attacks so players that aren’t familiar with all the controls will have an easier way – just push one button and the most fitting action will take place. In terms of any new users, Dynasty Warriors 8 is the best game to start off with.

I would like to thank Miyauchi-san for taking the time to answer my questions, and to Mindscape for providing me with the opportunity to interview Miyauchi-san during PAX Aus.

Dynasty Warriors 8 is out now for PS3 and Xbox360, both in physical and digital format. For more information on the game, check out its official website.