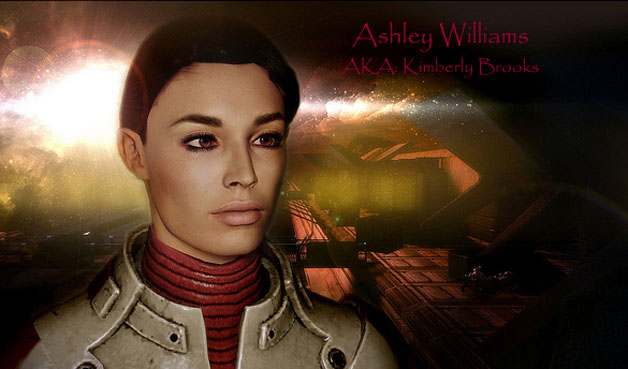 To help keep you guys slightly sated until Mass Effect 3 arrives in just 6 days, we’ve done interviews with Raphael Sbarge, and Courtenay Taylor.  Today we have some questions answered by Kimberly Brooks, who voices the character of Ashley in the Mass Effect Series.

What’s the Shepard/Ashley relationship like, now that we’re at Mass Effect 3?

They have some trust issues. Depending on how you play the game, that answer varies. I think Ashley and Shepard have a very strong bond, and there’s still a lot to be uncovered with these two.

How do you think Ashley has changed and grown over the course of the three games?

I think she’s grown a lot as a soldier. She’s just seen so much; she’s lost so many people she’s cared about, which changes you. But the thing that hasn’t changed is her allegiance to the cause.

Ashley got a bit of an update to her look for the third game.  Her hair is down (something some fans were requesting) and she has some new, shiny armor. What’s your opinion on her new look?

I think she’s not afraid to be more than a soldier, and I like it. And I embrace it. And, simply stated: She looks hot. 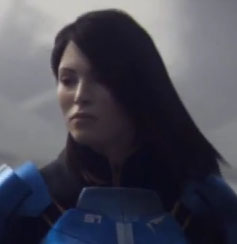 Ashley is one of the characters in the Mass Effect universe who has the most polarisation regarding fan like and dislike. Is it difficult to see criticism of her character, or does it feel good to know people have such strong opinions about her either way?

I think it’s a testament to how good the game is, and how invested people are in these characters. So, that’s a good thing. But I think good stories and good drama require conflict. Ashley has her belief system, which is unwavering, and I think if people focused on that more, they might see there is more to Ashley.

Have you started playing Mass Effect yet? If so, or when you do, do you think you’ll play a male or female Shepard?

No; I do not have an advance copy. I would play as female, and I would want to have a whole thing with Kaidan. I would love that very much.

We’ve heard a lot about some of the new advancements that are letting the voice actors actually play a scene with the other actors’ voices. Does this make things easier or less awkward when it comes to the more emotional or intimate scenes?

Those are still awkward, because you’re acting by yourself. I don’t want to give anything away, but I did have a lot more intimate scenes this time around. It makes it easier, obviously, because of just proximity and energy level, and just matching that. But you’re pretty much just in a room, making out with yourself.

Is there a line you’ve said as Ashley in one of the games that sticks out as your favorite?

Ashley seems to be a woman that sticks to her convictions, even going as far as to dismiss Commander Shepard in Mass Effect 2 because of them. Do you think Ashley fits the bill of strong female characters the video game industry can be proud of?

Without spoiling anything about Mass Effect 3, let’s just say that Ashley gets through the game and lives happily ever after. Where do you see her in 10 years?

Still in the military, hopefully with Shepard. That’s my answer.

Are you guys just dying for this game yet?  Don’t forget to pick up Mass Effect 3 when it releases on March 6th.