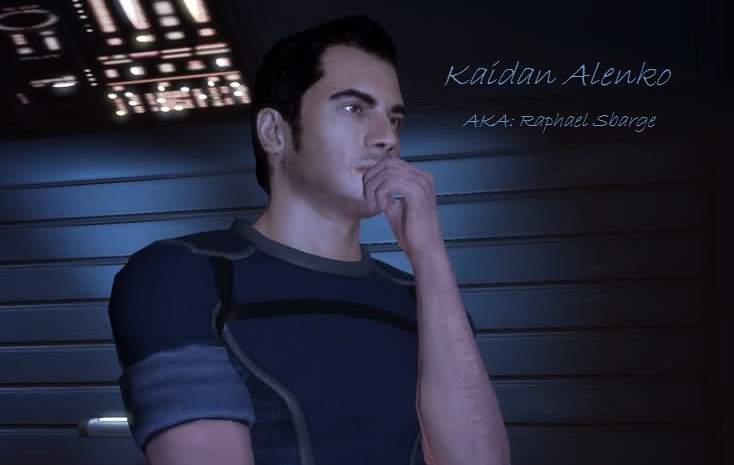 It’s Valentine’s Day, which means romance (it also means the Mass Effect 3 demo is out today).  So we here at Save Game thought it would be a nice treat to focus on the more lovey-dovey side of things.  Luckily Raphael Sbarge, who plays Kaidan Alenko in the Mass Effect series was nice enough to indulge us and answer a few of our questions about Kaidan and Commander Shepard.

1. To get into the character of Kaidan, did you work with what the writers gave you, or did you try to think of some additional details about him, besides what’s already in the game? If so, what are some of the things you thought of?

What they did was they provided us with artwork, drawings of what the character looked like. That, obviously, affects your imagination and gives you some place to start from. They gave us an outline of a style of the game – they wanted it to be much more like an episode of “24,”or a feature, they said. (Remember, this came out when “24” was at its peak. They didn’t want anything cartoony, no affectation – “very real,” was kind of large, capital letters and underlined as sort of the objective.

That said, then, working from there, they gave us some sample lines for who he was, and that really gave us a place to start from.  Remember, actors who work in voiceover and/or also in games are used to taking crumbs, and trying to construct something out of them. That’s what we do. There’s not always a lot to go on.

2.  You’ve gotten a lot of attention from the fans since you started tweeting and posting your audio blogs especially, which is a real testimony to the quality of your work. Were you surprised to find that Kaidan has such a vocal fan base?

Was I surprised?  No, I was overwhelmed. Absolutely knocked out by what I discovered, which is, and I’ve said this to friends privately, but the response is the closest that I’ll ever feel to what it feels like to be a Beatle – and I’m not talking bug. The fanbase is vocal, passionate, excited, opinionated and worldwide. We had response from everywhere, and it just hasn’t stopped.  And the response was so strong that it kind of led me to want to do more of it, meaning, clearly there’s an audience that was looking for more.

3.  You’ve been involved in voice acting for Bioware games since Star Wars: Knights of the Old Republic. Obviously, there have been a lot of technological advances since then that have changed the way games look and even the way in which gamers play them. Has the actual voiceover recording process changed a lot since you first started out working with Bioware?

They’ve done two things. One is, they have created this proprietary software, whereby which they can play other lines in the sequence that have been recorded, to lead you in. Normally when you’re recording, you’re just alone in a room, and you’re doing random lines. But if there are other people in the scene, like the Shepard character or any other characters that you might be interacting with, they can play their lines, and you can hear them in your headset, and then you can respond to them. And it gives you something to interact with, which is great. I’m pretty sure they call this Veda.

And the other thing that’s changed is, when we first started working, we would actually be handed paper. The old dead-tree method of actually getting you information, and you would be handed a huge stack, and then you would just sort of work your way through the stack and you would know that you were close to done as the stack got smaller. The way it is now is sort of a giant screen that sits on a music stand – think of it like a very large iPad – and they change the information on that screen, and they highlight it with yellow for whatever you’re saying, and the word RECORD comes up on the screen –it’s very tech. It’s very James Bond.

4.  How do you see the Shepard/Kaidan dynamic? What is it that makes them work or not work as a couple in your personal opinion?

Well, of course, it always depends on how you decide to play it, and it seems like there’s clearly a lot of different choices there. But if two people meet in the world and have a feeling like they’ve known each other forever, or they have a connection that seems to be above and beyond what might be just two random people, it goes beyond anything carnal, and it goes beyond their roles as shipmates and partners on a journey to save the world. There’s sort of a soul mate kind of quotient. 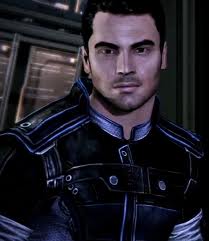 5.  How do you feel Kaidan has changed as a character by the time Mass Effect 2 and Mass Effect 3 happen? Can we expect to meet a Kaidan in Mass Effect 3 who’s quite different from the Lieutenant who joined our squad in the first game?

I think Kaidan in Mass Effect 1 had some humor, and I believe that there’s some more of that in Mass Effect 3. But, mostly, the difference between Mass Effect 2 and Mass Effect 3 is, you’ll hear a lot more of him. In addition to that, the play-through options with the FemShep character are pretty dynamic.

6.  Kaidan seems like a very complex guy, very controlled in his interactions with Shepard. How challenging is it that to portray?

I guess one can say it is challenging: You have to, essentially, be covering your feelings. He often doesn’t say what he’s feeling, but we sense underneath the surface what’s really there. There’s not always a place for them to express the feelings they have, given their military rank.

7.  What do you think are some of Kaidan’s best traits? On the other hand, what are some not-as-great traits or flaws with him that you can think of?

He can be impetuous. He can have a trigger temper. In Mass Effect 1, he screams a lot – or so I’m told. He may be loyal to a fault, at times.

8.  Do you have a favourite line or a favourite scene you recorded for the games? If so, what was it?

In general, all of the scenes that involve some intimacy in them. It’s fun and exciting, from an actor’s point of view, to be able to have to have feelings and have to cover some of them, and struggle to find away to express and/or not express them.

9.  We understand that you can’t spoil the game for us, but what sort of ending would you like to imagine Kaidan and Shepard have after the conclusion of Mass Effect 3?

I guess that they get to go on and continue to save the universe.

Many thanks to Mr. Sbarge for his time. You can follow Raphael on Twitter at https://twitter.com/RaphaelSbarge. Keep watching Save Game for upcoming interviews with other Mass Effect love interests!