Supanova 2012 – Our interview with Tricia Helfer 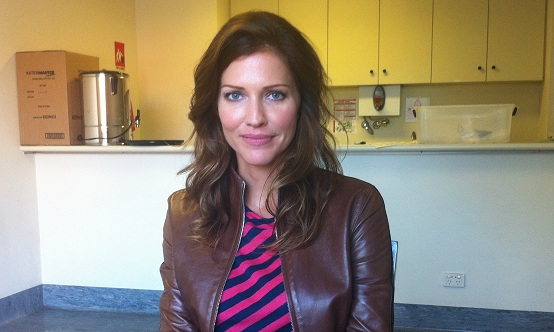 Recently at Supanova, our resident Sydneysider staffmember Rebecca had the pleasure of interviewing Tricia Helfer, an accomplished actress and best known to us as the voice of EDI in Mass Effect 2 and 3. From the differences between on-screen acting and voice acting, to discussions of EDI and her relationship with Joker, Tricia covers many interesting questions and reveals some surprising asides. Read on for the full transcript and audio of the interview.

The audio interview can be found here. Below is the full transcript.

First of all, how are you enjoying Supanova?

Have you been to many conventions in the past?

I haven’t been to any in Australia but I’ve been to a few. I do one or two a year.

You’ve had a really diverse career with modelling, charity work, acting and voice acting. What aspect of your career are you most proud of so far?

I don’t still model; that a separate career but in terms of acting I think probably what I’m most proud of is that I’m continuing to act. It’s a very tough business and I started relatively late because I modelled for ten years before this so I think a lot of the people that I’m up against for roles have a resume three times as long as mine because they’ve been acting since they were five or twelve or twenty or something and I started acted at twenty eight, twenty nine. So I’m just proud that I’m getting a foot in the door. Just building blocks and I see progress and I’ve said that I’d be happy as long as I was seeing progress. I have a lot more to accomplish. A lot more I want to do but I’ve been really lucky getting roles like Battlestar Galactica and things like that and getting to work with some amazing people.

What else would you want to do?

Oh, tonnes of things. It’s too hard to just say one because there’s tonnes of things I’d want to do. I mean I want to do a big studio action flick. I want to do an amazing, heart-wrenching indie flick. You know, I want an Oscar! I want an Emmy! I want to work with this person and this person and this person. If I had my choice I’d have the career of Cate Blanchet or Charlize Theron. But being realistic I’m just happy as long as I keep building and keep working with good people.

Is voice over acting in video games something you’d like to do more of?

Absolutely. I mean, I really enjoy voice acting and most of the stuff I’ve done so far is my voice. I’m hoping to branch out and get people in that part of industry to know that I can do other voices and do more animation type things and more fun cartoon-y type things as well. I’m not as skilled as a voice actor in doing lots of different accents and things like that but I think it would also be fun to do. Just like an actor playing the roles you can play a bimbo or you can play a siren and the same thing with voice acting I would like to do silly things too.

How do you find the preparation – is it similar for on screen to voice acting? What are the differences?

Not remotely the same. With on screen you have the script. You know the entire project, you know you’ve read the script and you have prepared for it. With voice acting, the biggest frustration with voice acting is ninety-nine per cent of the time you get nothing but your lines and you get them, sometimes the first time you’re actually reading the line is when it’s being recorded. Very rarely do I get my lines the night before and when I do it’s just my lines. It’s not the rest of the stuff. It’s different if it’s maybe like an episodic cartoon or something but for videogames and even for some episodic stuff you just get your lines or you see the person you’re talking to but that’s it so you don’t necessarily know the story line. It’s much harder to prepare. You can’t really prepare. How can you prepare for something you don’t know what the concept is and what’s going on so you really rely on the voice director and the writers and the in the booth. It’s hugely integral that they are there and you can rely on that they can fill you in on what’s happening. With voice over and animation part of the reason for that is you’re voicing a lot of the time before any of the…you know, you’re not talking to the picture. You very, very rarely get to work with another actor too. With Mass Effect, a lot of my lines are with Seth Green but we never recorded together.

Did you meet at all while you were doing any recording?

We only met on a press day. And we faked a picture, like you know, recording but I never actually recorded once with him.

Do you find that more challenging?

Challenging in a different way. It’s not that it’s *more* challenging it just, it has its own challenges.

So with your character in Mass Effect, in the third game, she starts asking questions about humanity. Was it challenging to have to portray her character developing like that?

Yeah, it was interesting and it was fun to see EDI grow in that way. And I guess I sort of likened it to a child in a way; experiencing things and trying to get a grasp on what this means to the rest of them and obviously she’s a robot and having done Mass Effect 2 it was more fun than challenging to bring in a little bit more emotion and a bit more curiosity.

Did she feel more like a fuller character then for you to portray?

Do you have a favourite EDI moment?

I don’t know. There was one exchange, kind of flirty exchange with…I think it was actually with Shepard watching EDI and Joker kind of flirt. I can’t remember exactly what it was but I think it was actually…yeah. I don’t know. EDI has some great moments in Mass Effect 3. A lot of good one liners and she was really fun and also she got to be out in the field so to speak. I really enjoyed playing her in number three.

What was your take on the relationship with Joker?

I don’t know. I think it’s …I just had fun with it. I didn’t really place…you know with video games I find it more….I really just rely on what the voice director and writers are telling me what because again you’re not voicing with something, you’re not voicing with anyone so you just go line by line so I don’t really have an idea of how it on a collective, like on a whole what the relationship is but definitely I saw them as a close relationship, yeah. EDI would do anything for Joker.

At Save Game we created cocktails for each of the squadmates. And there’s one for EDI.

The Unshackled Blast is your drink.

[reads] Oh, wow. I would like to try one of those.

Editor’s note: Save Game would like to thank Tricia Helfer for sitting down to chat with us. I’m pretty sure talking with her made Rebecca’s year.