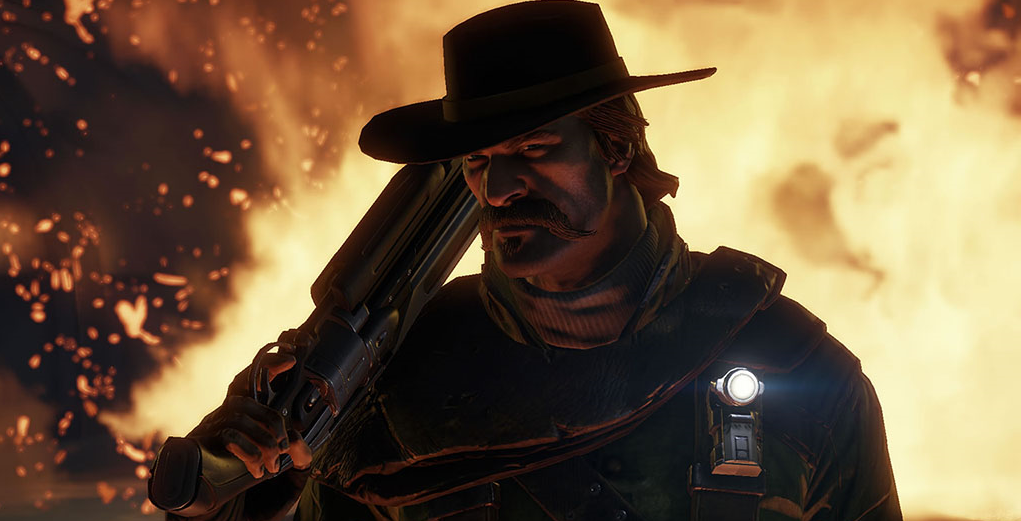 Ahh hunting, the sport of gentlemen like Sir Hammerlock of Borderlands 2. Predator and prey. Man versus beast in an epic struggle for domination. That’s what Evolve, the new online multi-player game in development from Turtle Rock Studios is all about.

The rules are simple; kill or be killed. For those who don’t know, the unique aspect of Evolve is that it is a mulit-player experience of four versus one. The game pits four players as hunters against one player as a monster in a duel to the death and it has just had its first public alpha on PC, Xbox One and PS4. Unfortunately due to the release of the PS4 firmware update the PS4 version was unavailable for a good part of the weekend, however I was able to get some hands on time to see just how the game plays.

Each of the four classes of hunter present a good balance, with no one hunter being able to go it alone and dominate the battlefield. In this game there is no room for the lone wolf (except when you get to play as the monster) and only by working as a team will you be able to successfully defeat the monster. In its early stages the monster can easily be dispatched by the four of you, however if it evolves into its second stage you are in for a fight, with the monster evenly matched to the combined power of the four hunters. When the monster reaches its third and final stage, the monster is very formidable and the power advantage is on the side of the monster, which makes for some hairy moments as you are trying to fight it. It’s this increase in challenge which requires that your teamwork is at its strongest, with each of the hunters utilising their strengths and abilities to fulfil their roles. The four hunters must work together: the Trapper needs to set up the mobile arena to stop the monster from running away, the medic has the job of keeping everyone alive, the hunter fufilling the assault role must inflict as much damage as possible from a distance or up close, while the support can rain fire from the sky, calling in rocket strikes to light up the monster.

Taking control of the monster presents a totally different experience. Thrust into the world by yourself your first order of business is to escape the hunters who are literally about to drop down on you from above. I’ll admit that the first time I played as the monster I was a bit overwhelmed. Taking control of the monster I was trying to come to grips with the movements and controls, knowing all the while the hunters were out there tracking me. This knowledge meant that my adrenaline was pumping and I had a death grip on the controller as I tried to run away, whilst also trying to read the pop-ups of info that explain the monsters controls. I found the absense of a mini-map to be a small detraction from the experience, as without direction I stumbled into walls I could not climb and fenced off areas I could not venture into. In addition, as a monster, you have your own senses in which you can ‘sniff’ out the hunters and other animals nearby but this often involved having to either run while turning the camera to look behind you or coming to a stop to get bearings. More often than not I was on the back-foot and could not take the time to stop and plan out my next move.

During my time with the alpha, I quickly discovered that the key part to playing as the monster is killing and feeding on the wildlife in the game world. This generates extra armour and regenerates health when needed, but the main advantage of feeding is to bring on an evolution of the monster, giving you more health, armour and attacking power. This brings the monster onto a more level playing field with the hunters, however, the challenge here is attempting to kill and eat your prey with hunters on your trail. Unfortunately, whilst I saw people that were able to reach the third stage of the monsters evolution while avoiding the hunters, I had no such luck. 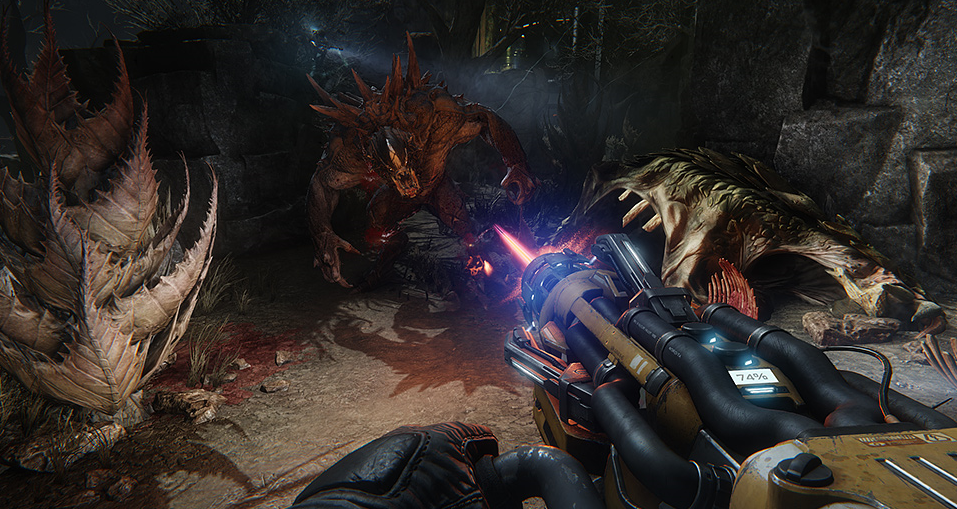 The perpetual darkness and mist which is featured in Evolve’s areas, gives a very gloomy atmosphere in which some of the other animals can be hidden in the darkness and shadows, and whilst the monster receives a benefit from the natural camouflage of its dark textures, the hunters can call on their own allies (such as the Trappers ‘dog’) to track you as the monster, rendering the natural camouflage moot. Another downside to the environment was that there was no way to differentiate between the areas that the monster could climb and those that you couldn’t, leading to some frantic and frustrating moments where I was running into multiple walls trying to find and escape route.

One of the interesting things I did get to experience during the alpha was a player drop-out at the start of a round. While not usually interesting, in a game where every player is needed it was good to see that the game inserted an A.I. controlled character to fill out the squad so that they had the full complement of hunters. Whilst I appreciate the inclusion of the A.I controlled character, during this round it seemed like whenever we encountered the monster, the the A.I. Player was down and out waiting for a revive or respawn. This could be, in part, because you cannot co-ordinate tactically with an A.I., but it could also be the A.I. just cannot compare to having a real player fulfil the role in an online multi-player experience.

Overall, I enjoyed my time with Evolve, and while there were some issues it must be kept in mind that this was only an alpha model and therefore changes will still be made before the release to tweak the game-play. We will just have to wait and see what the full Evolve experience brings us on February 10 next year.