Majestic Nights by Epiphany Games is odd. From the hands-on time I’ve had with the title, I don’t hate it, but don’t particularly like it either. It presents an interesting concept, and tries to add action elements into a point and click template in clever ways, but it fails to successfully tie them all together. In addition to the bugs I’ve encountered (which are to be expected from a beta build), there’s also problems in its design that prevented me from enjoying the chapter I played through as much as I should have. For context, I played through the game’s prologue chapter – Sunset After Dark – which is approximately 45 minutes to an hour long.

The game takes place during the 80’s in an alternate universe where every famous conspiracy theory is true – JFK was killed by a magic bullet, MK Ultra is a real, functional experiment, and so on. You play as John Cardholder (which I’m presuming is a fake name, and a brilliant one at that), who’s a shady figure involved in a number of these conspiracies. In the prologue chapter I played, he’s after the filmmaker who recorded the footage of Kennedy’s assassination because he believes somebody’s coming after him. The plot is a bit hard to follow at points, because the characters all talk as if they know each other and what’s going on without filling in enough blanks for the uninformed player, and it assumes you’re well-versed in conspiracy theories. For those who are, there’s a lot of in-jokes and quips that you’ll get a lot out of, but if you aren’t then a lot of this content will go over your head.

The game plays like a hybrid between point and click adventure games and action games. You’ll walk around environments to talk to people and search for clues as to what’s going on, but you’ll also need to utilise sneaking and shooting to get through the game as well. The stealth and gunplay is simple enough to not scare off adventure game fans, while not simplified to the point where it would play itself and become unnecessary. A fair number of the enemy encounters in the prologue chapter can be handled non-violently through dialogue options and remaining hidden by sneaking through the shadows. The ‘correct’ dialogue options to bring about the outcome you want in a lot of scenarios often isn’t obvious, and requires a fair amount of guess work. The sneaking’s ok, but your only option at times is to stick to the shadows and take cover to hide, with no ability to lure enemies away. Enemies don’t respond to sound, which makes sneaking easier, but it’s a bit jarring when you fire a gun at someone and nobody in the adjacent rooms gives a damn.

The gunplay has some bigger issues. As part of combat, you can take cover or stand still and hold down the right mouse button to aim, which brings up a laser sight that shows where your bullets will go. A couple of shots will down an enemy, and you’ll go down pretty quickly yourself if shot too much. It’s simple and unintrusive, but there’s some quirks with the system that bring it down. Often when you’re taking cover and try to fire, Cardholder will just turn around and aim into the wall instead of around it. This means that in order to attack enemies you’ll have to stand out in the open, which obviously isn’t a good idea since you’re open to fire. It doesn’t always prevent you from firing though, as sometimes bullets will go through the edges of doors/walls and sometimes through objects as well. 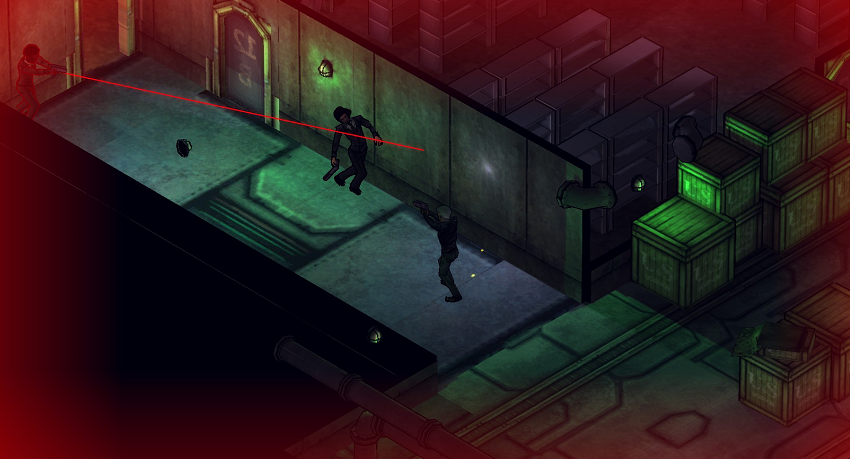 It’s a shame that it doesn’t quite come together, because the point-and-click-cross-action hybrid is a really neat idea. It adds things to do alongside the puzzle and story focus of a point and click game while keeping it simple enough to not frustrate you. The problems I had with the game mostly came down to little quirks like I’ve spoken about above, but there was one particularly annoying segment I grappled with during my playthrough. At one point in the game, you need to question some people in a nightclub, but the bouncer is searching for you, aiming to knock you out. You’ve got to avoid the bouncer in the nightclub by keeping out of sight and standing in crowds, but he can still come after you when you’re talking to someone. So you’ll be trying to focus on the plot, questioning people in the nightclub, and the next minute you’re out cold because the bouncer has found you during your questioning. The game only really makes checkpoint saves when you get to a new area, which means that whenever you die you have to redo conversations and rewatch cutscenes. It’s a pain.

So while my preview of the game’s prologue chapter hasn’t quite sold me on the full game, it’s at least piqued my interest. Hopefully the finished product will have undergone the polish and tweaking it needs, because I’d be quite interested in seeing where the plot goes. Majestic Nights will be releasing late 2014 for PC, Mac, iOS and Android. For more information, check out the game’s official website.