Frozen Hearth is a real-time strategy game with a difference. If you’re a fan of RTS games and don’t know about this title from Sydney based developer Epiphany Games which is currently part of the Steam Greenlight project, consider this a quick crash-course to pique your interest.

The first title in Epiphany Games’ Ámorrá world-setting, Frozen Hearth is the first chapter of a saga that players will help to unfold over a number of games. Taking centre stage in Frozen Hearth are the Danaan – a race of people inspired by the Celts – who find themselves in the unenviable position of having their homeland invaded by supernatural creatures whose bodies are made of ice. Totally not-cool, guys.

Terrible puns aside, not only do the Danaan have to contend with nasty ice creatues, but they also face the onslaught of a tide of ice and snow that follows in the wake of the icebound monsters. If you think you’re dealing with major life problems right now, spare a thought for the poor Danaan. These guys have it bad.

In this struggle for survival, players can either take up the reins alone or via a groundbreaking co-operative campaign to help the Danaan rescue what they can of their people and their culture before everything is consumed by the frozen wastes. The co-operative campaign allows two players to play through the story over 20 maps

Frozen Hearth features environmental effects which impact on gameplay and offers an original world setting where two races take centre stage – the brave Danaan and the bloodthirsty Shangur. The campaign setting can be played either individually or via co-op, and features skill-based unit progression, dozens of spells, abilites and items, and fast-pased RTS action with RPG immersion. The game itself is a traditional, squad-based RTS at its core, however what makes Frozen Hearth unique is its challenging co-op campaign and its inclusion of RPG elements.

We were lucky enough to have Sam Jensen – the game’s Lead Designer – answer a few of our questions. For an indepth look at the game, take a look at the interview below, and see the game in action in the following video.

What was the inspiration behind the mythology of Frozen Hearth? How long has the world of Amorra been floating around in the heads of the developers? How close to your original vision is the Amorra we see in the game?

The inspiration behind the mythology of Frozen Hearth was, interestingly enough, the narratives written for later titles. Basically we have a situation in a later game where the protagonist-race the Danaan find themselves ‘Strangers in a Strange Land’, after the ship carrying what remains of their people beaches itself on a foreign shore… What I wanted to do was tell the ‘Why’ of the Danaan being there.

As for Amorra itself, it grew over several iterations of world-settings. Originally, we started with Mesopotamian, Persian mythologies, which were a little too zany. We then over-corrected and tried out Greek and Atlantis mythologies, which have been done once or twice.

After that, we then sat around and had a brainstorming session, in order to come up with something of our own. Taking some cues from Gaelic myths, and some Nordic myths, and Eastern European myths, as well as ‘dark’ fairy tales, and the artwork of Brian Froud (think ‘The Dark Crystal), I and our concept artist, Adam Paquette (whom you may know from his work on Magic the Gathering) then went away and created something.

As far as ‘how close to the original vision’ – Frozen Hearth forms the very first chapter of a very long story, and as such, I wrote it to be filled with much more familiar locales and races and cultures so as to not be too drastic a foray into our setting. As we release further major titles, we will progressively delve further into the more fantastical elements.

Frozen Hearth is advertised as a cross between an RTS and a role playing game. How difficult was it to blend those different styles of play? Do you think you found the right balance between strategy, resource management, and the more story driven role playing elements?

Frozen Hearth is a highly feature-rich game. We blended bother those genres, as well as a bit of Action-RTS, bringing a whole bunch of features from each. I feel in the end in terms of balance, we got it pretty tight – of course it’s an ongoing work, each successive patch will tweak here and there, just like every other game like ours – the asymmetrical nature of the design actually made that paradoxically more simple, plus our amazing Hydra software made is crazy easy for me to balance the game as we went.

The hardest bit, for me at least, was getting the narrative, typically role-playing elements right. Those goalposts kept moving right throughout development, and if there was one thing I’d do differently with dev, it would be the way in which we injected the narratives and the role-playing aspects of the game into the actual game. For example, telling the epic tale of woe of a race of people fighting for survival in the face of an extinction-level threat in essentially a series of tweets (each text-box was about 160 characters) was not the fun-filled adventure one might think. Then, having to re-re-re-write it when you have to think about localising into, say, german, with its crazy extra-long words, and trying to make THAT fit… yeah. 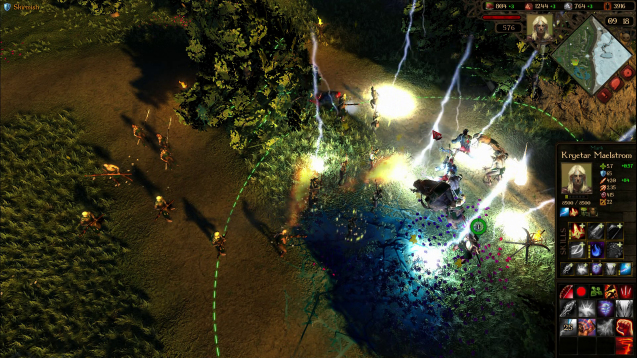 Can you give us a little more detail on the game’s co-op campaign? Is the difficulty increased for two players? Are there any additional missions or story elements? Can your partner drop in and out of a game?

The single-player campaign was originally intended to be a cut-down version of the Co-Op, with a few missions taken out. However, as our AI got better it actually would have required more work to do this for less content, so we kept the campaigns essentially the same. The Co-Op, being the ‘main’ intended version is more difficult, with greater numbers of generally more powerful enemies to make up for the advantage 2 players should generally have over an AI. Much of the story, as a result, is the same with a few added bits and pieces here and there.

What I intend to do with further expansions is really work with this a lot more, and make that 2-player aspect be even possibly a little more antagonistic, here and there, between the players – like the very first mission, which starts off your campaign with your *ally* in direct competition versus one another, trying to take each other out – this is just something that I really liked about the campaign narrative, that notion of yeah, we’re working together, but that doesn’t mean we’re friends. It’s a dynamic I’d love to explore some more, in the future.

Some of the missions are designed around a two-player co-op mode. Will this make the missions too difficult for players who want to experience the game exclusively as a single player experience?

As I said, the single player and Co-Op have different difficulties – with smaller numbers of typically less powerful enemies in any given level. We also give the single player campaign access to a powerful sidekick, not-quite-hero, who is a fairly powerful ally with some healing and strong combat abilities. 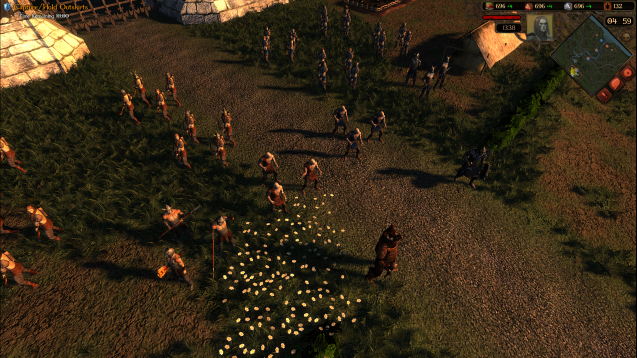 You’ve described Frozen Hearth as a first chapter in an ongoing saga of games. Where do you see this saga going in the future? Will subsequent games branch off into new directions and genres?

So, beyond further expansions to Frozen Hearth, we intend to create games that expand upon the story of the Danaan as they traverse the world, and introduce the cultures and lands they encounter. We intend to push off into creating games of all genres – Action-RPGs intended primarily for consoles, turn-based flying combat games for mobile and tablets, and of course an MMO. Basically I want to take as many directions as possible, The world setting, like any – I guess, is flexible enough to support any sort of game idea. We even have some out-of-setting game ideas that are going to be AWESOME.

We want Epiphany to push as many boundaries as we can. Being such a technically-strong studio helps us support that ideal.

I believe that players can learn a lot about a developer’s culture by playing their games.  What would playing Frozen Hearth teach me about Epiphany Games?

More than anything, I’d think it would teach you that Epiphany Games aims big, and that as we get bigger and stronger ourselves, you should expect some amazing things from us!

The RTS genre is known for it’s hardcore fans. How has the community reacted to Frozen Hearth since its release? Are you satisfied with the reaction thus far?

The response from players has been pretty overwhelmingly positive, with people ratings us really well on desura and other places, engaging with us on our forums and doing write-ups of tribes and races and really getting into the narrative and setting. People have really loved the Co-Op and are really looking forward to us releasing some mod tools, which we intend to get done with the first expansion. So yeah, I am definitely satisfied with the response from players, and look forward to giving them even more awesome stuff to play with in the near future – like I’ve said, we’ve got big plans, and I can’t wait to get them done and out into the market.

Forgive the cliche, but if a gamer could only buy one RTS all year, why should they pick Frozen Hearth?

Hmm, well thats honestly a very tough one to answer – I mean other RTS, like StarCraft or Command and Conquer have budgets that we had literally 1% of for ours… So, I’d say choose Frozen Hearth because it’s just offers that much more in terms of content and options, especially for its price-point. Value for Money!

We’d like to extend our thanks to Sam for taking the time to answer our questions, and to the whole of Ephiphany Games for allowing us the opportunity to learn more about Frozen Hearth and their current projects. If you’d like to support Frozen Hearth, please check out their Steam Greenlight page and send a vote their way to help Frozen Hearth arrive on Steam.

To find out more about Ephiphany Games, or to buy a copy of Frozen Hearth, have a look at their official website. We love seeing people as passionate about their work as Ephiphany Games are, and as Sam mentioned, supporting indie devs is always a good thing!