In Yaiba: Ninja Gaiden Z, players control Yaiba Kamikaze, the ninja antagonist who was previously “killed” by series protagonist Ryu Hayabusa. Understandably, Yaiba is rather upset at Ryu for cutting his promising Ninja life short, and as a result he sets out on a vengeance inspired quest to kill Ryu. Luckily for Yaiba, he isn’t just relying on snapping his decomposing bones at Ryu to cause him harm – Yaiba has been resurrected as a cyborg by a mysterious shadowy organisation, and has at his disposal cyborg ninja powers to defeat his foes. And foes aplenty there are, since Yaiba must defeat a zombie plague to access the power he needs to take his revenge on Ryu. So we have ninja’s, cyborgs and zombies all wrapped up in a tale of vengeance – sounds rather spectacular, right?

Spectacular is a good word to describe the stylized visuals on display in Yaiba. If you’ve grown tired of the bland brown colour palette’s favoured by so many action games these days, Yaiba will be an absolute breath of fresh air for you. The visuals are vibrant and colourful and they compliment the stylized violence well. Thanks to the bold colours, backgrounds come alive around you as you visit cyborg ninja death on the hapless zombies before you. The stylizing of the game itself is akin to the glossy pages of a comic book – with bold, strong colours featured throughout and a liberal does of blood splashed about from your defeated foes. 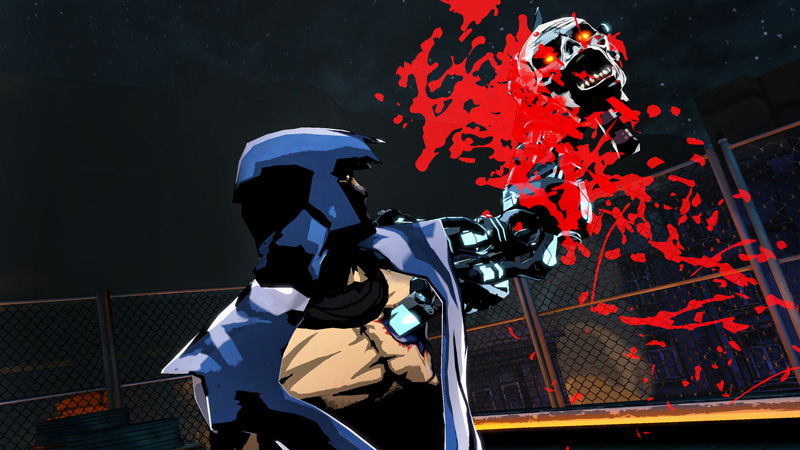 In fact, liberal dose is underplaying the amount of blood you’ll shed from your enemies – the blood flows thick and fast as Yaiba slices and dices his way through any undead in his path. Here, the stylized violence is similar to the cell shaded violence seen in games like Borderlands, however the backgrops have a vibrancy and boldness all their own, without comparison to other games. They create an enjoyable stage to play in, and the gameplay is equally enjoyable.

Having not played any Ninja Gaiden games prior to my hands on with Yaiba, I cannot speak to the comparison between them. However, I can say I found the combat in Yaiba extremely fun, and the mix of combat with the light platforming element created a nice mix of frenetic action and relaxed area traversal. Dealing cyborg ninja death upon your enemies is pleasantly satisfying, and the range of moves Yaiba has access to means you don’t have that sense of button mashing that many games in this genre suffer from. Whilst there were a few teething problems with the camera, on the whole the game did a good job of keeping the camera centred on Yaiba, and the unique finishing moves you are able to perform on your foes are certainly a highlight of the combat areas. After performing one of these finishers, you’ll be itching to perform another, grinning to yourself as you deal out stylized brutality. Trust me – they are incredibly addictive. 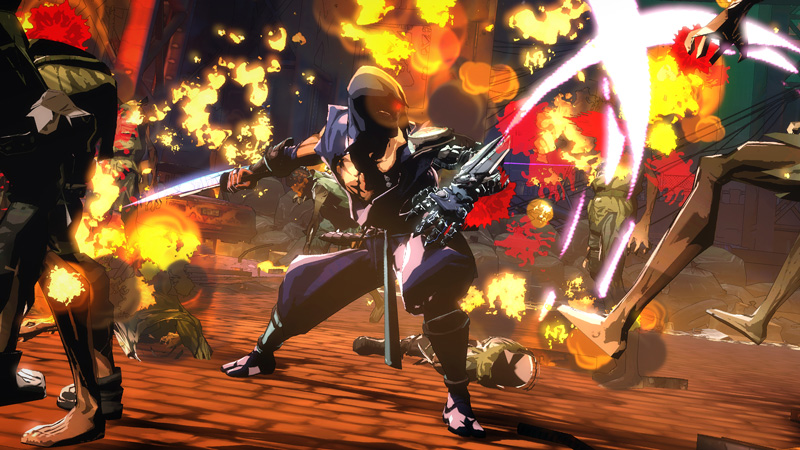 Plot wise, the storyline appears predictably light – kill zombies in your way to get to your goal of killing Ryu was the extent of what I could pick up. However, the demo area I played did feature some tongue-in-check, amusing moments which gave the game a welcome lighthearted edge when peppered in between the moment of ninja cyborg violence. These lighthearted moments were sometimes eye-rollingly groanworthy, but here they surprisingly worked, adding to the enjoyment of the experience rather than detracting from it.

On the whole, Yaiba: Ninja Gaiden Z is shaping up to be an enjoyable, visually striking, cyborg ninja action slicing romp. The combat system is fun and addictive, with the stylized graphics a welcome change from the uninspired colour palette of other games on the market. If you like your games bold and action focused with snerk-worthy quips and action cutscenes, Yaiba: Ninja Gaiden Z should be on your ‘to watch’ list.

Yaiba: Ninja Gaiden Z releases Q1 2014 for PS3 and Xbox360. For a look at the game in action, check out the E3 gameplay video below. If you’d like more information on the game, take a look at the official website.