Special limited edition versions of big game releases are nothing new.  Packed with all kinds of cool collectibles, we pretty much expect them these days.  But a collector’s edition game without the game?  That’s a new one, and it’s precisely what Bethesda announced earlier today for the upcoming Wolfenstein: The New Order.  Read on for the details.

So here’s the story.  Bethesda announced the special collection over on their official blog, and they’re calling it the Panzerhund Edition.  It comes with an impressive amount of goodies, including a folder of classified war documents, three embroidered patches, a replica dog tag, and 14 postcards from the game’s alternate history bound in a display book.  The centerpiece is undoubtedly the Panzerhund itself; an eight inch, fully articulated and hand painted statue of the beast, with a base.  The collection even comes with a metal case for your copy of Wolfenstein: The New Order. 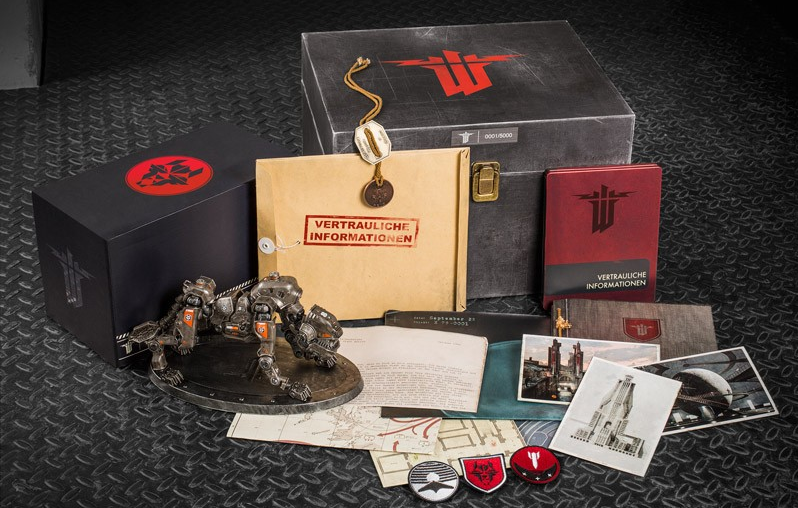 All very impressive.  But what it doesn’t come with is the game itself.  Bethesda apparently thinks that receiving the game inside a big box is such a hassle to buyers that they’re doing us a favor by selling the special edition stuff separately.  At least, that’s their explanation on the pre-order website.  I don’t know about you, but I’ve never let box side dissuade me from purchasing a collector’s edition.  People who pay the extra money for special edition do so because they love the game.  Shipping costs and packaging size probably doesn’t factor much into their decision making.

In any case, the Panzerhund Edition is available for pre-order at the Bethesda store right now for $100.  It’s scheduled to be released on May 20th, along with the game.  Just not together.