This past weekend at PAX East, Bioware held a Mass Effect retrospective panel which featured memories and insights from many of the franchise’s most senior producers and developers.  Luckily for those of us who couldn’t attend, Bioware has posted the entire panel online.  Read on to watch it for yourselves.

The panel was held this past Saturday in the main theater at PAX East in Boston, and featured commentary from Executive Producer and Project Director Casey Hudson, Lead Designer Preston Watamaniuk, Lead Cinematics Director Parrish Ley, Writer John Dombrow, Level Designer Dusty Everman, and Raphael Sbarge, Kaidan Alenko’s voice actor.  Moderated by Geoff Keighley, the panel runs just over an hour, and is a must-watch for any series fan.  Check it out below.

In case you didn’t get a good look at that snazzy infographic that they showed during the panel, I’ve got a nice clear copy of it below.  Prepare to be awed and (perhaps) enraged. 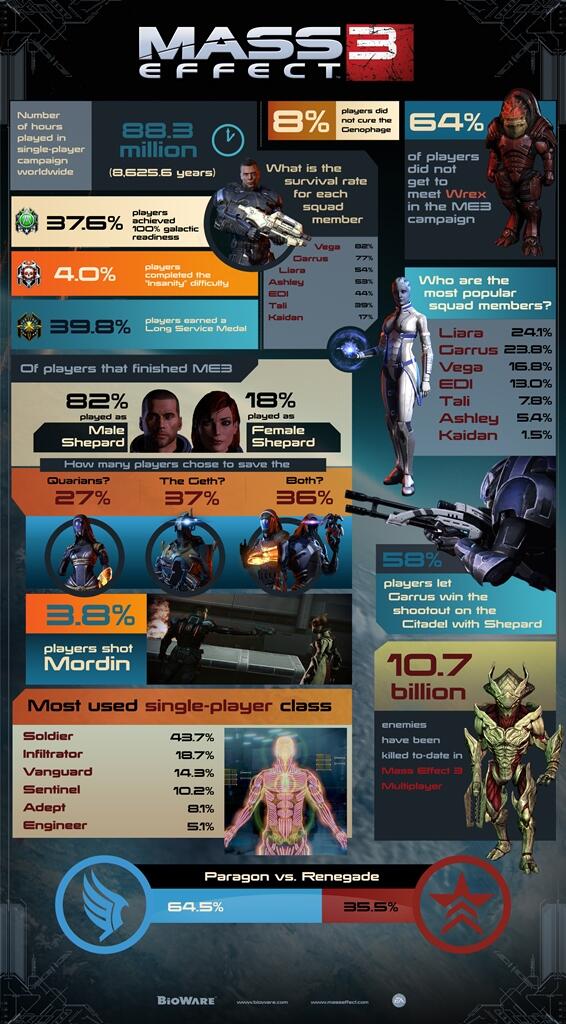 Awww yeah paragons who love Liara represent!  I am shocked, however, that over 80% of Shepards were male.  Where’s the love for Femshep?  I’m even more shocked that nearly two thirds of Mass Effect 3 players never even met Wrex.  WUT?  That means that either A) two thirds of players killed him in the first game, which is highly unlikely, or B) two thirds of players never completed the first game.  What is wrong with you people?  Go back and play the original!  It’s totally the best one, and I know that I’m in the minority here, but it doesn’t matter because I’m totally right.

Bioware has also made available the 6 minute retrospective video that they showed at the very end of the panel.  So if you don’t have time for the entire panel, or if you’d like to watch the video without the awkward cuts back to the panel watching the video, here’s your chance.

So that’s it.  The last Mass Effect story I’ll be posting for awhile, and most likely the last story I’ll ever post about Commander Shepard.  I mean it this time.  It’s over.  Really, truly, totally over.  I’m… Oh, I’m sorry… you’ll… you’ll have to excuse me.  I seem to have gotten something caught  in my eye…