I keep getting this feeling like E3 2013 is gonna be sort of a big deal, you know?  Ubisoft seems to agree, as they’ve announced the lineup for their big E3 press conference, and it reads like the menu of a five star restaurant.  Read on for the details.

Announced earlier today via press release, Ubisoft will be holding their press event on June 10 at 3pm PDT.  Scheduled to make an appearance are Assassin’s Creed IV Black Flag, Rayman Legends, South Park: The Stick of Truth, Tom Clancy’s Splinter Cell Blacklist, and Watch Dogs.  All of these games will also be on display at Ubisoft’s booth, and I have to assume they’ll all be playable in one form or another.  I mean… The Stick of Truth has been in development for, what, twelve years now?  So it’s gotta be playable.  Feels like twelve years, anyway.  In addition to those know titles, Ubisoft also promises to unveil a number of next-generation games, from both known franchises and new brands.  The intriguingly named co-founder and CEO of Ubisoft, Yves Guillemot, has this to say about the event.

“This is a pivotal moment for the video game industry, and E3 is the opportunity for us to share our vision for the future.  We have many incredible games in development, and we’re especially excited to share more on our next-gen titles, which will deliver more connected, immersive and interactive experiences to our fans.”

Thanks, Yves.  Just in case you weren’t excited enough for this pivotal moment for the video game industry, the hilarious, brilliant, and all around awesome Aisha Tyler announced on twitter that she will be hosting the Ubisoft event for the second straight year. 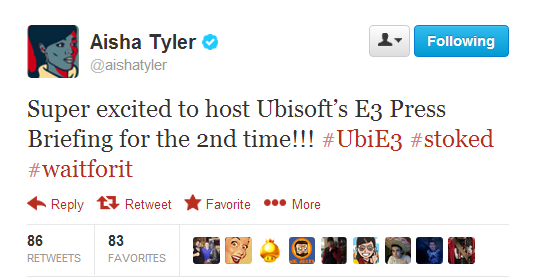 Little known fact: Aisha Tyler is the only person on Earth who can successfully use the “stoked” hashtag without sounding like a tool.  Seriously, try it for yourself and you’ll see.