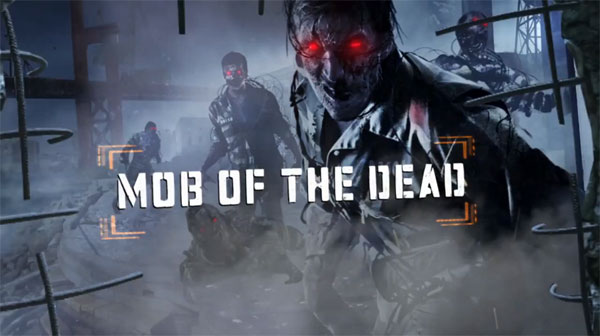 Uprising is currently available on Xbox Live, and is the second DLC Map Pack for the title. The new DLC includes four diverse multiplayer maps and a feature which I’m sure will tickle the trigger fingers of most Blops players – the all new “Mob of the Dead” zombies experience. And what is Mob of the Dead you ask? Well, it’s Ray Liotta, Chazz Palminteri, Joe Pantoliano and Michael Madsen playing four mobster inmates trying to escape a zombie infested Alcatraz.

Ray Liotta. Mobster inmates. Zombie infestation. Alcatraz. I’m pretty sure if you input those words into a calculator you end up with the formula for AWESOME.

But I digress. Mob of the Dead places players into the shoes of four prohibition-era mobsters: Billy Handsome (Liotta), Salvatore “Sal” DeLuca (Paminteri), Al “The Weasel” Arlington (Pantoliano) and Michael “Finn” O’Leary (Madsen) who are currently serving time in Alcatraz. You’d think being locked up in The Rock would be bad enough in itself, however these poor guys also have a zombie infestation to contend with. In order to survive, players will have to work their way through steel cells and aging concrete buildings as they fight their way through zombified prisoners and guards trapped on the island with them. San Francisco, man. Let’s hope they wear some flowers in their hair.

Not content to simply bring well known hollywood talent and zombies and mobsters into the mix, Uprising also debuts four new multiplayer maps set around the globe. There’s “Magma” – a modern Japanense village with volcanic eruptions which carve multiple paths throughout the town; “Encore” which takes place in the aftermath of a deserted London music festival and allows players plenty of opportunities for close quarters combat; “Vertigo” which is a futuristic high-rise mega-structure located in India and featuring multi-tiered pathways and spectacular vistas; and finally “Studio” which is a contemporary re-imagining of “Firing Range”, the highly popular map from the original Call of Duty: Black Ops. Sounding as if it’s going to be my favourite of the bunch, “Studio” is a Hollywood movie back lot with a bunch of cinematic themes that range from Sci-Fi to the Old West.

Call of Duty: Black Ops II Uprising is out now on Xbox Live for 1200 MSP or around $20. For those that have the Black Ops II DLC Season Pass, Uprising is included in it. For those who don’t have the Season Pass but are interested – the Pass will set you back 4000 MSP or around $69.95 and allows you access to all four DLC Map Packs planned for the year, as well as the Nuketown Zombies bonus map and an exclusive in-game calling card.

For a taste of the new Mob of the Dead content, take a look at the video below.