CD Projekt Red is continuing it’s long and cruel tradition of making things that will probably never run on my PC.  The Witcher 2 would have melted mine.  I’d better start saving for my upgrades because this new REDengine 3 they’re using will probably be so awesome my PC will die.  But at least it would die happily.

The REDengine 3 was basically created specifically for vast open worlds and non linear story lines, something that CD Projekt has been expertly doing now for some time.  I’m not even surprised that they would create some godlike super engine that’s going to be too beautiful for me to even handle.  If I wasn’t crazy excited about Cyberpunk 2077 and The Witcher 3 (I was. I so was) I would be now.  Adam Badowski, head of CD Projekt RED studio had this to say about the new miracle baby they’ve been working on:

“If we look at RPGs nowadays we find two approaches, one which emphasizes the story but limits the game world and one that builds a vast open-world but hampers and simplifies the story. With the REDengine 3 we combine the positive aspects of both approaches for the first time, creating an open environment with a complex, multi-thread story. Together with believable characters, a captivating tale and a world where players can roam freely without loading times, we will be able to move gaming to a new level with a realistic feel and full player immersion. When working on our previous titles, I didn’t dream that we would achieve something like this. Thanks to the support of all our fans, now we have the possibility to use REDengine 3 and create something many RPG fans dream of.”

Yeah so that gorgeous, amazing world you saw in Witcher 2?  That was only the crappy lame 2 engine.  This is… well this something else, a whole new ball game.  Apparently it “begins to blur the line between pre-rendered CGI movies and real time rendered graphics, bringing us closer to the most life-like world ever created in video games.”

Sorry, one second. I just got a nosebleed.  I have no doubt they’ll make good on this promise, which means that Geralt of Rivia is going to be the most life like, realistic, shirtless, human looking Witcher ever, which means mainly we’ll be constantly picking Tash up off of the floor following her frequent fainting spells. 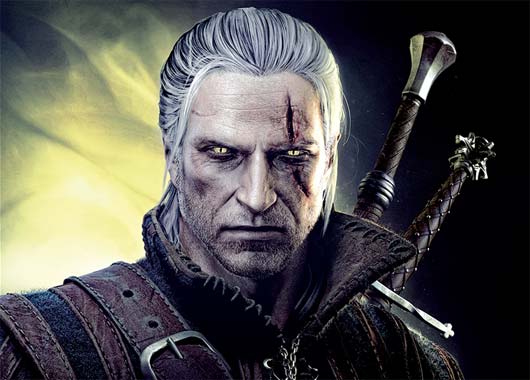 Here’s the techy bit from the release that I don’t quite understand:

The technology uses high dynamic range rendering with 64-bit precision that ensures superior picture quality with more realistic and precise lighting without losses derived from reduced contrast ratio. A flexible renderer prepared for deferred or forward+ rendering pipelines has a wide array of cinematic post-processing effects, including bokeh depth-of-field, color grading and flares from many lights. A high performance terrain system allows multiple material layers to be efficiently blended and uses tessellation for the best possible detail. The technology also includes seamless blending between animations and physics along with many more features. The engine uses CD Projekt RED’s new version of its proprietary REDkit editor with tools made specifically for RPG game creation. The editor can build complex, branching quests and set them in a free roaming environment with a simplicity not achieved by similar toolsets.

Some of you may have understood that.  I didn’t really.  All I read was “awesome awesome melt your face graphics amazing awesome cinematic awesome lots of high performance terms you can use to make magic fun times awesome unicorn amazing sex scenes you guys think of the sex.”

Can I just have CD Projekt’s babies already?