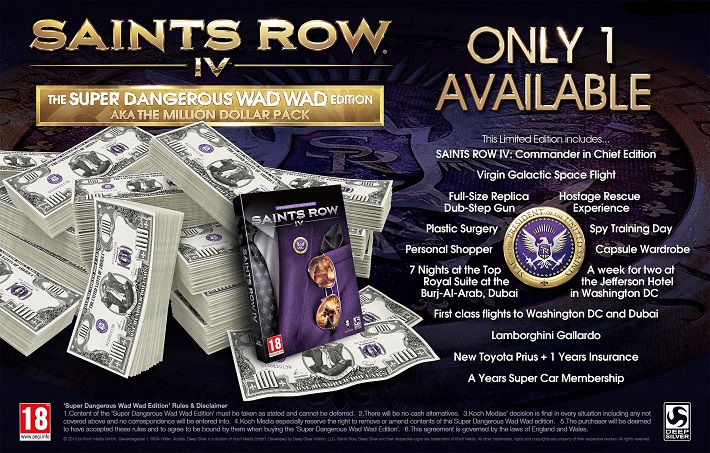 Special editions of games seem to be packed with more and more fantastic goodies these days, and if you’ve got a spare $1 million cash (yes, you heard correctly), the Saints Row IV Super Dangerous Wad Wad edition is simply perfect for you.

Now, you may balk at paying $1 million dollars for a special edition of a game. I’m sure you’d want to be getting something very special for that price, right? Luckily, the Saints Row IV Super Dangerous Wad Wad edition comes practically overflowing with awesome, amazing things. Don’t believe me? Then check out just what your cool million buys you:

Sounds good right? I mean, that’s a lot of rather awesome things. If you’re interested (and you have $1 million burning a hole in your pocket), you had better act fast. There’s only one of these bad boys and it’s only available to pre-order at GAME UK. Which makes this special edition both the rarest, and the most expensive special edition of a video game I’ve ever seen.

It’s also the coolest name for a special edition. Wad Wad. Heh. Get it? You know, because wad and…hey. Hang on a second. Didn’t we just recently discuss this very same idea in our recent Episode 8 of No Data Available? Are you listening, Volition?!

Saints Row IV releases August 20 for PS3, Xbox 360 and PC. Expect to see me become very scarce during this time.