Ahhh, 1998.  The year that gave us Monica Lewinksy, the iMac, and Bruce Willis blowing up an asteroid.  Sadly, none of those things will be featured in the newly announced 1998 Mode for Bioshock Infinite’s Burial at Sea Episode Two.  Instead, 1998 mode will offer a fresh challenge to players to who enjoy a bit more stealth in their shooters.  Or a lot more.  Read on for the details.

The announcement was made earlier today on the Irrational Games homepage.  The creation of Burial at Sea’s 1998 Mode came about after the enthusiastic response to Bioshock Infinite’s 1999 Mode, which cranked up enemy toughness to ridiculous levels while drastically reducing health, ammo and respawn points.  Believe it or not, that’s the definition of “fun” for some gamers.  1998 mode also ratchets up the difficulty, but in a less lethal, hopefully less controller-stomping way.

In 1998 mode, you’ll have to complete all of Burial at Sea Episode Two without making a single kill.  It had already been established that playing as Elizabeth in Burial at Sea will require more cunning and stealth than Bioshock fans are used to.  The days of running into a room, guns blazing are over.  But 1998 Mode will place an even heavier emphasis on stealth; forcing you to rely exclusively on non-lethal tools to advance.  Creative Director Ken Levine had this to say about how 1998 Mode came about.

“As we were developing this new style of gameplay, we started to see people self-impose non-lethal playthrough’s. Given the fan reception of 1999 Mode, we thought it would be cool to give them another way to play Burial at Sea that challenged their mastery of stealth tools.”

Burial at Sea: Episode Two will be released this March 25th, and will sell for $15.  Alternatively, you can still buy the Bioshock Infinite season pass for $20, which gets you both episodes of Burial at Sea, as well as Clash in the Clouds and a number of other nifty extras. 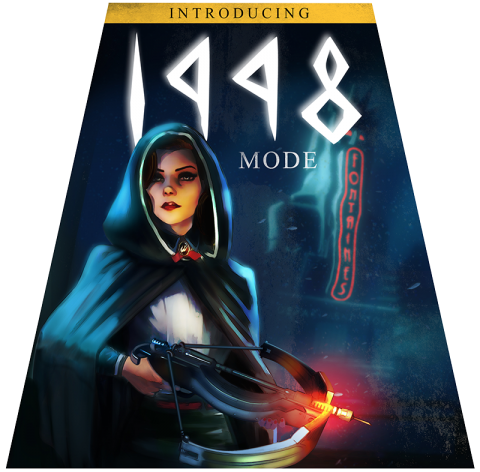