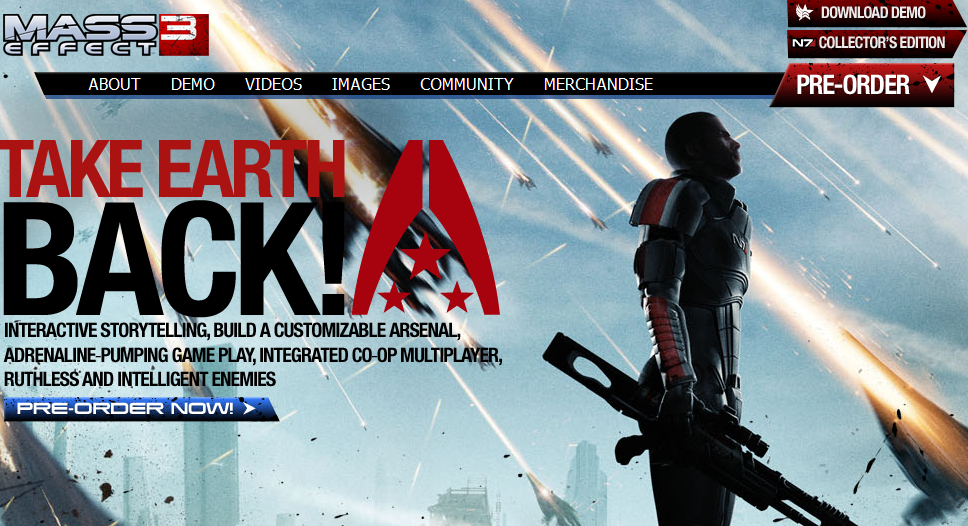 Earlier today, Bioware rolled out a massive (get it?) update to their Mass Effect homepage. Along with some beautiful new artwork, and extensive new details on the game’s characters and settings, the revised website has five new videos, each focusing on a key element of Mass Effect 3. Read on to watch the videos, but be warned… you’re gonna be spoiled, and you’re probably gonna have an accident in your pants. Consider yourself warned.

Still with us? OK, here we go. First up is a video entitled Build A Customizable Arsenal. It shows many of the options available for armor and weapon customization, in both single and multiplayer modes. Keep an eye out for glimpses of the branching power leveling system too.

Next up is Integrated Storytelling, which gives an overview of how the game’s dialogue system works. The information is mostly besides the point, though, since who doesn’t know about Mass Effect’s dialogue wheel by now? The real point of the video is to drool over some new jaw dropping game footage.

Third is Adrenaline-Pumping Gameplay, which offers a look at the game’s combat. It’s basically a minute and ten seconds of non-stop action, set to a bombastic drum beat. All types of combat are on display, from guns, to biotics, to the all new omni-blade.

And then we have Ruthless and Intelligent Enemies, which features clips of the many different enemies you will face in Mass Effect 3. Sharp-eyed viewers will also catch glimpses of Kai Leng, a female Commander Shepard (known to fans as FemShep), and Kaidan Alenko, whom we haven’t seen much of since the game’s unveiling early last year.

Lastly, we have Integrated Co-Op Multiplayer, which is basically a re-cut version of the multiplayer trailer that was released a few weeks ago. It’s just as cool as you remember, though, so why now watch it again? Maybe brush up on your knowledge of the different classes you can choose from…

Mass Effect 3 launches on March 6th. The marketing blitz is just beginning, folks. Holy sh*t. This game is really happening, isn’t it? It’s actually going to be really actually in my actual hands in less than a month. I… I need to go lay down.