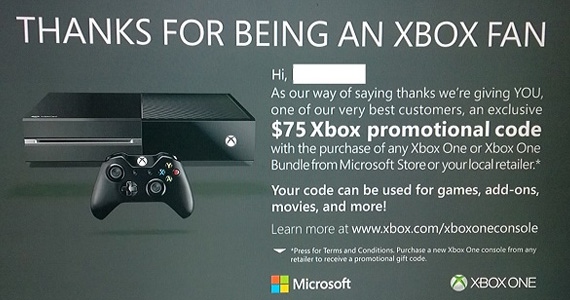 If you’ve been wanting to upgrade to an Xbox One but have been waiting for a sign from above – you might just be in luck. Microsoft are currently running a very select, very limited time promotion whereby their “very best customers”  are being offered a $75 promotional code if they buy an Xbox One or any Xbox One bundle.

There’s no word on exactly what sort of criteria qualifies a person as a “very best customer” however it appears only a subset of Xbox 360 owners across the US, UK and Canada are being targeted to receive the promotional credit offer. The offer itself has a July 31st deadline, with those who have been offered the promotional credit needing to redeem the credit by October 15th.

To find out whether you are one of the lucky ones selected for the offer, follow these steps:

If you’re an Xbox 360 owner living outside the US, UK or Canada, it seems you are currently out of luck when it comes to the promotion being offered in your country. We don’t like to say never here at Save Game, but we think it’s pretty safe to say that in this case, bad luck for not being an American, Briton or Canadian.
Edited with BlogPad Pro