It’s no secret that I am a Mass Effect fan. The amount of Mass Effect related memorabilia and licensed products that currently take up a large proportion of my lounge room attests to that. So when Mass Effect: Galaxy arrived on the iOS platform more than a year ago, I was both excited and disappointed. Excited that the Mass Effect brand was expanding, and disappointed I wouldn’t be able to experience the game because I did not own a smartphone. One month ago I joined the ranks of iPhone owners, and the first game related app I downloaded was Mass Effect: Galaxy.

Given that Galaxy is set in the Mass Effect universe, and introduces two of the squadmates available to you in Mass Effect 2, I had high expectations. One of the strengths of Bioware games are their focus on story and character development, and whilst I wasn’t expecting a lengthy tale given the game is for a mobile platform, I was still expecting something above the usual offering. What I received was disappointing.

Mass Effect: Galaxy plays like a top down shooter. You move your character (and for this game you step into the shoes of  Jacob Taylor) by tilting your phone. This control scheme takes time to get used to, and I found it jarring and difficult to master. Perhaps it was because I was not used to these controls (and I did find I adapted and improved with practice), however the amount of times my character became stuck on randomly placed items in the levels was frustrating to say the least. 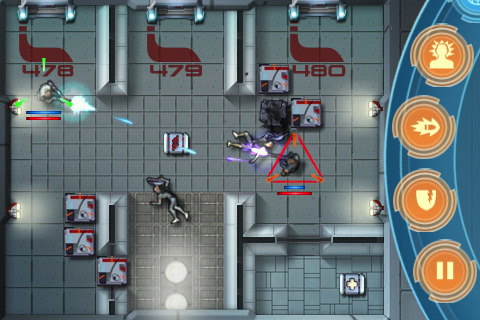 The level design combines repetitive room-layout stages with confusing ‘is this something I can walk over on the floor or is this a wall’ item population which makes traversing the levels (keeping in mind the ’tilt to move’ commands) extremely annoying. More than once my character became stuck on something I couldn’t see and I had to watch helplessly while he was gunned down by enemies, only to start again and have him become stuck at some other random place.

Gameplay wise, there really isn’t much to the game. You enter a room, clear out the enemies within it, and move on to the next area to do the whole thing all over again. The game features an auto-lock function which automatically targets the closest enemy to you. Whilst you can manually target other enemies by tapping them, having to tilt the iphone whilst simultaneously tapping enemies to select them and then tapping on another part of the screen to employ your abilities (biotic, combat and tech) is unweildly and un-intuitive. Until you master the controls, you’ll die a lot, or you’ll randomly tap areas of the screen and clear areas with sheer luck. This is one of the major drawbacks for me with this game – its formulaic but not formulaic – the gameplay follows the same formula, but how you defeat enemies seems to be more a matter of luck than skill. There doesn’t seem to be any hard and fast “this works” method of tackling the areas, so what works in one area may leave you dead within two seconds in another. If I finish a game without really knowing what I did to finish it, that to me, is not a good thing.

Galaxy is also story-lite. There’s an over-arching plot which provides your motivation for progressing the story and new locations and characters are introduced, but it’s at a very superficial level. Cutscenes which further the plot are interspersed between combat areas and there is a fair amount of dialogue. Disappointly, only the first line of dialog is voiced, with everything else being subtitled. Whilst I realise this is a mobile game, and the level of content reflects this, having only the first line voiced is jarring and makes me wonder why they bothered. Sure, its a nice touch, but it does feel odd to have the first line voiced and then suddenly silence for the rest of the exchange. 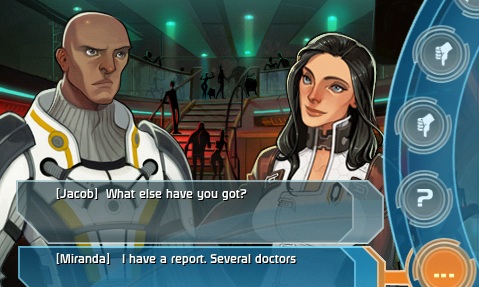 Voice over issues aside, the sound work within the game is fantastic. It matches the Mass Effect series perfectly and features all the iconic songs from the games that are instantly recognisable. It’s adrenalin-inducing when it needs to be, and understated during dialogue-heavy cutscenes. In short, it does everything it needs to do and is a perfect accompaniment to the game.

Unfortunately, the soundtrack is the only thing that distinguishes this game as being part of the Mass Effect universe. Take away the soundtrack, and Galaxy could be any stand-alone top down shooter with biotic elements. The game never really feels like a Mass Effect game in the way it plays, and although the characters and locations are familiar, the game simply doesn’t have that Mass Effect magic. This is disappointing, as Galaxy could have been an example of how to showcase a triple A game on a smaller, mobile platform. Instead, it’s simply an uninspired, watered down version of the parent game that retains the same formula, but loses the magic in implementation.

Mass Effect: Galaxy is currently available to download at the app store for $0.99. It’s a paint-by-the-numbers foray into the Mass Effect universe which will take you at max 1-2 hours to play through. The cut and paste nature of combat enables the game to be played in small chunks of five minute sessions, perfect for commutes or for those with a spare few minutes. Those new to the series will be able to play the game without feeling like they’ve been thrown into the canon-deep end, but those looking for a unique Mass Effect experience will be disappointed. The game has elements of its parent series – a nice mix of dialogue and combat – but strip away the fantastic soundtrack and the game and its plot could be any top-down shooter listed on the app store.

Download it if you’re curious, but don’t expect a game which draws you into its universe or story.