When Bioshock Infinite launched a little over a year ago, it was met with near universal acclaim.  It was hailed as an instant classic, and one of the best games of this past generation.  So expectations for Burial at Sea, its mysterious expansion DLC, were high.  While the first episode was entertaining enough, it was far from what fans were expecting.  So will Episode Two be equally underwhelming, or will it capture some of the magic that made Bioshock Infinite so memorable?  Read on to find out.

Burial at Sea Episode One began promisingly enough.  It offered us a chance to experience Rapture before the rebellion and war that left it in ruins.  It was a Rapture none of us had ever seen before, and it was a thrill to see the underwater metropolis in all its glory.  But the thrill was short lived.  Far too soon, it became a series of gun battles through dark and dingy corridors with very little plot to support the action.  That all changed in the story’s closing moments, when it threw a knockout punch of plot that few saw coming.  The ending of Episode One left two huge unanswered questions hanging in the air.  Would Episode Two improve on part one’s lackluster gameplay, and how would that gonzo final minute impact the rest of the story? 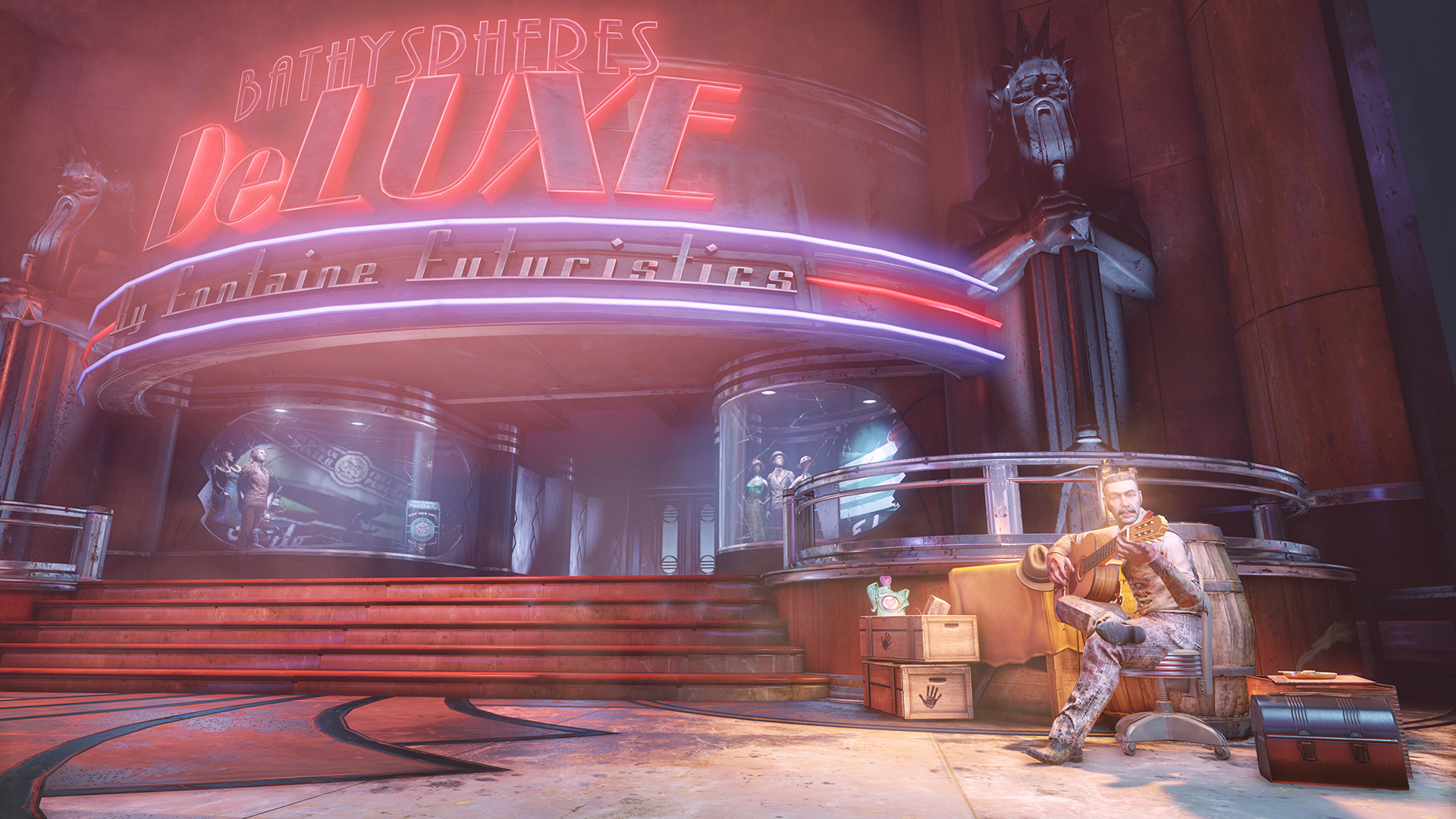 From the opening moments of Burial at Sea Episode Two, you realize that this DLC is nothing like its predecessor.  After an optional “Previously on Bioshock” video which recaps all of the major events in the saga thus far, you’re taken on an unexpected detour which not only adds some much needed emotional weight to the proceedings, but also forcefully (and finally) states that Burial at Sea is much more than a half baked afterthought.  This is a real adventure, with very high stakes.  But in many ways, it’s also a very different tale than the one told in the main game.  Once back in the bowels of Fontaine’s Department Store, you realize that the rules set in Infinite have changed, and guiding Elizabeth on her journey will be dramatically different than your previous adventures as Booker DeWitt.

Irrational never tried to hide the fact that stealth would play a much more important role in Burial at Sea than it ever had before in a Bioshock game.  They even released a video for 1998 Mode; an achievement which challenged players to complete the DLC without ever taking a life.  But honestly, I didn’t take it seriously.  I mean, how stealthy could the game be?  In a word: very.  While Booker was equally adept at creeping around cover as he was charging in with guns blazing, Elizabeth must stay hidden to survive.  Ammunition and money are scarce, and there are no infusion-powered shields to protect her.  One solid shotgun blast, and you’re left with a mere sliver of health.  Just enough to scamper away, if you’re lucky.  Staying crouched and hidden, especially early on, is vital.  Enemies will hear your footsteps, and investigate any unusual sounds or activity.  Taking a page out of the Metal Gear gameplay handbook, enemies also have status indicators above their heads.  By watching these indicator lights, you’ll be able to tell whether an enemy is passively listening, actively investigating, or coming to kill your ass. 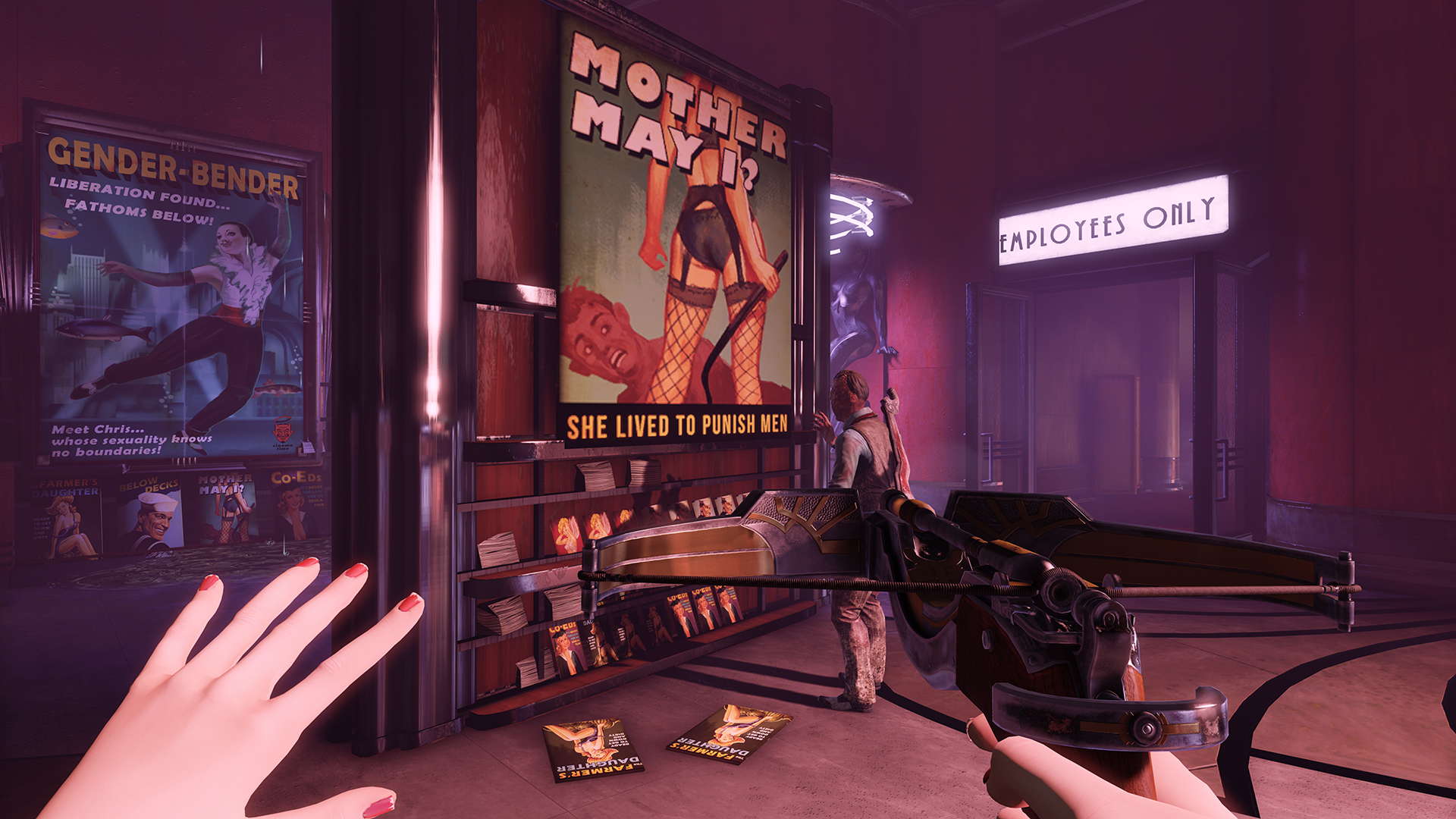 Early on, the only weapon you’ll have is your not-so-trusty Air Grabber, which does little more than stun attackers in a stand up fight, but can knock out unsuspecting foes from behind.  Elizabeth’s arsenal is soon supplemented by a crossbow, which can shoot many types of non-lethal arrows.  But these too are hard to come by, and must be used wisely, and with precision.  Plasmids play a much more defensive role this time around, with the returning Possession and Old Man Winter being joined by Peeping Tom and Ironsides.  Similar to Halo’s Promethean Vision, Peeping Tom enables you to see through walls, and once fully upgraded, to become invisible.  It’s an indispensable asset, and is far and away the plasmid you’ll use most in the game.  The other new plasmid, Ironsides, allows you to capture incoming bullets, and turn them into ammunition and health.  The problem is that relatively few enemies carry guns until later in the game, and Ironsides uses a prohibitively large amount of EVE.  The end result is a power-up that feels a little out of place, unless you’re determined to forgo stealth entirely.  In which case, Ironsides becomes an absolute necessity.

Adding a brand new play mechanic like stealth to a pre-existing game is no easy task, and is something that could potentially take years to perfect.  Given the shortened development timetable Irrational had to work with, it’s no surprise that Burial at Sea Episode Two feels a little out of balance.  Some enemies will react to the slightest noise or movement, while others will walk right into you, as if you weren’t even there.  Peeping Tom will show a group of splicers many rooms away, yet somehow miss one that’s right around the corner.  And while Elizabeth is half the size of Booker, her movements feel just as stiff and plodding as her male counterpart.  Overall, the gameplay had a slightly unpolished feel.  But thankfully, these annoyances don’t detract much from Burial at Sea’s fun factor.  The DLC is a blast to play at times, adding new layers of strategy to combat without ever losing that classic Bioshock feel.  Episode Two also makes much better use of the game’s hooks and skyrails than Episode One, using them to open up new avenues for exploration and combat.

Graphically, Episode Two is another showcase for the incredible artists who until recently populated Irrational Games.  Rapture has never looked better, and the new areas you explore are filled with visual delights both grand and minuscule.  Courtnee Draper gives another amazing performance as Elizabeth, this time without the aid of Irrational’s talented animators.  Allowing players to control Elizabeth in Episode Two meant that the responsibility for bringing her life fell almost completely on Courtnee’s performance, and she delivers.  The entire voice cast is superb, as is the music and sound design.  From the sorrowful moans of a Big Daddy, to the frenzied gibberish of a Splicer, Burial at Sea is a delight for any audiophile. 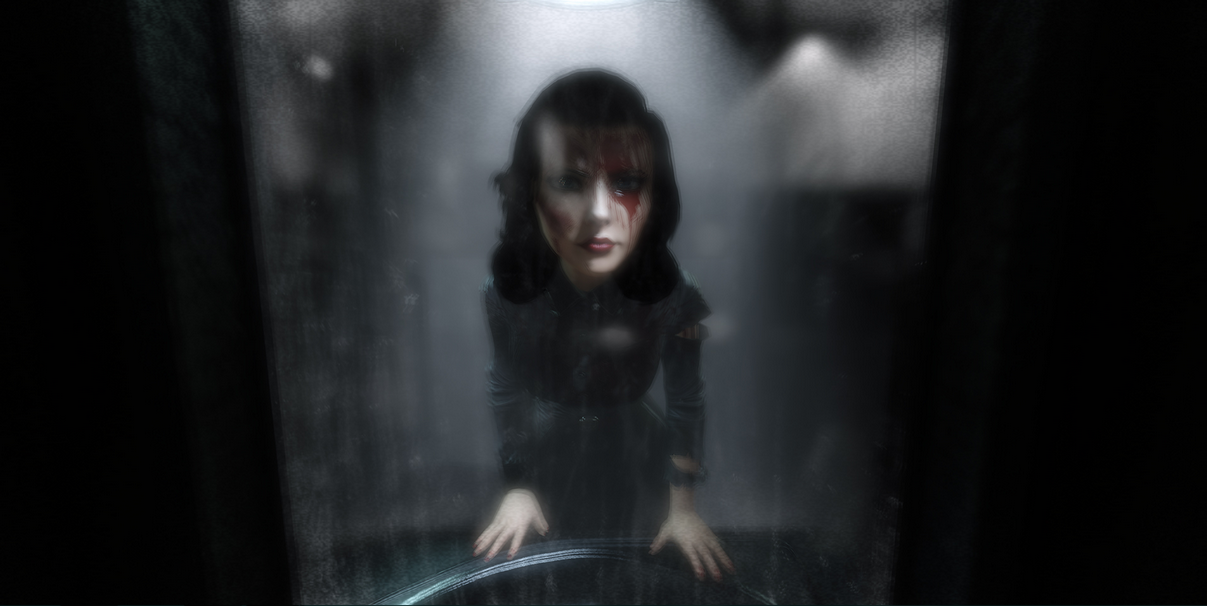 Putting aside the ups and down of gameplay, looking past the visual and auditory splendor, the heart of any Bioshock game is its story, and Burial at Sea is no different.  Episode One ended with a startling cliffhanger; one that not only left the DLC’s conclusion in doubt, but also had the potential to change how players conceptualized Infinite’s ambiguous ending.  A lot was riding on the story Episode Two would tell, and while I won’t spoil the game’s ending, I will say that it fell well short of my expectations.  As the credits rolled on Burial at Sea, I was left with the feeling that the entire experience was a tale that few wanted or needed telling.  For his final act as Bioshock creative director, Ken Levine tries to weave together the stories of Columbia and Rapture into one magnificent tapestry.  But he presents answers to questions that nobody was asking, and fills in holes that hardly anyone saw.  Viewed as a whole, the story of Burial at Sea feels decidedly hollow; an intellectual indulgence devoid of empathy and warmth.  Saddest of all, Elizabeth becomes the tapestry’s thread, weaving in and out of Irrational’s two worlds, holding them together with an uneven, tenuous knit.  It’s a somewhat callous sendoff for Elizabeth, who in her short time on gaming’s biggest stage, has become a beloved character, and an iconic symbol of courage and compassion.  She deserved a far better encore than she was given in Burial at Sea.  We all did.