Our review for Star Wars: Battlefront is now up! We jump into the new game and put it through its paces, all while reminiscing over other Star Wars games.

It’s been a long, long time since a game took us to that galaxy far, far away. The games set in the Star Wars universe were more prolific once, many refusing to be bound by either expectation or genre. They weren’t all great and didn’t appeal to everybody, but some of the highlights of gaming can be found here.

X-Wing, Dark Forces, Galactic Battlegrounds (yes, it’s a reskinned AoE2 with aerial units), TIE Fighter, Rebellion (well, to some), Republic Commando, Rebel Assault, Knights of the Old Republic, Force Commander (I still have nothing but positive memories about the game, even if the consensus is it was terrible).

There’s one game absent from the list above that ought to be present. 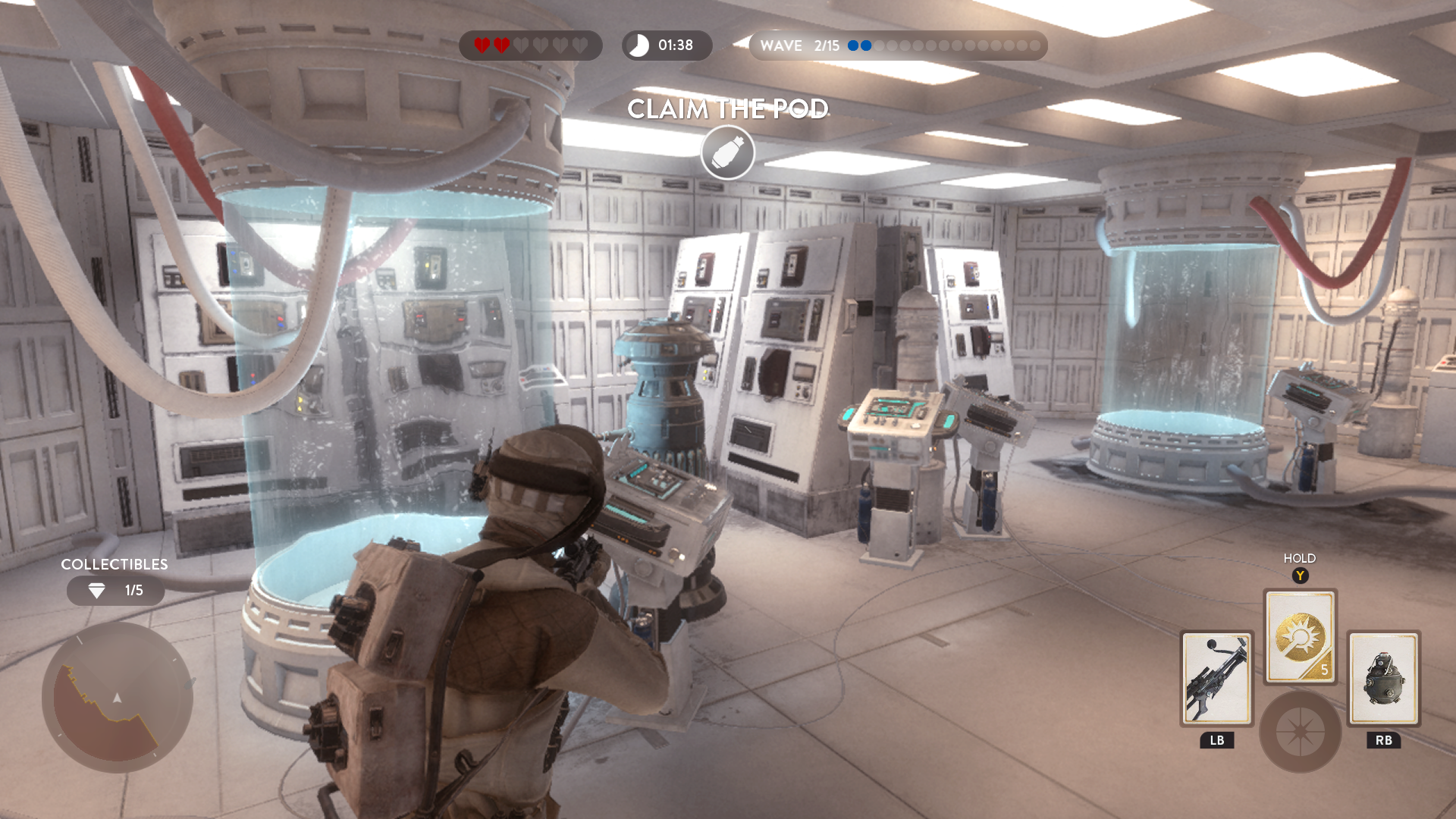 The original Battlefront games took us to the ends of the galaxy, from the temperate forests of Kashyyyk, the secret rebel base on Yavin IV, or the ornate waterfront city of Naboo, we went to locations that stretched from the core worlds to the outer rim territories. There were a myriad of locations, each more Star Wars-y than the next. With a new Battlefront game out, it’s impossible not to look back at what’s come before.

Whether it be other games from DICE or even EA’s stable, or those Lucas-suffix games now locked-away in the Jedi archives, no Battlefront game could escape comparisons.

The first thing you need to know about DICE’s Star Wars Battlefront is that it nails the atmosphere. Star Wars has always come with its incomparable set pieces, comprised of setting, sound and music. The iconic music immediately draws on our mood, where character-driven leitmotifs battle and blend against the other music, and carrying the emotional weight of each moment further.

Distinct sounds hone in our sense of a place, adding a degree of realism as we don’t have the same tendency toward disbelief with sound – even if they’re wholly unique to the series. Lastly, instead of the polished future we’ve dreamt of, it’s the lived-in locales that have brought credibility to the science fantasy of Star Wars – we have less need to validate that the circumstances or arrangement of the setting could be lived in, because the material tells us it has been. 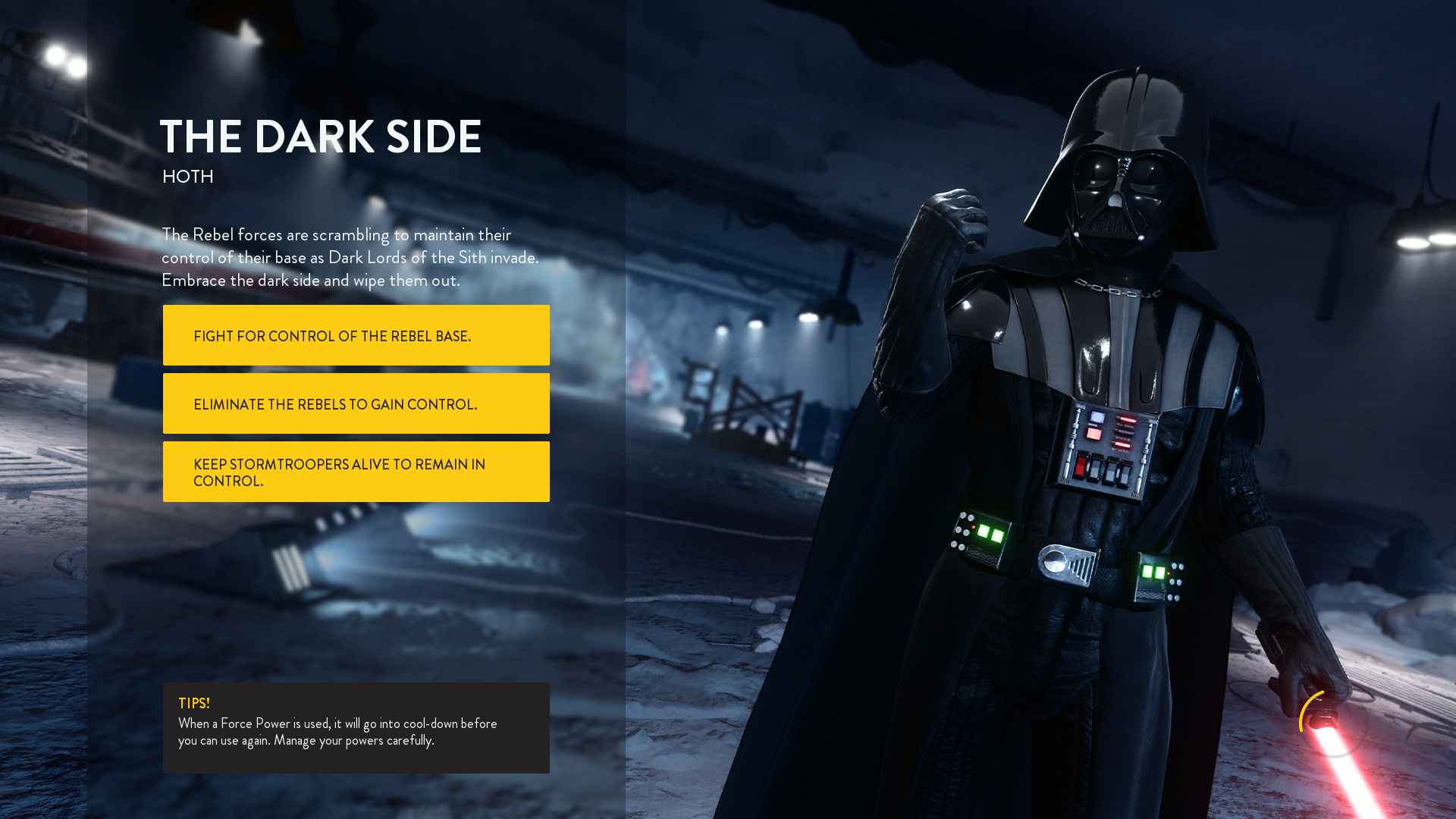 In its reach for all of these, Battlefront succeeds.

Each of the five locations in the new Battlefront so far feels rich with detail – this also includes the first look at a Force Awakens location with The Battle of Jakku.

The environments don’t come across as facades – this isn’t Star Wars wallpaper stuck to posterboard, but authentic recreations of places in the films. Each location looks spectacular, both in terms of the intricate detail in elements that have been modelled and added to the environment, but also the detail present in the textures, and the way those textures respond to the near-realistic lighting used.

The various characters and weaponry do each faction credit, and while they may not be lifelike, they’re distinct from their real life counterparts to a degree that the uncanny valley, it avoids.

The planets draw on prior depictions in the case of Hoth, Tatooine and Endor. Sullust, the other major planet at release, draws on lore from the quasi-canon-ish Star Wars Expanded Universe and the Clone Wars series – a single line by Darth “The Master of Evil” Vader in ROTJ not quite enough to bring the place to life. The extended formerly-canon lore is also the basis for a lot of the weaponry and equipment in the game.

The music of Battlefront unsurprisingly draws upon the score by John Williams, and in terms of sound effects, they’re on the money for the unmistakeable twin-ion engine whine and blaster fire that were in the films. 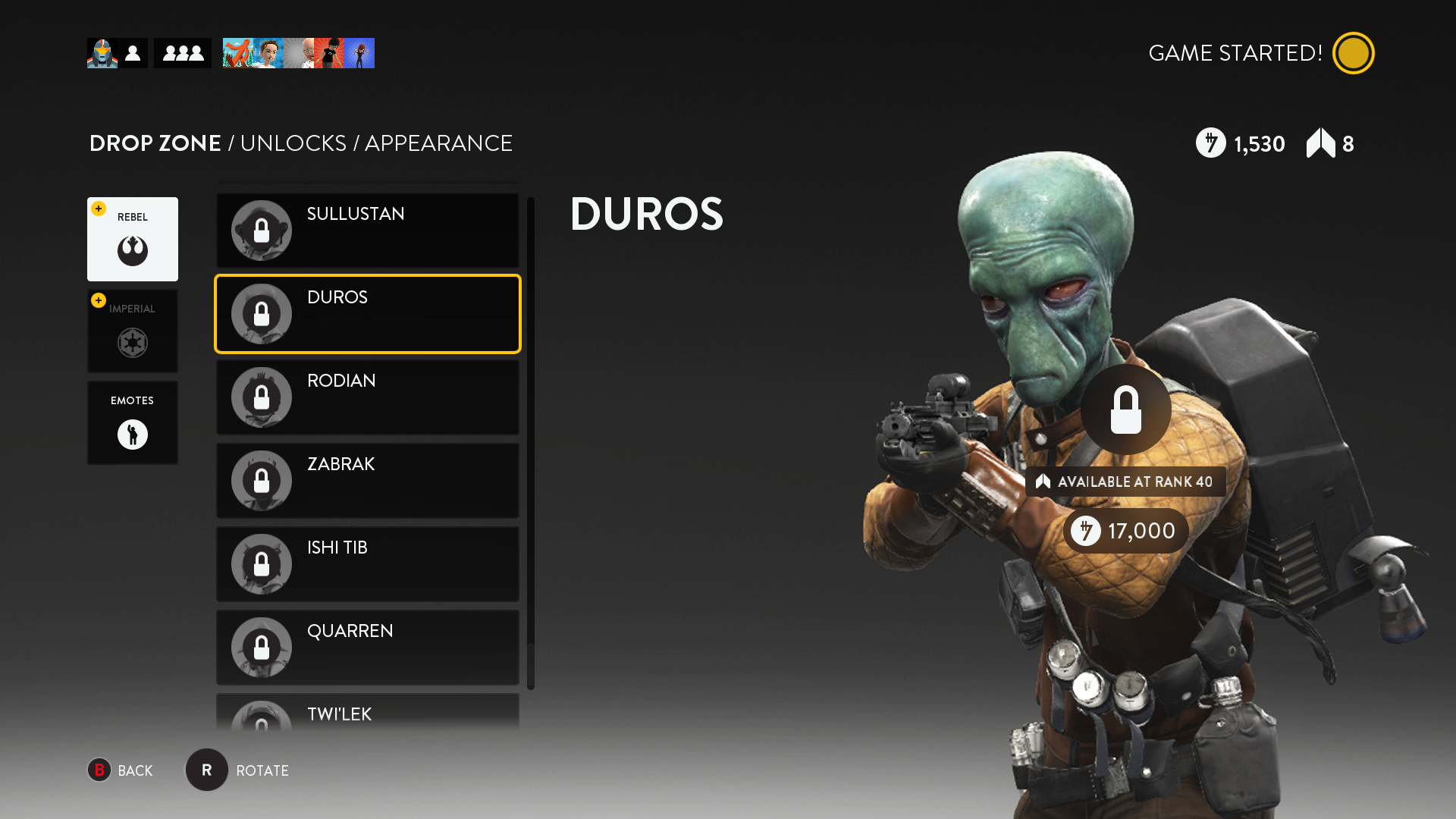 Not to go all Ponda Baba on DICE, but setting up this galaxy with so much detail and authenticity, it’s a crime that there’s no true single player campaign to capitalise on the elements. Having immaculate details in the locations – and make no mistake, the game is a visual and aural feast – it’s all for naught if exploration is punished. There are cool easter eggs and hidden secrets, but good luck finding them with a dozen stormtroopers breathing down your neck.

Instead there’s nothing to bring story, nothing to foster a deeper attachment to a game that’s mostly about the surface.

It’s because the game does that Star Wars feel so well that it earn an experience beyond what its gameplay deserves. Battlefront doesn’t do enough to stand on its own. There are some strengths to the approach taken that do stand apart from the cool factor that a new Star Wars game brings, but there are too many misses here.

It’s easy to find a game, get in and start blasting away. Players can be valuable contributors to a team in their first few matches, and solid teamwork bridges most gaps in experience and equipment. There isn’t a lot of sophistication with how the game plays out, and it’s this that hurts the game most. It plays more like a polished Garden Warfare, which means it’s friendlier to the more casual players, but it also means there’s no larger world to step into once you find your footing.

As a result, there’s not as much of a focus on team composition – it’s regular stormtroopers or rebels, and occasionally a hero. As might be expected, heroes dominate their surroundings and do in turn dominate the post-match summaries (which take far too long to finish up). 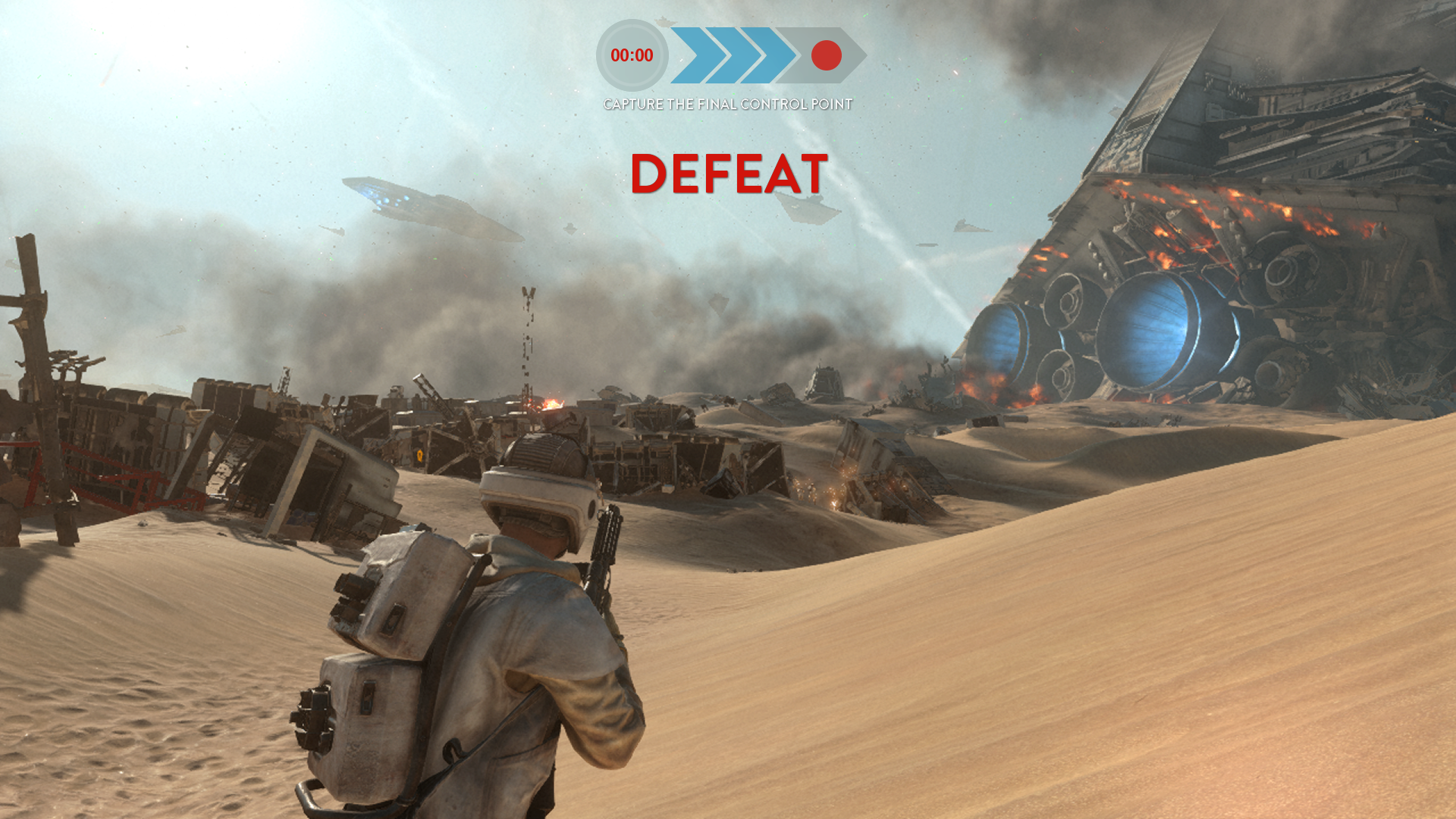 Powerup tokens for heroes, vehicles and equipment can be found around each map, each adding a few wildcards to the course of battle, but are implemented in an intrusive, very videogame-ish manner. That they’re pick-ups to be run over and activated means some players will also dominate due to remembering where the vehicle or hero powerups regularly appear – and then heading to wherever the opposing faction tends to spawn and doing their thing.

There are many modes to play, but only the Walker Assault captures scale reminiscent of the iconic moments in the films. Most of the rest feel like Star Wars equivalents of tried-and-true game-modes, and while that might work for some, it doesn’t deliver the experience necessary to make Star Wars Battlefront succeed.

The slim pickings in terms of the planets on offer is also a problem – each planet does have a few locations where gamemodes might take place, but with only four planets in the base game (five counting The Battle of Jakku), any sort of longevity here is reliant on a season pass that is priced rather steep. The fighter squadron mode does change things up a bit, but it misses the brilliance of the previous Battlefronts that paired dogfighting and troop transport with the battles carrying on inside ships – there’s also limited ship selection available, and none of the unlockables affect the mode in any way.

There are some singleplayer/coop options available, but these are limited to either waves of enemies, hunting down soldiers and heroes, or tutorials designed to introduce new gameplay concepts.

Other frustrations with Star Wars Battlefront revolve around matchmaking. It’s not difficult to find a match, but it’s also not uncommon to join a game and have it end within the minute, meaning you’ll spend more time in the post-match summary than playing. Some second rounds can also leave you flying solo against an opposing horde. 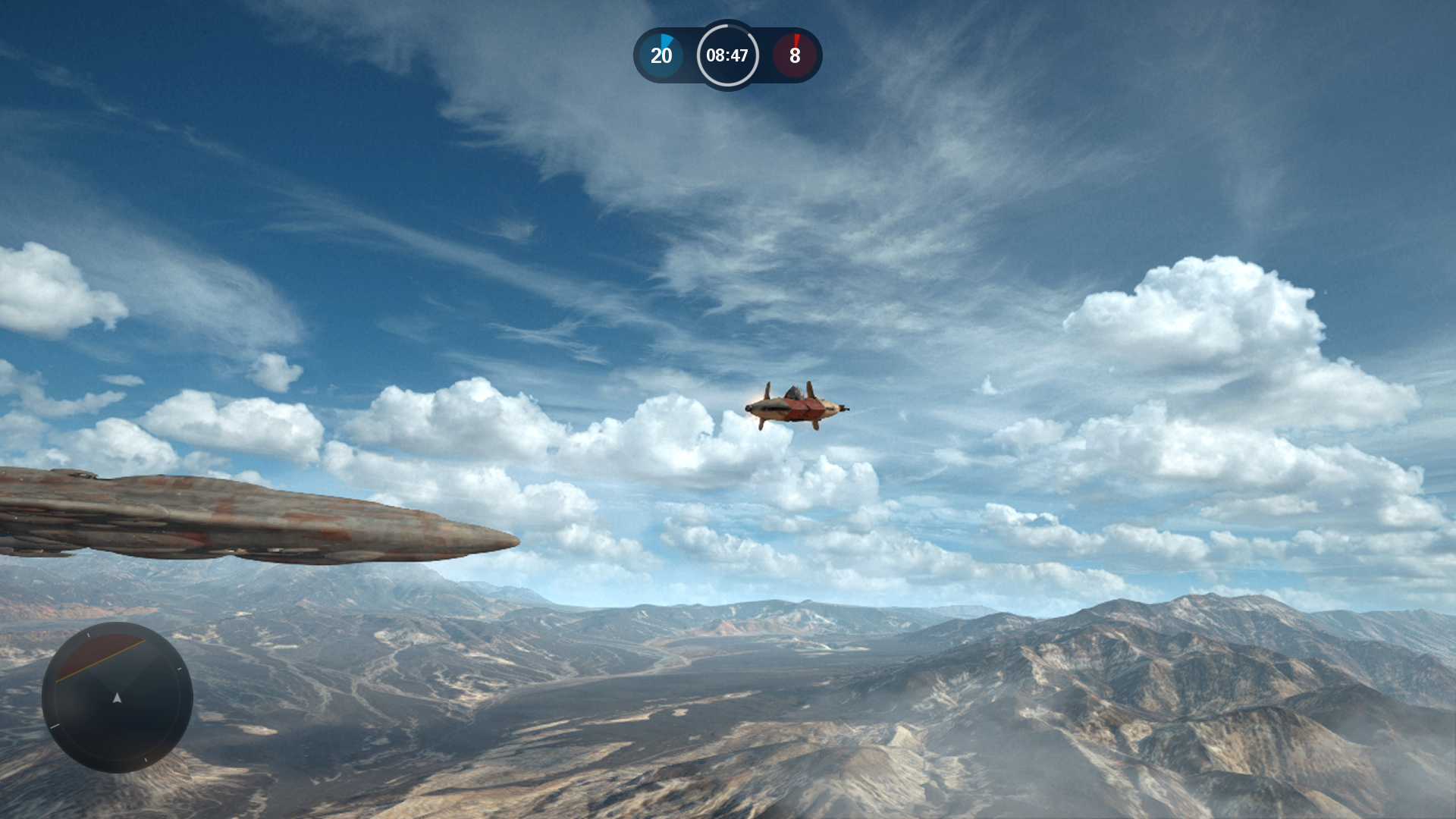 Like a lot of EA multiplayer, content and abilities are locked behind ranks. Surprisingly, and very welcome, there is no trading card style unlock for abilities, but there is a very real grind through ranks and credits to earn them.

Yes, the game can be fun. It can even be fun for a few days. It just doesn’t have the staying power with the content it currently has, the unlock grind it’s gone with, and very basic gameplay. In the end it’s really this that hurts the game most. The variations in play style are locked away behind a grind, and it doesn’t seem as though the game cares one way or another. Maybe future patches and content releases might help Star Wars Battlefront become the game it could have been, but if you’re after anything more than a quick Star Wars fix, move along. 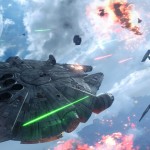 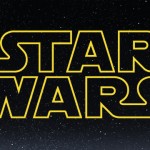