Review: The Evil Within Story DLC – The Assignment & The Consequence

Tango Gameworks and Bethesda’s The Evil Within promised “a return to the roots of survival horror”, and with one of the fathers of the genre Shinji Mikami at the helm, it definitely had plenty of potential. Sadly, the game was heavily marred by technical bugs, poor design choices and an almost incomprehensible narrative. All the key ingredients for a great game were there, but they weren’t executed properly. But it seems old Shinji and his pals had a few tricks left up their sleeves, and the two story-focused DLC’s, The Assignment and The Consequence almost completely redeem the franchise. Many (but not all) of the fundamental flaws of the main game have been greatly improved upon, and the developers have even taken some risks and included new features that change the gameplay to keep it fresh and interesting.

The first major improvement is the story and its characters. To put it bluntly, The Evil Within’s story was a total mess. It had a fascinating premise, but it was so poorly executed and so incomprehensibly written that countless leaps of logic and assumptions were required to even understand the basic narrative thread. The game was so focused on flooding you with horrific imagery and putting you in outrageously tense situations that it either forgot or just downright refused to link those situations and that imagery together coherently. This was made worse by having a fairly boring protagonist – Detective Sebastian Castellanos – who seemed both largely unfazed by and completely unable to understand anything that happened in the game.

However, in The Assignment and The Consequence, the big unanswered questions and narrative holes that were left by the main game are not only addressed with flare and intelligence, they are also presented from the perspective of one of the secondary (but far more interesting, better written and more relatable) characters, Castellanos’ rookie partner Juli Kidman (who is voiced brilliantly by Jennifer Carpenter). Indeed, as the two expansion packs progress, we learn through Kidman about her involvement with and tenuous loyalty to a mysterious company called Mobius (only briefly alluded to in the main game), which provides an important piece to the main game’s narrative puzzle. We also discover more about the evil Ruvik and his ethically questionable research partner Dr. Jimenez’s motives and personal backgrounds, and just how and why Sebastian even ended up being a part of the whole messed up situation in the first place (which actually goes a long way to making him a far more relatable, interesting character). The DLC’s not only tell the “other side of the story”, but they also make the main game make sense, giving you the necessary context and information to retroactively connect the dots and form a complete picture of each character’s motives and place in this interconnected world through well-paced, intelligent writing. 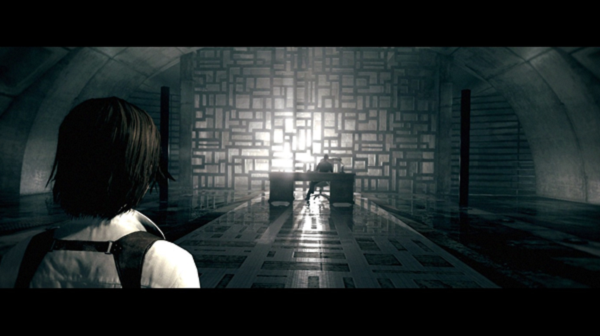 The gameplay and overall feel of the game have undergone changes for the better too. The Evil Within was sufficiently terrifying in its own right thanks to its incredible monster design, utterly twisted environmental traps and impending sense of dread about “what else could I possibly have to deal with?” However, it was not particularly well-paced, giving you access to powerful weapons and upgrades or having you complete scripted high-intensity action sequences quite early on, and although in the moment you would find yourself wiping sweat from your brow while trying to headshot enemies to conserve ammo, the game rarely stuck with you once you switched it off.

In contrast, for large sections of both The Assignment and The Consequence, Kidman is totally unarmed and it’s up to you to use your wits to remain out of sight and take advantage of the environment to eliminate enemies wherever possible. Making Kidman so vulnerable ups the intensity from nail-biting to nervous-breakdown-inducing, really making you stop and think about how to approach a situation because making a mistake can literally be fatal (many enemies are able to perform one hit kills). And when you do finally get a weapon or get to take part in a fast-paced scripted sequence (of which there are a couple of excellent ones), it feels so much more like you’ve truly earned it. Of course, the flip side to all this is at times the DLC feels incredibly unfair, and you’re going to need a lot of patience for some sections, especially a particular boss encounter where your only option is avoiding the monster’s gaze.

This greater focus on stealth is thankfully aided by improved stealth mechanics. The Evil Within’s stealth gameplay was rudimentary and frustrating at best, but the DLC adds vital gameplay elements that actually make it incredibly satisfying to sneak around. These include the ability to lure enemies by calling out to them, take cover, move quickly between cover points, and coloured markers which highlight the location and awareness level of enemies (though players seeking an extra challenge can try Kurayami mode which removes these). Unfortunately, there are still remnants of the main game’s problems, such as sluggish movement and unresponsive controls, which are especially irritating when you need to make precisely timed dashes for a locked door etc. 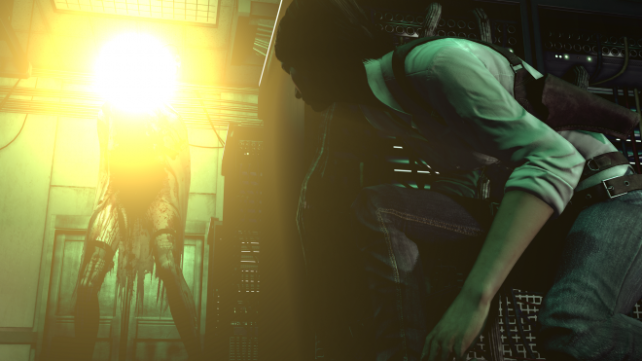 Finally, many technical aspects of the game have been improved considerably as well. There is still texture pop-in on the older generation consoles; however it’s been greatly reduced in the current gen console and PC versions. Graphical glitches and framerate drops are now few and far between (even in some of the richly detailed outdoor sections the framerate is pretty stable on the PS3 version), and lighting and shadows are more complex and varied between environments. However, two awful things that remain, and are a huge source of frustration, are the aspect ratio and camera angle. The camera is very close to Kidman, and the game is presented in widescreen format with large black bars at the top and bottom of the screen. Although the intention behind this is to create a sense of claustrophobia and fear of the unknown through reduced visibility, it primarily just ends up causing intense frustration as you often find Kidman and one object adjacent to her will take up the entire screen, causing you to frequently bump into walls etc., which is especially problematic during boss encounters. It was a poor design choice in the main game, and it remains a poor design choice in the DLC.

In a lot of ways, The Assignment and The Consequence feel like the game The Evil Within could have been. It’s frustrating that it took paid DLC to create the experience that we all expected from the base game, but it’s better that we got it eventually than not at all. Regardless of how they felt about it, anyone who played The Evil Within should absolutely get both these DLC’s and develop a new appreciation for the interesting story, deep characters and positive gameplay elements that this franchise is evidently capable of delivering.

The Assignment and The Consequence score an 8 out of 10.