“Oh! An indie game with a silent protagonist, how philosophical,” you mutter to yourself sarcastically as you pick up the controller to play Supergiant Game’s new action RPG, Transistor. Yet in the context of this game, the silence actually has something profound to say. In Transistor you play as the enigmatic Red, a prolific singer and resident to the city of Cloudbank who loses her voice following an assassination attempt at one of her shows. Cloudbank, the city much of the game inhabits, is eerily beautiful. Its contrasting pastel colors and noir style reflect a future that is not far from our own—a world that is mechanized and customizable yet oddly monotone throughout largely thanks to the gorgeous artwork Supergiant is known for.

Seconds into the game you are thrown in to the action. Following a brief cut scene, Red runs over to a man’s body and pulls an incandescent talking sword, known as the Transistor, out of his chest. Soon after that, the Transistor becomes your partner in crime for the entirety of the game, granting Red the power to fight against those who are nefariously plotting against her and what seems to be the city itself (what we find out is called the Process). The narrative in Transistor is unique, not necessarily in how you find various items that provide background information, but in how the art and music within the game help to tell the tale through empathy within the player. Everything, from Red’s silence and communication through terminals, to the overall aesthetic of the world around her, paints a story for the player and provide an ending that truly strikes the heart. This is how short stories are done in the video game world. 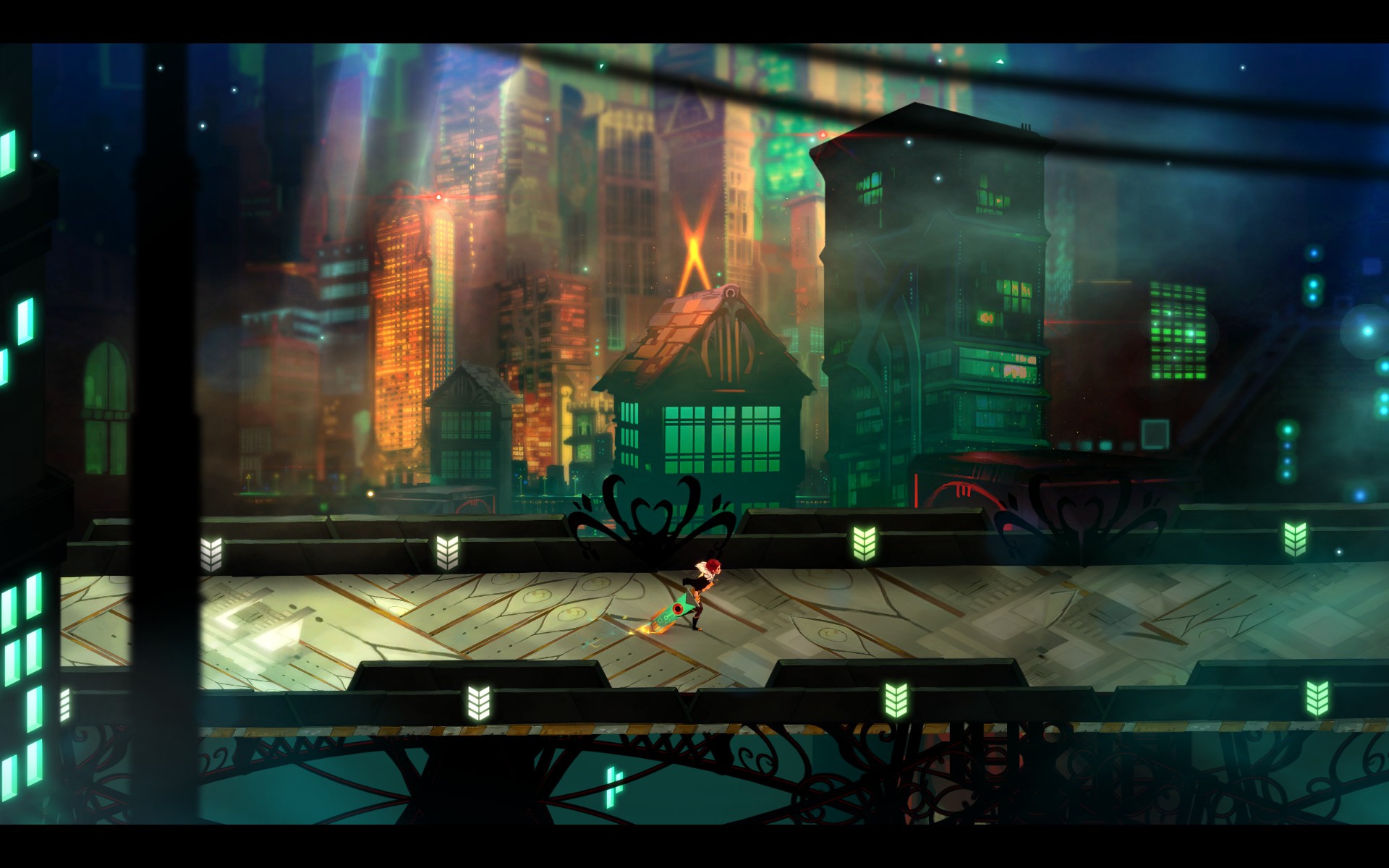 While Transistor is one of the most beautiful titles of this, and perhaps the last, generation, the combat falls apart in certain places and shines in other. Supergiant took a respectable risk in the overall combat of their game, granting the player the ability to hack-n-slash their way through enemies with Red’s powerful spells or pause the game and plan out attacks. On the plus side, this risky design breaks the monotony of regurgitated titles and gameplay. Unfortunately, it’s not always successful.

Transistor allows you to either treat the game like a typical hand-n-slash or turn it into a strategic turn-based title through pressing the right trigger and entering planning mode. Planning mode allows you to pause the game and piece together moves to create satisfying and effective skill combinations—combinations that grow even more customizable through a skill’s ability to be active, passive, or an upgrade; once in the skills menu, the player can apply skills as an actual attack, or stack skills together for certain effects. While these can create some fun new attacks, the skills menu itself can be difficult to figure out in terms of how it is laid out. 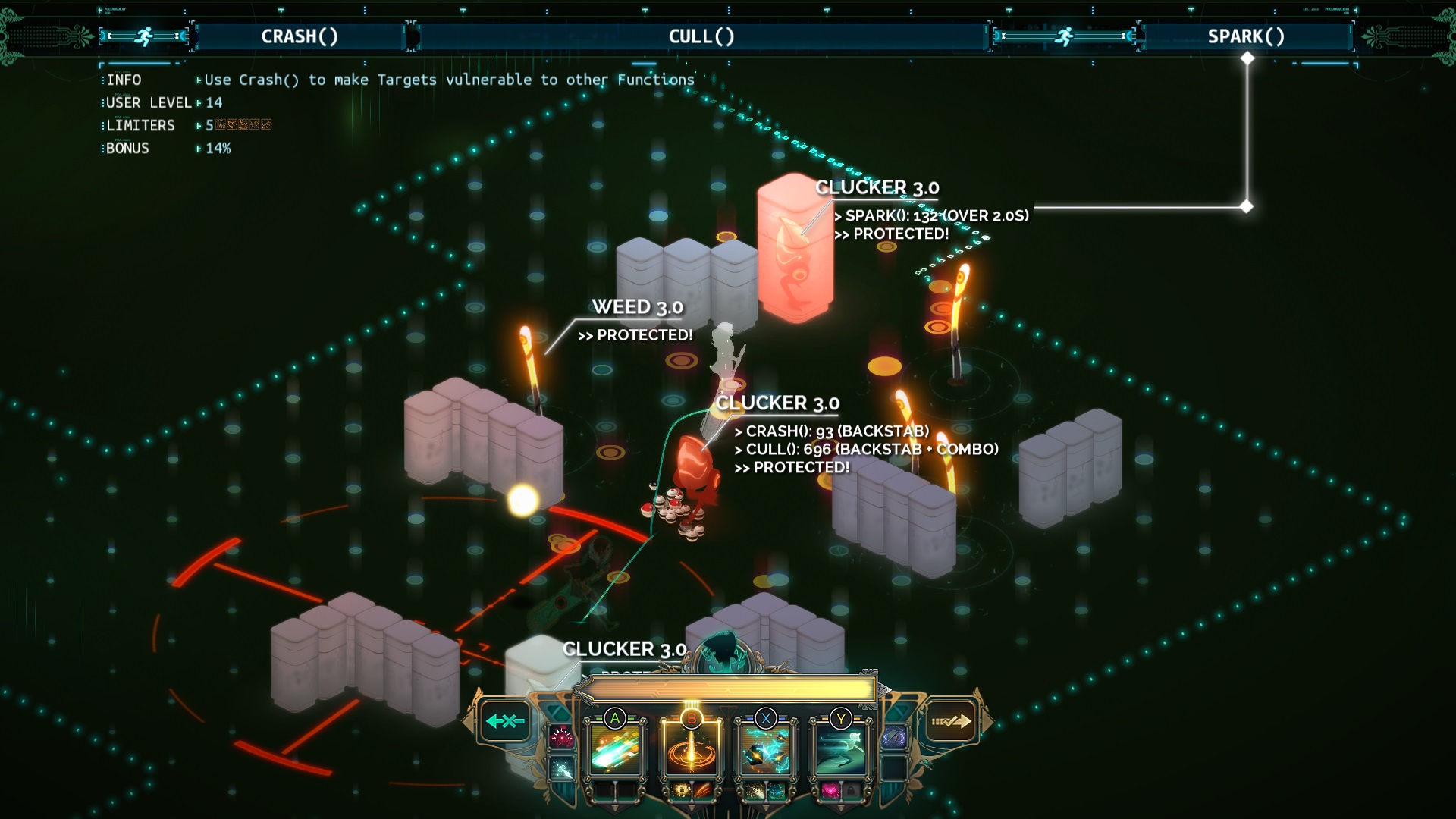 Planning mode adds a richness to Transistor’s combat that is absent in many modern AAA titles, and while it is largely satisfying, it can interrupt the flow of combat later on in the game. As Red progresses, combat and enemies become increasingly complex, an escalation that renders the hack-n-slash style combat outside of planning mode almost obsolete. More often than not, you’ll find yourself using planning mode, running around until the action bar reloads, and then using it once more. While fans of strategy games may enjoy this, those who are looking for a hack-n-slash title may grow bored or frustrated. Despite the minor issues with combat, Supergiant still succeeds in creating an overall refreshing system. The seemingly limitless manner in which skills can be customized create a plethora of situational approaches and if you lose all of your health, you don’t die, but are forced to continue without one of your skills—an aspect that forces the player to re-think their plan of action.

Overall, Transistor is a game that takes risks. But I think it’s important to realize that taking risks in game design is what we need to move the industry forward. Transistor is art; it is a short story of love and loss and humanity that begs for an empathetic interpretation from the player while also opening up through exploration and experimentation. It wants players to think rather than mash buttons. The stunning art and sound design mixed with a unique combat system keep it fresh, and the small subtleties of a home camp based on an island and fun skill tests give this short title a solid re-play value for an experience that can be enjoyed again and again.