The 2012 Brisbane Supanova has visited the RNA Showgrounds for another year, and once again there were mass crowds attending the event. Going by the sheer number of people who passed through the doors, most of Brisbane arrived to soak up the pop culture goodness on offer.

And boy, was there a lot of goodness.

The pop culture icons were out in force with the likes of Felicia Day, Billy West, Tom Felton and Morena Baccarin signing autographs and posing for photos. For those of us who grew up with the original 90210 on our screens, there was Luke Perry – nowadays known from his work on Jeremiah. The star signing area was always exceptionally busy, with an excited and extremely large line of people queuing for each of the guests.

Just as busy and rightfully so, was the artists area which is my favourite place to visit each year Supanova comes to town. Showcasing the amazing talents of local artists, this is the place to go if you want an amazing peice of original pop-culture inspired art to adorn your walls. There was a clear Supehero theme evident this year – no doubt spurred on by the commercial successes of films like The Avengers and The Dark Knight Rises. I myself grabbed some Avenger and Batman themed artwork which has already drawn comments from work colleagues. There’s always such a warm, inviting vibe to artist’s alley, and to see how passionate each and every artist and writer is about their work is truly a joy to behold. The best part about artist’s alley is that by buying artwork from these exhibitionists you are supporting their passion.With most pieces of artwork selling for $10 and signed by the artists, these are fantastic investments. If you attend Supanova but have never checked out artist’s alley, make sure it’s your first stop next time.

For anime fans, Madman Entertainment had a real presence at the expo – not only did they have their own store in the merchandise area, but they were also screening special showings of some of their upcoming releases. Having missed the screening of Paragon Lost – the Mass Effect anime featuring James Vega – when it was shown at EB Games Expo, I was keen to catch it at Supanova. I managed to see the Sunday sessions screening, and the Mass Effect fan in me squeed in joy – it was fantastic. The Madman Theatre was a great showcase for all things anime, and despite not being a huge anime fan myself, I enjoyed the time I spent taking a break within the theatre. The fact that the theatre itself was well set up with enough chairs to accommodate everyone, and a well positioned and sized screen helped make the theatre quite the crowd drawer.

The merchandise hall was equal parts wonder and heartbreak – wonder at the sheer amount of pop culture items on display, and heartbreak at the realisation of just how much money many spent within those walls. To say there was something for everyone there is a gross understatement. From comics to corsets, statues to posters, replica weapons to tshirts and mugs – if you were searching for anything pop cuture related you were guaranteed to find it within that hall. There was anime. There was video games. There were superheroes and super villians. Many of my friends spend the whole year saving up to buy items at Supanova, and seeing the range and variety of what was available I can understand why. This is, without a shadow of a doubt, the nirvana for pop culture collectors. 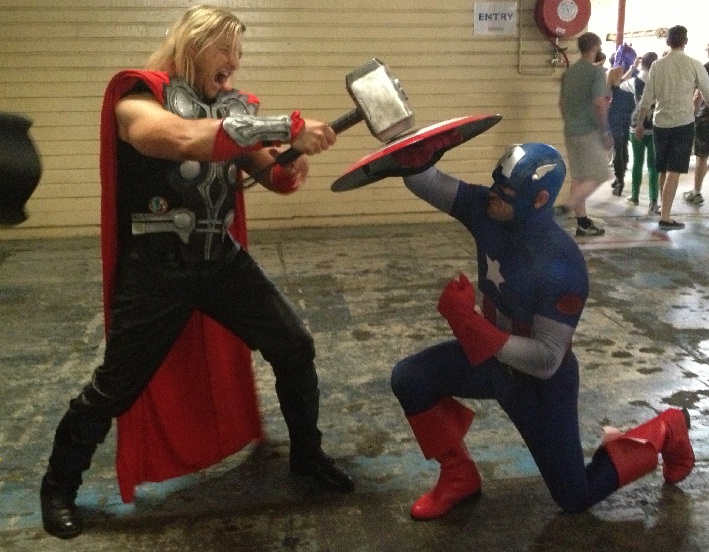 As with every Supanova, the cosplayers were out in force and they looked absolutely exceptional. The detail that was apparent in all the cosplays I saw was incredible, and it was clear much time and effort had been expended in crafting and creating these costumes. The variety of cosplays on display was amazing – the Avengers were all present and accounted for, as were other superheroes – Deadpool, Ms. Marvel, Powergirl and Supergirl. There was, of course, a huge Star Wars themed contingent, and characters from many video games were also in attendance. Two of my favourite cosplays were for Female Commander Shepard and Tali Zorah Vas Normandy – the detail that had gone into both these cosplays was exceptional. I also walked past several Slendermen, a few Borderlands 2 themed creations and even Link made an appearance. Not to be overlooked, there was an amazing Assassin’s Creed themed cosplay by The Vixen Gamer, who must have spent most of the day posing for photos.

It was a real joy to see so many spectacular cosplays in the one place, and it’s no lie to say that most of the magic of Supanova comes from the passion and dedication of those cosplayers who arrive dressed for the occasion. Where else are you able to walk past the Avengers posing for photos, rub shoulders with Slenderman and the Joker, and casually nod at The Doctor? The cosplayers bring a light and a joy to Supanova, and they do so for the love of doing what they do. So, from someone who has never cosplayed but is intrigued by the concept, a big thank you to everyone who came dressed in something special and made Supanova magical.

I can’t wait to see it all again next year for Supanova 2013.