During Brisbane Supanova 2012 I was lucky enough to spend some time with the very talented individuals who cosplayed the Avengers. I may have been slightly awestruck when the group’s Nick Fury agreed to answer a few questions I had about cosplaying, and what it takes to dedicate yourself to this very challenging yet very rewarding past-time.

Stags as he is known, has been attending Supanova since its very first one, in Sydney 2002. At Brisbane Supanova 2005 he wore his very first costume at a convention. He has cosplayed Mister Incredible (from The Incredibles Movie) and usually assembles his costume using clothes from previous costumes, as this keeps cost at a budget. Stags is mostly known for his various costumes of Homer Simpson.

What is it about cosplaying that made you decide ‘I want to do that!’?

The ability to be creative and the interaction with other cosplayers.

Do you enter competitions with your cosplays?

Occasionally I enter competitions. Only if I have a suitable costume that I think is good enough.

Talk us through the thought process behind choosing a character to cosplay.

The order can vary but it is usually in this order. Firstly, I need to know a bit about the character that I’m going to cosplay. I don’t cosplay characters I know nothing about. So usually I pick a character I already know. I then choose if the character appeals to me both in the costume design and the character’s personality, and decide whether I would actually want to cosplay as this character. I then decide if I should cosplay the character – for instance the costume might not suit my body shape, so it might be a costume better suited for a friend to attempt. Finally, I decide if I think I would be able to create the costume and if yes, then I try to assemble the costume.

What’s the hardest thing about cosplay in general?

Wearing the costume. I always have to compromise the look of the costume to make it more practical to wear. My costumes usually have some restriction of movement as well as being more heavy and hot to wear than everyday colthes. 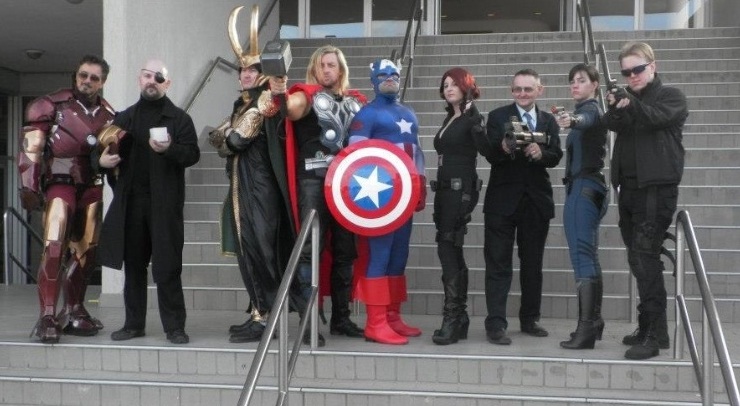 When it comes to group cosplays – how do you prepare? Do you choose a character first and then find a group or is it the other way around?

Usually I choose the character first.

Cosplaying as an individual gives me more choices of costumes to wear. Whereas in a group, I can interact with other cosplayers.

What’s been your a) favourite and b) most challenging cosplay?

Homer Simpson from the animation the Simpsons is my favourite because it’s the most popular. The most challenging is my Van Helsing from the movie Van Helsing because over the years, I’ve tried to improve the costume.

Many people say cosplay is not just about costume but about attitude as well. Is it imortant to embody the character you’re cosplaying in both attitude and physicality?

Any advice for just starting out cosplayers?

Not all cosplayers wear highly detailed and expensive costumes. If you are limited in skills and money, try to assemble a costume that uses some of the clothing you already own. Assemble the rest of the costume with clothes you are able to easily buy.

Thanks to stags for answering these questions, and thanks to all the cosplayers who shared their passion on the days of Supanova.