The Sims 3 – Save Game: University Life! 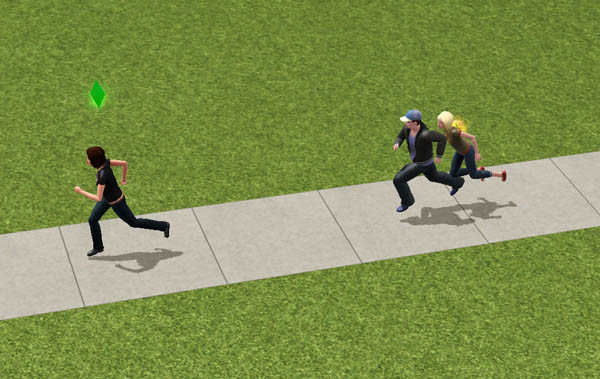 For those of you just joining this little adventure, the idea is this:  I made some Sims from our Save Game family here and popped them into a world with a ton of expansion packs so I could gleefully watch silliness ensue.  It’s been a treat.  You may remember that last time we left our Sims, they’d all enrolled in college, which I can only assume is totally natural for people who are about 30 years old.

The University Life expansion pack for The Sims 3 adds some interesting features to the game.  For example, there are new social groups that your sim can be a part of if they gain enough influence.  Granted there are only three groups: Jocks, Nerds, and Rebels meaning that your sim has to fall into one of these categories at some point, but it is an interesting system as you try to gain popularity and influence within your particular group.  Another feature that plays heavily into this is the use of social media and texting among your sims.  I like this for several reasons.  Not only can you show people funny videos of cats, which is a real-life past time of mine, but you can also simply text them to keep in touch with them.  Because who wants to talk on the phone? Not me, that’s for sure, Mom so stop calling. Geez.  Anyway.

To start off on our University Life adventure, Tash, Jen, and Joe made their way to the campus and settled into their dorm with a random group of roommates.  Like most first days at college, the school threw a sort of meet and greet where all the little college bound simmies could get together and chat and play fooseball and make some new friends to make brand new memories with. 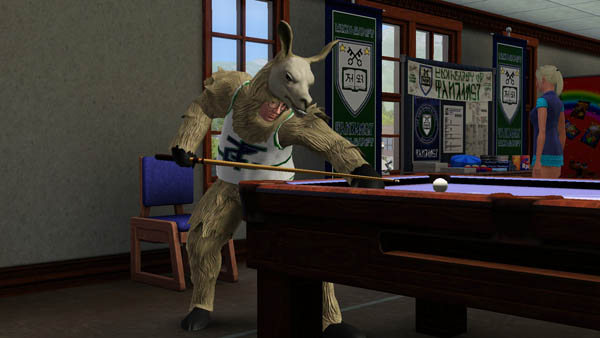 Naturally, all of our Sims took to this like ducks to water and made a million friends right off the bat.  Ha!  Just kidding.  Jen and Joe couldn’t be bothered to make other friends.  They played some juice pong and ignored the fact that there were other people in the room.  Because they’re social butterflies.  Meanwhile Tash flitted around the room and  became friends with everyone there right away. 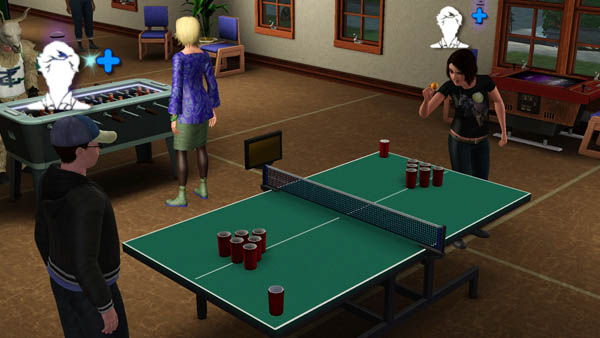 I don’t need friends. I have booze.

They did run into a couple familiar faces along the way.  Yes, because I’m crazy I also added a few of our fellow Save Game friends  Christine, Jeff, Griffon, and Adam to the game.  You may remember that they’ve written things for our site, and Christine is the wizard that keeps the site running smoothly (and also keeps Tash running smoothly when they’ve been up for 24 hours). 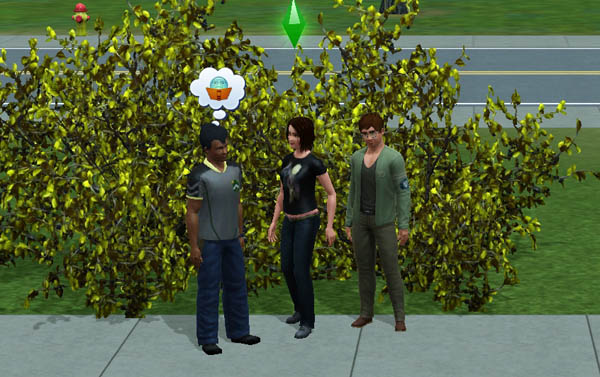 Adam can’t stop talking about studying and Jeff is wearing skinny jeans. What have I done? 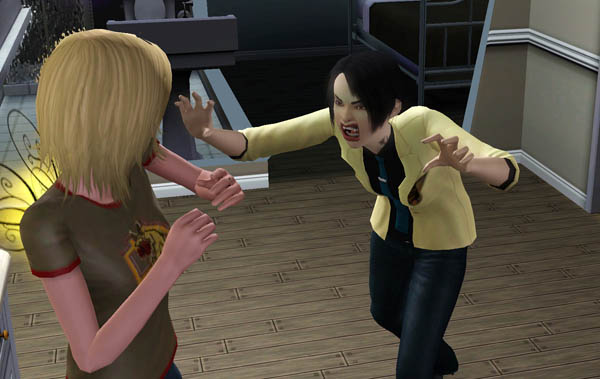 This is just how vampire Christine makes friends… I think. 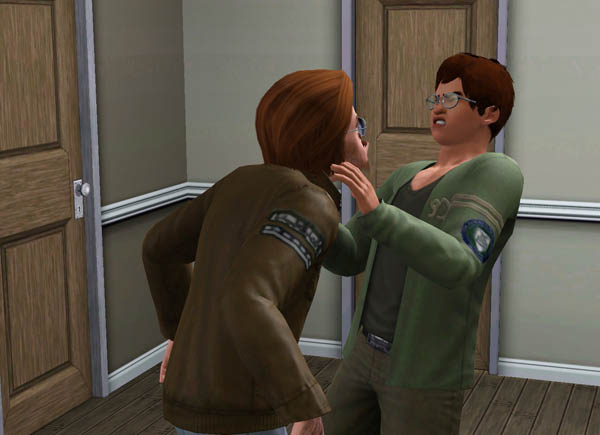 Oh my God, werewolf Griffon, you can’t just sniff people like that.

With friendships and awkward sniffing well under way, it occurred to our sims that college is definitely a place for studying and making the grade and figuring out how to be, like,  successful in life or something.  Tash seems to understand this part and I, as a player can’t get her to not go to class.  The woman is a saint.  She’s sucking up to professors, getting straight As and studying into the wee hours of the night, even through bouts of intense hunger. 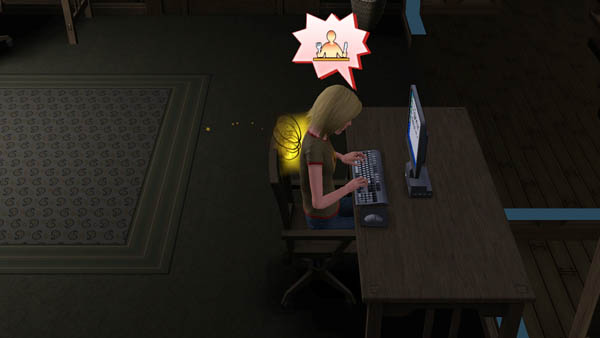 Maybe you should take a break.

It’s no surprise to me that Tash is the overachieving type.  She’s majoring in business and will also occasionally pull out a giant display with which to enlighten passersby on the virtues of working hard, earning your rewards, and being business savvy.  This does tend to make her sleepy though… 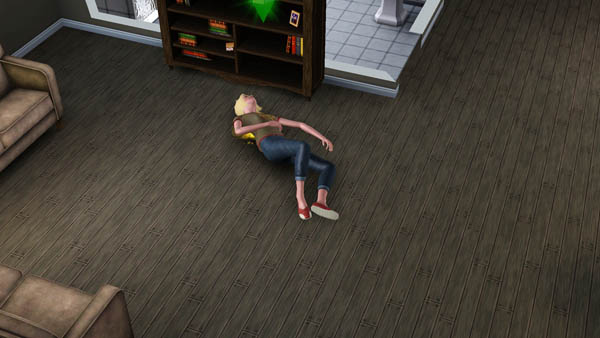 Told you to take a break.

Joe is doing well in his classes too, and on his off hours he is quickly climbing the ranks in the Nerd social group.  Playing video games, reading comic books and throwing down the gauntlet to others in nerdy trivia challenges, Joe has basically become King of the Nerds, a nerd to which all others look up.  Guy is a nerd machine. 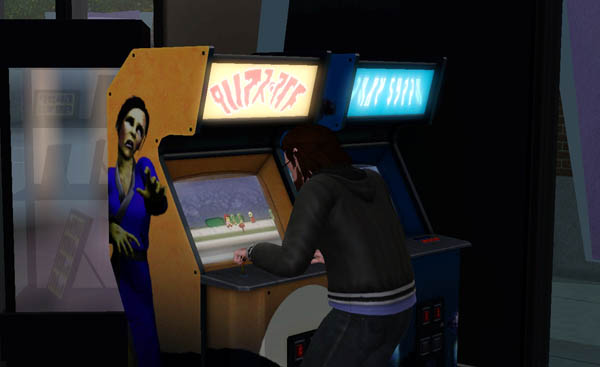 This is possibly the nerdiest werewolf ever.

And then there’s Jen.  She’s majoring in fine arts which means that when she’s actually going to class (which she’s not and I can’t make her), she’s doing so by sitting in a field and making art that doesn’t exist.  Her grades are slipping and I can’t even force her to to get out of bed most days unless it’s to play pool or go drinking.  The accuracy of this toon is terrifying. 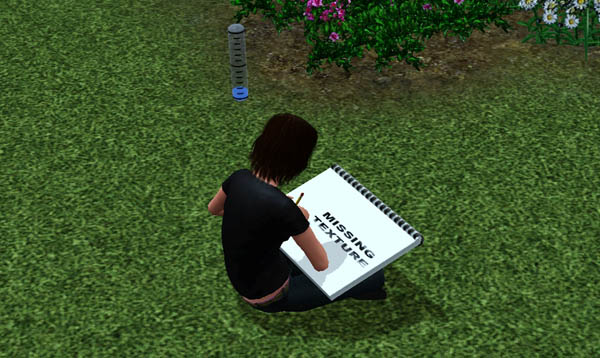 Like most college experiences, there will always be things to inspire life lessons through embarrassing mistakes and bad judgment calls.  It wouldn’t be college without some crippling regret regarding unacceptable social behavior.  So here’s a couple horrific examples of that now. 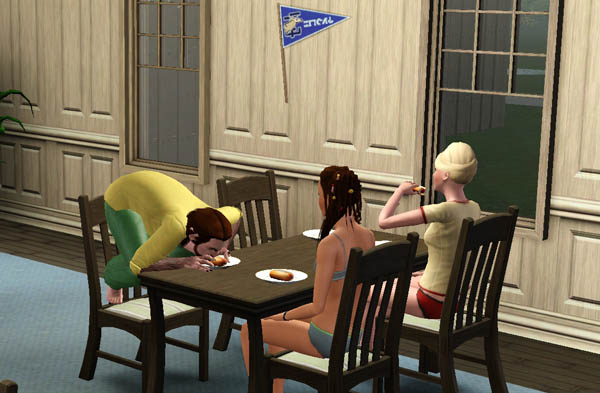 Joe’s roommates have the nerve to judge his table manners even though they’re eating in their underwear. Whatever, ladies. 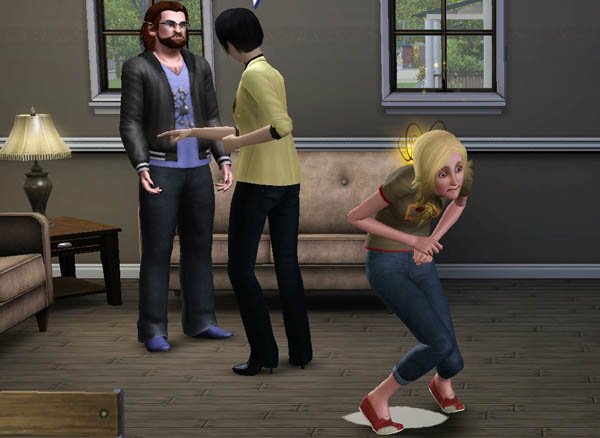 We made sure to rub her nose in it so it wouldn’t happen again. 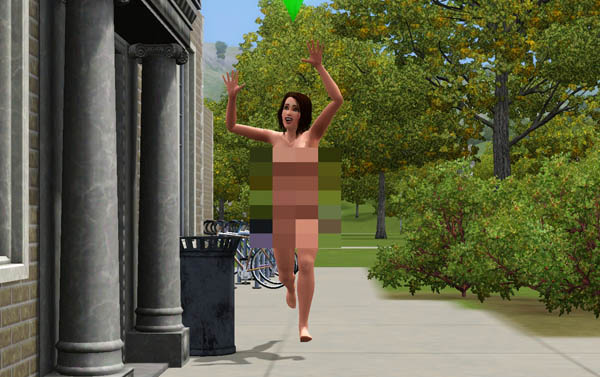 It won’t be long until our Sims are all grown up and trying to make their way in the world after their finals, which I’m assuming will be happening soon within the game.  As it turns out, doing well in University can help you later on in your Sims game climbing the career ladder of your choice.  So for the time being there is studying, streaking, nerding, arting, juice keg stands, and the follies of youth.  I’ll update soon with the outcome of all of this and then move on. After all, there are quite a lot of expansion packs to cover.  So with that, I leave you this: A picture of Jen looking confused on the toilet.  You’re welcome. And by “you’re welcome” I mean “I’m sorry.” 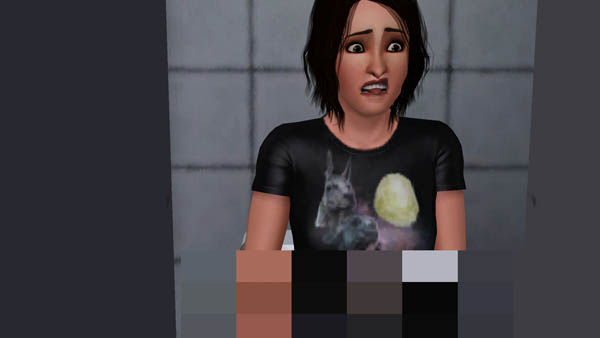