Why Does Call of Duty Continue to Sell So Well?

Call of Duty (COD)has become so widely renowned, that anybody on the streets will recognize the name, just as much as someone recognises the word ‘McDonalds’.  Back in 2003, critics and gamers alike raved about how amazing and realistic the first game was. It had gained universal acclaim, and surely this warranted a release for a sequel. After Call of Duty 2 received good reviews, it was just a matter of time before the third one was released, and then the fourth, fifth and so on. Call of Duty: Black Ops II marks the 9th game in the series, and it had grossed over $500 million in the first 24 hours of release, becoming the biggest entertainment launch of all time. The game also holds a 3.5 out of 10 (PC) user score on Metacritic. So, if people don’t like it, why do they keep buying it?

So why do people rush to buy the game, and then rush home to play it? Haven’t they seen user reviews? It’s the same thing over, and over again. Level up, get new weapons, kill the bad guys, increase your kill to death ratio and then prestige, only to do everything you just did, again. Everyone’s saying it’s bad, but they still get it anyway.  It’s because they’re curious. People like to decide for themselves, myself included. We’re hoping that the next entry will bring the franchise back to its roots… to what we loved so much about the earlier entries. I bought Black Ops II at launch, and I loved it for the first two weeks. Now, I just think it’s okay. Once the initial excitement of a new Call of Duty game has passed, there’s not much left to it.

Critics love the franchise, regular gamers do not. What’s the deal with that? The critic and the gamer look at it with two different mindsets. Graphically, the latest game in the series may not be on par with Battlefield 3 or any other game released recently, but it is still visually appealing. Critics appreciate how fluid the animation is, how emotionally engaging the characters are and how well they deliver their lines. Looking at franchise technically, one cannot argue that Call of Duty has amazing production value, with each game being made by extremely talented and experienced industry professionals. Take one look at a review which highlights any of these points, and that may be enough for the reader to buy the game, but as someone who just wants to have fun and experience something new and intuitive, they’re going to be sorely disappointed.  Unfortunately, they won’t realise this until after they’re purchased the game, because the review they read convinced them to. 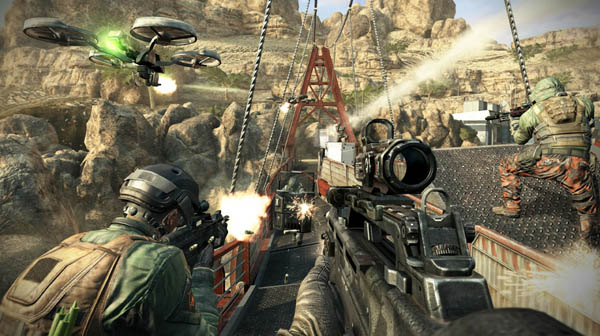 Call of Duty usually releases late October/early November… just before Christmas. Parent’s looking to get their teenage child a game as a present, is going to have Call of Duty imprinted into their brain. It’s going to be their first choice when deciding what to get. So much money has been poured into marketing the franchise that anywhere an unaware mother or father turns, they’re going to see Call of Duty. There’s another million sales right there. People  have now gotten the game for Christmas. These teens are going to want all their friends in their circle to get the game so they can play together. It’s not as much fun if you’re playing alone.

What do Sam Worthington, Jonah Hill, Kobe Bryant and Jimmy Kimmel all have in common? Well, for starters, they have all endorsed the franchise. These celebrities have all appeared in a Call of Duty commercial. Someone has had to have watched the ‘The Vet & The n00b’ trailer for Modern Warfare 3 and said to themselves; “That’s Seth from Superbad! This game must be good!” Even Academy Award winner Hans Zimmer has been involved in the series, composing the soundtrack for Modern Warfare 2. In the general population’s eyes, if it’s that big, it has to be good.

So, now we know a game doesn’t necessarily have to be good to sell, and one of the franchises’ biggest selling points is simple. The fact the franchise is called Call of Duty is enough to warrant millions of sales.

So COD isn’t generally well received, but with millions of dollars being poured into its marketing campaign, celebrities who endorse it and industry professionals who craft an engaging and immersive cinematic experience, Call of Duty is a hit, and always will be.