David Gaider Speaks to Save Game on the new comic Dragon Age: The Silent Grove #1 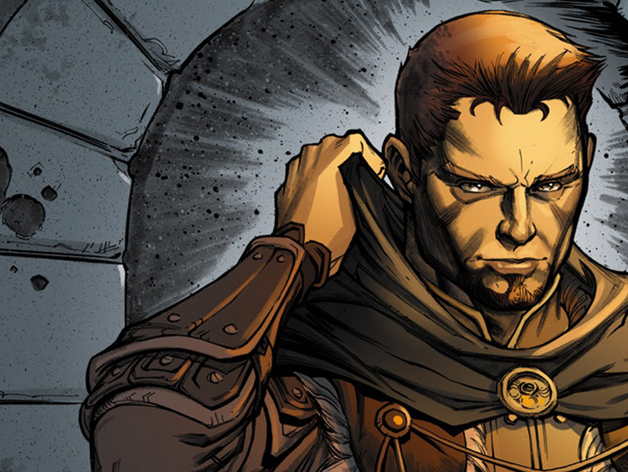 Dragon Age lead writer David Gaider was kind enough to give Save Game the scoop on Dragon Age: The Silent Grove #1, which was released through Dark Horse Comics earlier today.  The story follows a few familiar faces from the Dragon Age games and introduces us to a couple new ones against the mysterious backdrop of Antiva City.

Save Game: I just read Dragon Age: The Silent Grove #1 and it’s fantastic. The story features Alistair, Varric and Isabela, characters from the first two video games. What made you decide to team those particular characters together for a story?

David Gaider: Whimsy, at least in part. I really enjoy those characters, and getting to write them is like going home again. The other part is that they still have things to explore, and issues left unresolved… things we might never be able to do in the games, so this is a treat.

SG: I’ve always been curious about the city of Antiva. What made you decide to set this story there? What do you love about Antiva?

DG: One of the benefits of a comic is you get to go to different places far more easily. In a game, any location requires massive effort on the tileset and modeling, but in a comic you can draw any location you like. So if I want to take the story to Antiva, off we go. Antiva has the same kind of sense to me as the Italian city-states during the Middle Ages, the same mixture of cultured veneer and vicious in-fighting, which I find really interesting. The entire story in the comic doesn’t remain in Antiva City for long, but it’s nice even to visit.

SG: Your novel, Dragon Age: Asunder, which was released in December has a story that takes place between Dragon Age II and this first issue of the comic, correct? And the story in the comic takes place a full decade after the end of the blight in Dragon Age: Origins. That’s quite a span of years. How is this world different now from the one we knew in Origins and Dragon age II? What’s been happening in Thedas?

DG: The Asunder novel took place two years after the end of Dragon Age II (roughly contemporary to the time when Varric was being interrogated by Cassandra), so the world of Thedas is as Varric described it: chaos has ensued after the breakdown of the Chantry and the rebellion of both the templars and the mages. The events of the comic take place after the end of Dragon Age II, but don’t really tie into Asunder (and, in the timeline, occur previous to that). So in the comic, the rebellion hasn’t erupted across Thedas just yet.

SG: At the end of Dragon Age II we definitely got the sense that something big was looming on the horizon. Will the comic shed a little more light on what that might be?

DG: Not really, no. That’s more Asunder’s job. The comic is an earlier tale that explores a mystery important to Dragon Age lore, but doesn’t really touch on the mages and templers—which I’m fine with. Not everything has to be about the mages and templars, after all. 🙂

SG: What are the roles of the Warden and the Champion in this set world of the novels and comics?

DG: They exist, and the actions of the games exist, but we can’t reference those characters in more than generalities. Most players are fine with us setting down some canon for the sake of the novels and comics (which can’t react to player choice, after all), but far less players would be okay with us setting down any type of canon regarding their player characters from the games. So it’s a rule that we can’t refer to the Warden’s and Champion’s gender, for instance, or even get into too many specifics about what became of them. Which is too bad, but I’d rather write around that fact that enrage fans unintentionally.

SG: In Asunder we got to see a few of the characters from Origins: Wynne, Shale, Leliana. Aside from the characters we’ve already seen, can we expect to see more familiar faces in upcoming issues?

DG: Maybe later on in the series. There’s a lot going on for these characters specifically—you don’t want to use the limited space you have for cameos which, while they might be fun fan-service, would make the story secondary. But there will be plenty of things which fans will appreciate, I’m certain.

SG: One new face that we get to see in this first issue is Claudio. He seems like an interesting fellow and very mysterious. Can you tell us a little about him? Does he have a further part to play in this story?

DG: He’s an Antivan Prince (which is sort of like a German Prince, in that you can’t swing a dead cat in Antiva without hitting one) who is also part of the Crows—the guild of assassins which all but rules in Antiva. Royalty in the guild is nothing new, and in fact royalty who aren’t in the guild probably have far less real power. But, yes, we’ll hear more from Claudio later.

SG: When we spoke back in October you mentioned there being a Witch of the Wilds in this story. Can you tell us a little more about this daughter of Flemeth and how she relates to Alistair’s quest?

DG:  Nope. You’ll have to keep reading for that. 🙂

SG: Speaking of Flemeth, what has she been up to this whole time? Are we going to see any of her influence, or perhaps herself in the upcoming issues?

DG:  Her influence is definitely a factor, and you’ll definitely learn more about her plans. More than that I will not say.

SG:  In light of your love of angsty, bittersweet, emotionally beautiful kind of storytelling, should we readers be bracing ourselves for more delicious emotional ups and downs in the story? I for one, sure hope so.

DG:  I think the tone in the first issue is a good indicator of the rest of this series—Alistair is not out on a lark, he’s chasing after something which could leave him in a pretty emotional place. So, yes, I’d say that’s a good bet. Particularly when I’m involved.

SG: Hypothetically speaking, if there were hypothetically going to be a third Dragon Age game, how would you describe these stories, particularly the Silent Grove comics to come into play for that?….Hypothetically.

DG:  If there were a third Dragon Age game, the ideal thing would be to have these tie-ins actually add more context to that tale—the same as reading the first two Dragon Age novels added context to the Dragon Age: Origins without being required. More than that, I really cannot say.

SG:  Where will we find our friends Alistair, Varric and Isabela in the next issue?

Dragon Age: The Silent Grove #1 is available now and can be purchased here from Dark Horse for .99.  The six part series will be released exclusively there and we’ll be sure to keep you all updated on it.  Enjoy the first issue.  I definitely did.