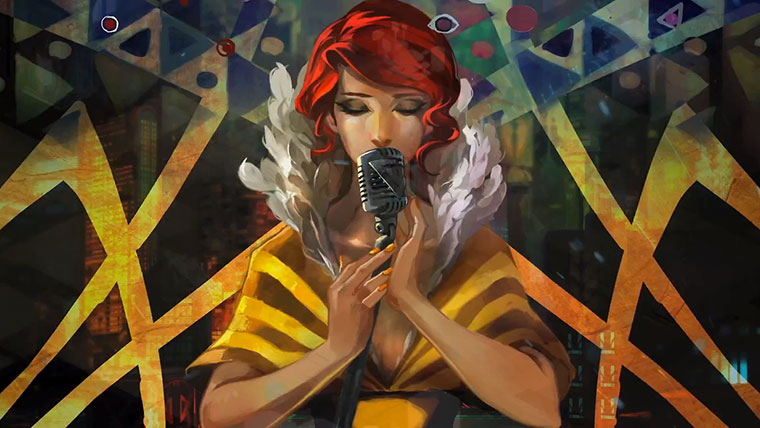 Following Transistor’s new build at PAX Prime, Katy Goodman and Robyn Miller talk with audio director Darren Korb about music in games, inspiration, and are even joined by a special guest. You can read the first part of their interview here.

Katy: You are also part of a band called Control Group, correct?

Katy: Can you tell us a bit about it?

Darren: Yeah sure! It’s a three-piece, with this guy name Jeremy Parker from Haramonix. I met him through doing Rock Band related stuff. A friend that he went to college with, Evan Reynolds, all of us have been in a bunch of bands before. Oh, hang-on, my dog is going insane right now. He’s like rolling over and all of this stuff.

Darren: Where were we? Control Group! We’ve been playing a bunch of shows—we’ve been going up to Boston a lot for the Boston festival for indie games. It was awesome. The VGO (Video Game Orchestra) came in and I got to play a couple songs from Bastion with them, which was really fun. We’re still playing and have an EP coming out soon and a vinyl single.

Darren: Thanks, yeah, it’s a lot of fun. Oh wait! He is here! *refers to dog, who he brings in front of the camera*. 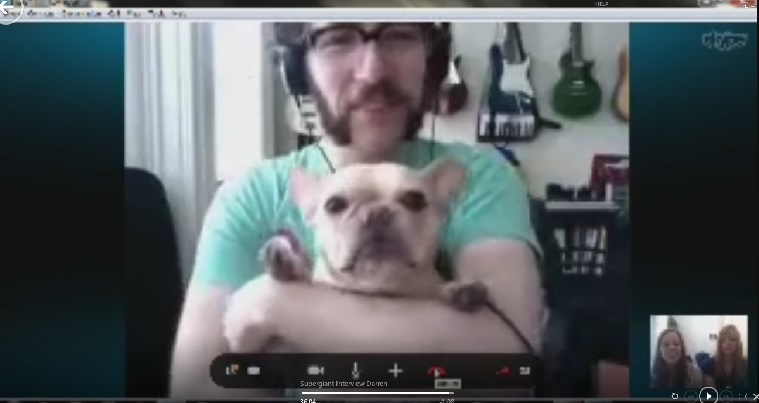 Katy: So you’re the inspiration behind all the music, Higgins!

Robyn: He is the muse.

*Darren puts Higgins back down*

Katy: Higgins, I’m so excited that we got to meet you. Maybe next time we should interview him.

So what kind of music does Control Group normally play?

Darren: It is rock music that is reminiscent of 90’s garage rock.

Katy: And the EP is coming out in a couple months?

Darren: Yeah we have a little EP we’re going to release son, and we have a vinyl single that we have in our band camp right now.

Darren: Yeah, controlgroupmusic.com and then we have a bandcamp with all of our stuf on there.

Katy: So do you take anything from Control Group and put it into the music for the games that you make?

Darren: I haven’t yet. We started playing after Bastion had come out, or around that time. So we’ve been jamming ever since. We really just started performing this year. But yeah there hasn’t been a ton of crossover. It’s sort of a different outlet for me.

Darren: They’re just pretty different animals. It’s like a whole other thing. Making music for a game… I mean at least in the way I have done it, it’s very free to some degree. There is a lot that it needs to accomplish, so in some regards there are a lot of constraints. But in terms of what I want the music to sound like, it’s pretty free. I really enjoy that because I get to do whatever it is my whim tells me to do. In that way, it’s sort of like playing in a band. Especially with this band, we do whatever feels good and write together and quickly, so it just works and it’s pretty free. There are obviously different constraints there, being a three-piece band, we’re limited to those three instruments and that’s it, whereas in the studio you can do whatever you want and have any instrument available to you all playing together at the same time.

Katy: And you did the sound effects for Bastion and Transistor as well, right? I’m always fascinated by how sound effects are made—what were some of the coolest effects that you’ve created so far and what did you use to create them?

Darren: For Bastion I was thrown right into the deep end, because I had never done sound effects before. So I did it however I could; I used sample library sounds and combined them with other sounds. Sometimes I would just record mouth noises into a microphone and process them. One of my favorite ones is the Rattletail, from Bastion. All of his sounds I did with my mouth, just creating random monster sounds. Also in Bastion, if I needed to improve a sound I would just mix in catapults with it and it would instantly become more awesome. I think with Transistor, wind chimes will become the new catapults. 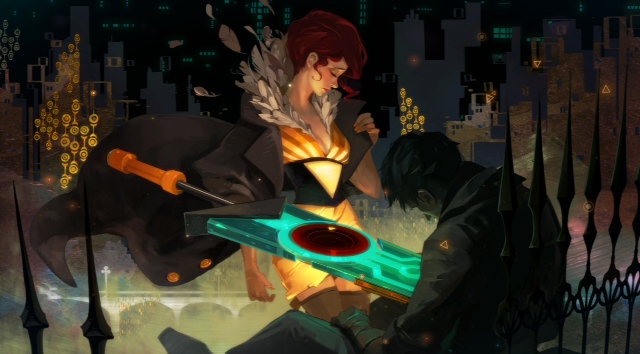 Robyn: Or catapults. If you could compose music for any video game series, which would it be?

Robyn: I would hate to play you at Rockband. I imagine you’re a beast at it.

Darren: I did win the 2010 national Rockband championship.

Katy: I mean, not to brag or anything. *laughs* It’s funny because games like that normally don’t transfer over in terms of skill. I played soccer through college but when it comes to Fifa I pretty much fail at life.

Darren: Yeah sure, there isn’t any correlation there at all. But Rockband.

Katy: This is a bit more of a broad question, but what do you think music can bring to games, especially coming into next gen? We’ve a huge increase in the popularity of game music, from the growth of performances from Video Games Live, the Zelda Symphony, things like that. They’re becoming almost like moving soundtracks.

Darren: I think music helps define the tone of a game. It allows the player to feel a particular emotion. And then that’s my approach to it as well—I try to reinforce the tone as much as possible to enhance and help the storytelling and elevate the emotional assets as much as possible.

Katy: It’s like an emotional catalyst. It’s amazing, because when you look back at the nostalgia of older games from our generation, so much of it is recalled through the sounds of them.

Robyn: So what sort of music do you normally listen to when you’re not making your own?

Darren: Well right now, that band I mentioned earlier, Polica, they are really cool. I really like the The Belle Brigade, I’m actually seeing them live soon. Phoenix is great, and that new Paramore record just came out. I just found this new record of just the vocals from the Beatles at Abbey Road, and it’s mind-blowing. Because these guys are so good, it’s crazy.

Robyn: What’s your next professional or personal project?

Katy: That’s a big project in itself.

Darren: Yeah, that’s my next personal project. It’s going to be a long running project of mine. And we’re expecting to be finalizing Transistor right around the same time.

Katy: Perfect timing! Going from no sleep, to no sleep. At least you’ll be used to not sleeping.

Darren: Yeah, this is totally normal. I got this. Whatever.

Katy: And when is the estimated release for Transistor?

Darren: Sometime early next year, I think. The first part of next year, depending on how you define part.

Katy: And will the soundtrack be released around the same time?

Darren: Yeah, that’s the idea. Sometime around the release, either at the same time or a little bit after.

Robyn: Will you be planning to bundle it with the music sheets like you did with Bastion?

Darren: Probably, though that will most likely come a little later. There is a lot more actual played content here and less looping of music, so if people are interested I’ll try to do it again.

Robyn: That little snippet of “We All Become” is amazing. I’ve been listening to it since March.

Katy: The hotel room at E3! She introduced it to me and we just listened to it on loop.

As we wrapped up our interview, the lovely Higgins graced us with his presence once more, staring with the utmost of elegance, an endorsement of his wrinkled French Bulldog face. He should be the cover art for Transistor’s soundtrack.

Supergiant Game’s Transistor (and its accompanying soundtrack) will be available in early 2014. Until then, you can go check out what Darren is up to with his band, Control Group.