It’s difficult for the larger cons to create a shared sense of community and togetherness. Sure, the majority of attendees are all there for the same reasons, but this doesn’t mean those attendees feel a sense of belongingness or community spirit. The often quoted saying that you can feel the most intense lonliness when you’re standing as part of a crowd rings true here – it’s damn tough to create a sense of shared passion. And yet, with what I witnessed and felt as an attendee at PAX Australia 2014, one thing was abundantly clear – PAX Australia didn’t just create a sense of community togetherness, it infused this feeling into every single event, every panel, every area that was part of the show. And damn, what an amazing show it was.

I’ll be honest – I ventured onto the show floor on Day 1 of PAX Australia feeling equal parts trepidation and slight hesitation. I was concerned that PAX would be overshadowed by the spectre of the recent talk surrounding ethics in videogames journalism. As a female in the games industry an as a panelist at PAX Australia I felt like there were two targets on my back. In the lead up to PAX Australia, I keenly felt the simmering mood of tension within the wider games community that seemed set to boil over at any time. It felt as though the industry was on a knife-edge, and I was worried PAX Australia was going to be the event that brought everything to breaking point.

I shouldn’t have been worried at all.

The show floor itself was spectacular. From the games on display to the developers in attendance to the attendees sampling everything on offer – PAX Australia showcased the very best in the Australian Games Industry. The talent on display in the Indie Showcase was unbelievable. Walking through the booths, trying out the games and seeing the excitement and pride in the eyes of the developers was like a booster shot in the arm, re-stoking my enthusiasm and my own pride in the industry. Whilst speaking to international guests here for the show, they mentioned that the level of creativity, innovation and uniqueness showcased in all the indie games on display was something that was sorely missing from games industries of other countries. And anyone who walked through the Indie Showcase and played the games there would know the calibre of indie developer talent we have here in Australia. What an absolutely exciting time to be part of the industry, not just creating the games, but covering them and playing them.

But the talent didn’t stop at the Indie Showcase. The big hitters of the industry were also in attendance, with Xbox, Wargaming, Ubisoft, Nintendo, Bethesda, 2K Games and Warner Brothers all displaying the hottest games available or coming soon for their companies. Walking through these booths, the mood was electric, energising and completely enthralling. Attendees were lining up for their chance to go hands on with the Triple A titles, and whilst numerous titles were already out, the mood was still one of community passion, of taking pleasure in a shared hobby. There were no negative displays of overt non-inclusiveness or catcalls of “fake gamer”. Everyone was simply enjoying being a part of a community event that was well managed, well organised and wonderfully executed.

This sense of community inclusiveness continued in the panels. With a variety of topics and theatres that catered to hundreds more audience seats than the theatres in the previous location had, the panels were both popular and entertaining. Whilst I admit to my own bias being a panelist myself, I also must admit that the experience I had as a panelist was one I will remember fondly and cherish always. My panelists were amazing, our audience was superb and our panel’s enforcer staffmembers ensured our panel ran without any glitches at all. Our ‘For the Love of Gaming’ Panel was a whole bunch of fun to be a part of, and after how well it was received, I admit to feeling rather silly that I had ever even remotely entertained the thought that something untoward might happen. I had previously felt like I had two targets on my back, but instead, being a PAX attendee, I felt a sense of community inclusiveness that had been missing in all the prior conventions I had attended. 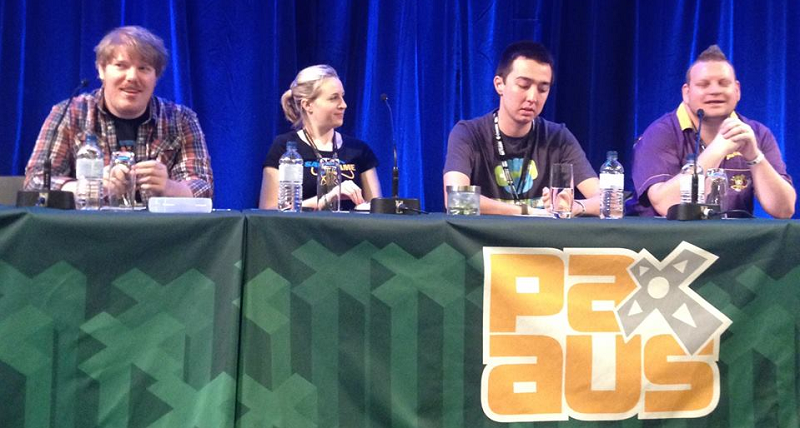 In addition to holding several theatres, the upper floors of PAX Australia also included both the Diversity Lounge and the EA Games Community Lounge. During the times I visited, both areas were packed, and both were filled with people excited to share their gaming passions with others. The mood in both these areas could only be described as positive, excited, invigorated and inclusive. For me, the EA Games Community Lounge showcased a game that is my most anticipated – Dragon Age Inquisition. However, in the Diversity Lounge I found a game – Never Alone – that was the highlight of the show for me. But more on Never Alone in our impressions article to be published soon.

One of the areas that is always a highlight for many attendees is the tabletop area, handheld lounge and console freeplay areas. Prior to PAX Australia opening the first day, I spent a quick five minutes walking these areas, appreciating the quiet before the tidal wave of people inundated them. Whilst it was peaceful to see the area this way, it was also odd – as though the space was unfinished, like it was not living up to its potential. Upon visiting the area later during the thick of the second day of PAX Australia, this discordant feeling was gone, replaced with the same sense of shared enjoyment and community inclusiveness that permeated the whole of the convention. It was wonderful to see the enjoyment on everyone’s faces, from attendees who were spending time with their friends in the handheld area to teenagers who had brought their parents to the tabletop area, and families who were reliving gaming memories together in the classic games area. Everywhere I looked, there were examples of all the positive aspects of gaming on display, and I was reminded of how at their heart, games bring people together, rather than pull them apart.

As an attendee at PAX Australia who arrived feeling burnt out and left feeling re-energised and re-invigorated, I would like to thank with all my heart the organisers of the event – all those individuals involved in creating an event that was inclusive and positive and completely rewarding in every way. To Yug and all the Enforcers and organisers who worked tirelessly behind the scenes – thankyou for all that you did. To all the staff at every one of the booths who helped attendees and media and made the experience enjoyable – thankyou for your efforts. To the developers and publishers and PR staff who gave all their time and energy to create games and make the event memorable for all the right reasons – thank you for your passion and your creativity. To the venue staff who worked across the three days – thankyou for your patience. To all the people who dedicated time and effort into PAX Australia 2014 – thank you for being a part of what was the best convention I have been to.

And to all my fellow attendees of PAX Australia – whether media or exhibitors, pass holders or staff – thank you for making the event feel like HOME.