The golden age of Theme Hospital, Rollercoaster Tycoon and Pharaoh 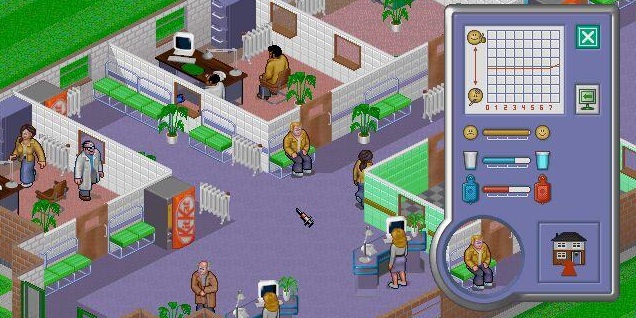 There is something missing from the line of gaming genres of today. One that slipped away at the end of the 90’s when the Unreal engine became big, and the rise of the first-person shooter began its cover-based grip on the games industry. Before Mass Effect and Dragon Age, when everyone would hook up computers and play Baldur’s Gate II until the sun rose. There is a genre that became neglected.

‘Construction and management simulation video game’ is the name Wikipedia bestows upon this genre. Sounds a little like meddling with Microsoft Excel, but that’s because it was, in a way. Only you could minimise the numbers tab. With typically two-dimensional isometric views, copious windows, cartoony graphics and a giant sandbox with which to build anything from a theme park to a fully-functioning city on the Nile, these simulation games were what made PC gaming in the 90’s.

I remember sobbing until I was near inconsolable when my father refused to let the guy setting up our family computer install Doom, but within the next few weeks, as I cracked the password to the computer by glancing at the post-it to the right of the monitor, I found myself a new love: Theme Hospital. This cartoonish take on the health system by Bullfrog Productions was nothing short of brilliant. You were simply given an empty office space of varying size, and an expectation that within a minute you’d have the GP’s office mapped out with a doctor waiting, a reception, and possibly a general diagnosis room. The front half of your hospital would be constructed.

From there, you were given even more options. Wards, a room dedicated to curing patients with the infamous “Bloated Head” syndrome, psychiatry, and chemist. By the end of each level you would have a giant hospital with tons of staff. And hiring staff would be a joy. You’d find a receptionist whose pastime would be fart-surfing, or a cleaner who smelt faintly of cabbage. Their reliability in the job would determine how fast they’d walk around your hospital doing their hilariously menial tasks, everything from popping people’s heads, blowing them like balloons in an effort to return them to their normal size, to telling a guy who thinks he’s Elvis that he isn’t actually Elvis.

Suffice to say, I spent hours building hospitals. The numbers would come in and with taking out bank loans to extend the hospital, and balancing the books by making money from curing patients, I  only got to level four of the game. I was a surprisingly bad hospital manager. When an emergency would come in and five patients would be loaded off a helicopter with some amusingly worded ailment, I’d simply hire five doctors on the spot and hope they’d run to the extra rooms I’d made specifically for the disease. And my gosh, the amount of bloody cleaners that want a raise. Then again, the amount of soda cans and vomit that lay strewn around my dirty hospitals would make Oscar the Grouch blush. Usually I’d pay up and then go back to my typical routine of lining the walls of the hospital in too many vending machines and breakable chairs. 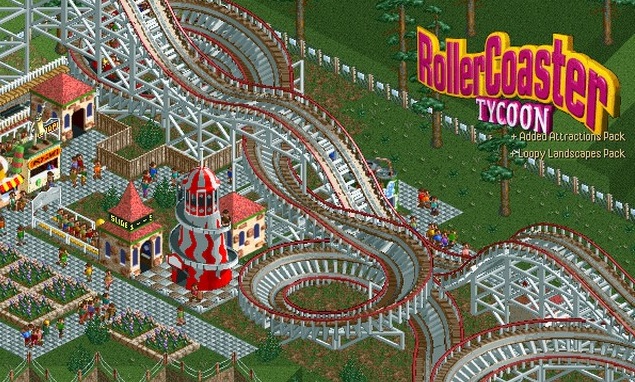 There were other games that were successful construction sims too. Everyone remembers the fun of watching money float away in Rollercoaster Tycoon. Building giant corkscrew rollercoasters, smiling in glee, only for that smile to fade as you fail to build enough inertia and the riders get stuck on the second loop of your monstrosity. Or perhaps being a voyeur and reading the depressingly honest thoughts of guests to your amusement park and moving the people in panda costumes next to them in hope to cheer them up.

I must say, that scream of joy from park guests as they take on the huge plunge in the log water ride is seared into my memory. It’s like the Wilhelm scream of gaming. I’m sure I’ve heard it recycled in other games too. I had more success with Rollercoaster Tycoon, if anything because most theme parks were half-built before my zealous hands scoured the bank balances to build ridiculous freeform coasters and one too many information kiosks for guests complaining they were lost on a remarkably linear wide path.

I guess the fun comes with the deep feeling of achievement we all get from building something intricate. Like erecting a tower out of Lego, surveying a theme park that could only rival Disneyland in scope excited the little kid in all of us. Rollercoaster Tycoon caught that deep sense of giddiness when one first gets a ticket to MovieWorld and spots the Lethal Weapon ride.

Of course, there were construction and management sims with a very serious tone too. The much-lauded Simcity series is a testament to that. I won’t go into much detail on those ones, except to say that they were some of the closest games you’ll get to actual city planning.

However, a game that stood out for me was Pharaoh. This sim tasked you, as a Pharaoh, with building your family history through the generations. You could watch your civilisation through decades from just a footpath in the swamp to a fully tiled expanse of something comparable with the Roman Empire. And throughout, you could spend game years constructing your pyramid. It was one of the most intricate games I’ve ever had the pleasure to play. Pharaoh seemed steeped in Egyptian history: there were the Nile floods to worry about, plagues, storage of food, trade, economy, military might to ward off opponents, entertaining the city people, and making sure the pockets of poverty around your city were being attended to so those poor struggling souls could get a leg up. I spent hours on Pharaoh, and I know there were others in that series. Sadly I didn’t get to playing them. But the Egyptian family lives on in our first ever PC, which is gathering dust underneath an unused desk.

What happened to all these sim games? Well, I’m not sure. EA acquired Maxis, the creators of SimCity, and Bullfrog, the creators of the ‘Theme’ series. I think mismanagement caused the games to lessen in quality. I remember playing the 3D version of Theme Park and, while it was fun, it lacked the scale of its 2D predecessor. SimCity is still around, although it’s had quite a few bad incarnations after SimCity 4. Here’s hoping next year’s overhaul of the SimCity franchise won’t be another sad grasping at straws.

And Pharaoh? Vivendi Universal closed the doors on the development studio, Impressions Games, to cut costs.

I believe the golden age of construction and management sims are behind us. We gamers have tired of rollercoasters and managing Egyptian cities. We got over seeing the likes of Bloated Head or kids vomiting after spending too long on the merry-go-rounds. More people are interested in more multiplayer and story-driven games. Considering the last Age of Empires was a free-to-play MMO attempt at Age of Empires, I hesitate to think what the future might hold for even the strategy game cousins of these sims.

There’s always the intriguing Anno 2070 kicking around on Steam. I might give that a go. And for anyone wanting to check these awesome city-building sims out, most of them are available for cheap on GoG.