Uphill Both Ways and All That Crap 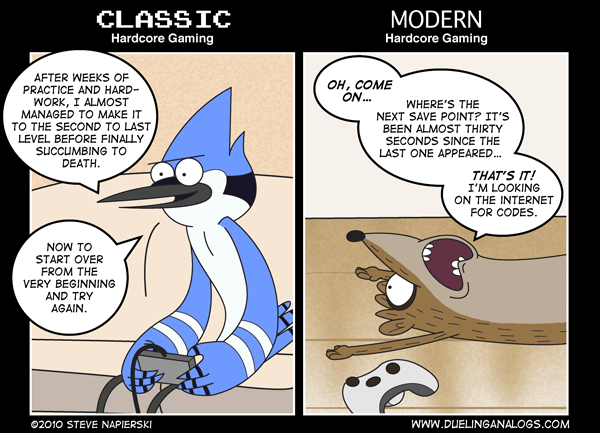 I’m old.  Not old old, not puttering around with cane, gumming oatmeal old.  Not even close.  In real life I’m still a relatively young person or can at least pass for one (sometimes I even still get carded!).  This is not the case in the gaming world.  Oftentimes I feel like a relic of days gone by.  I started playing video games when all they could do was one thing and the controller had two buttons – two buttons!  I’m not complaining.  I’ve been lucky enough to watch the last 20 or so years of gaming evolution and to be a part of it.  It has gone some amazing places that continue to wow me.

Early games are special.  I cannot profess my love enough for the classic games of NES.  They all hold a special place in my little gaming heart.  Games like Bubble Bobble, Super Mario Bros, Legend of Zelda, Mega Man, and Metroid were such formative games in my youth.  And they were hard.  Really hard.  There was a time when when actually beating a game seemed almost impossible.  And you had to do it on your own.  Sure there were the occasional Nintendo Power magazines you could grab for walk-throughs and tips but those were few and far between.  Early gamers were on their own, relying on nothing but their prowess and skill and problem solving skills to get the job done.  I have a friend who can finish Contra in under twenty minutes, and for you younger people that doesn’t seem impressive.  To me, I am in awe and this person is some sort of gaming god the likes of which there are few of today.  My very own mother and father, who were huge fans of the original Legend of Zelda game actually stayed up into the wee hours of morning one night just so they could fully map out the last dungeon level on a yellow piece of legal pad paper.  They were hard core.
In recent years, with the introduction and growth of the internet it has become much easier to look up something when you get stuck in a game.  There are countless tips and tricks all at a gamer’s fingertips just one click away.  And now of course there are videos to help you out when you’re really stuck.  There are also videos of all the cut scenes in games gone by that we used to have to play the entire game to see.  There is something kind of cheapening about this in my opinion.  Not because I’m adamant about actually playing to experience all the content, but because it just seemed more special and just for you if you got it in game.  Take for example the cut scene in Final Fantasy VII where Sephiroth kills Aeris (14 year old spoiler alert!).  That was a moment that profoundly impacted the player.  It was a personal experience. That shit is on Youtube now.
I can think of one example of a game where I sound like an old woman yelling at her grand kids about “no shoes” and “uphill both ways” and “only had meat on Tuesdays.”  When I first started playing World of Warcraft five or six years ago, it was incredibly challenging.  Quest logs would give you a general idea of where you needed to go and what you needed to kill but you had to wander around pretty aimlessly searching for your objective.  Nowadays there are quest markers on a colorful map that tell you exactly where you need to be, exactly what you need to kill, etc.  Buying a mount used to be only available after level 40 and your horse and riding training cost about 200 gold.  Do you know how hard it was to get 200 gold back then?  Now it’s roughly 9 silver and available at level 20.  Kids today have it so easy. 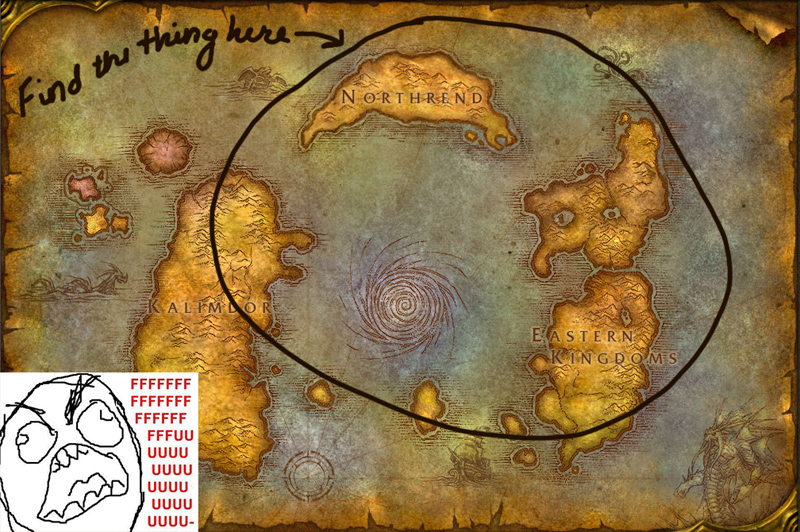 Are games becoming easier? Is there a pressure on game companies to “dumb down” their products for the players of today?  I don’t know the answer to that.  I do know that my attention span now would make it difficult to play through any of the games of yesteryear with any sense of real satisfaction.  So what does this mean for games, and are any changes that are being made simply a response to youth or a response to the globally changing attention spans of gamers everywhere?  I can’t say with certainty that gaming is becoming easier and less challenging.  I can’t even say that would be a bad thing.  What I do know is that these old school gamers, those that pioneered the way and defeated truly unbeatable games in the past deserve respect.  Much of their gaming experience probably paved the way for the ease with which we can all play them now.