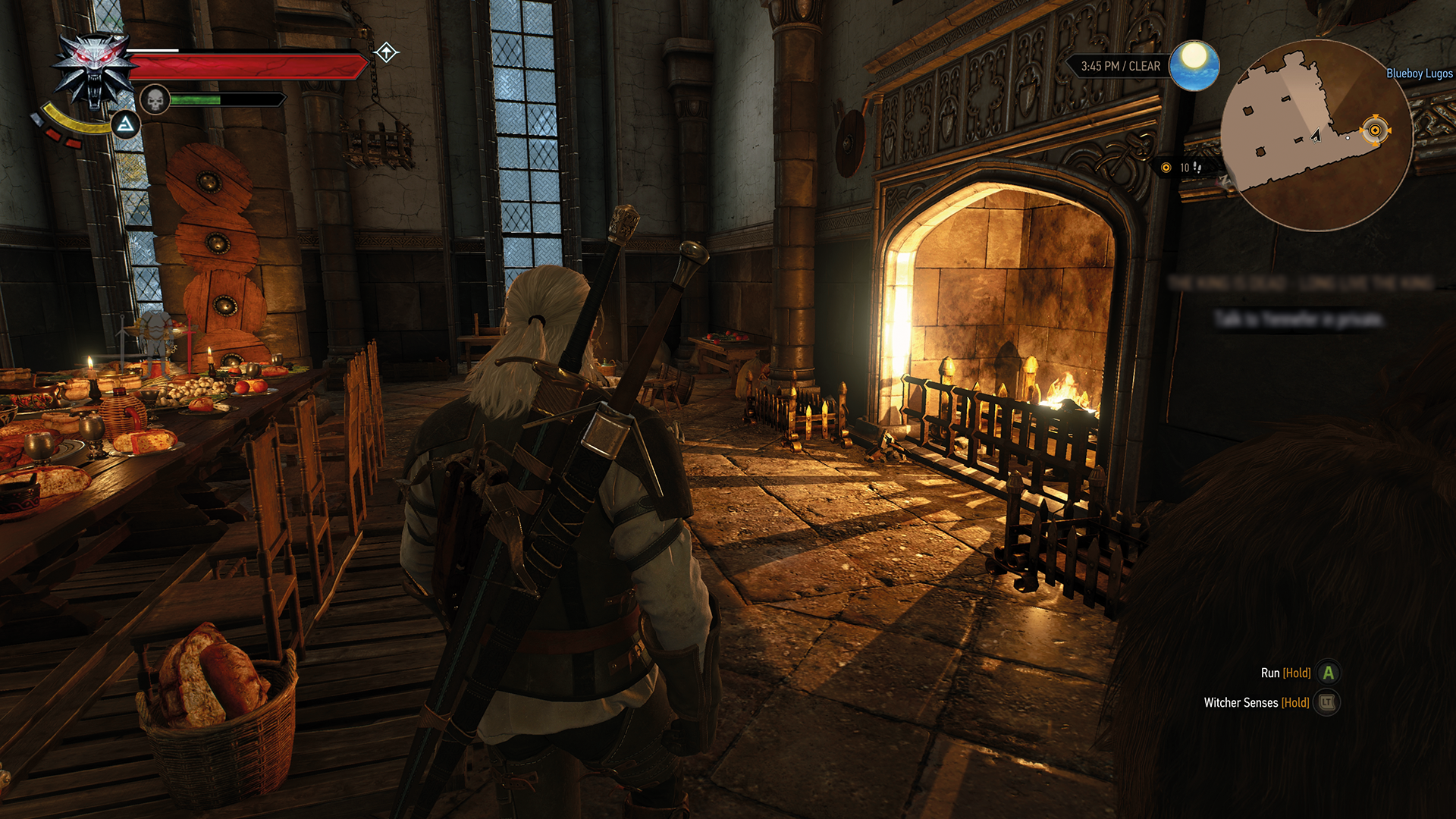 A thread runs through open worlds, holding together the collective sequences and explorable regions, existing across many games. We can venture into them with clear intent, or for the sake of finding something new. Recent trysts into digital landscapes have evolved past once pristine wonderlands, embracing entropy as something that must exist within their lands to feel authentic. A barn cannot only be modelled and rendered before it’s put before the player, but must also be designed old; aged, weathered and used.

While this brings a level of authenticity to already wide worlds, some also bearing depth and height, the environments seem more like dioramas or sets, proverbial painted cardboard that serve only as a backdrop. What’s apparent from the earliest moments of The Witcher 3: Wild Hunt, is that it brings a new measure. Weight.

There’s a heaviness apparent in the way in which you interact with the world, yet it doesn’t slow you down. Everything moves as though it’s made up of meat slabs, there’s weight there in the controls, but it’s in combat where this feeling is especially visceral. Instead of taking potshots at beasts or wrangling with QTEs, it feels more like you’re actually taking one down. A Griffin is the first major mythical you’ll hunt down and it’s much more within your grasp than say, Flotsam’s Kayran (I’m sorry, don’t hate me). You can be as cautious as you want to, throwing in a big whack and backing way back, instead of guns blazing.

The guns being Geralt’s. Dem arms.

Part of that comes from how we’re introduced to the staples of Witcher life – our immediate tutorial is played as a training exercise for one of the other characters, where the presumption is Geralt of Rivia knows his way around both of his swords. A sprint for an arbitrary finish line shows us how to navigate with grace, or has us run off the ledge and take first place through sheer brutishness. We learn the basics of combat, both in how to control Geralt, but also a quick introduction to the spells and equipment. Further (though still early) into the game, it focuses on lore. Witcher sight is introduced as a means to track, and the main questline has a chain of quests that guide us through the preparation rituals that make it possible to take on such troublesome foes. 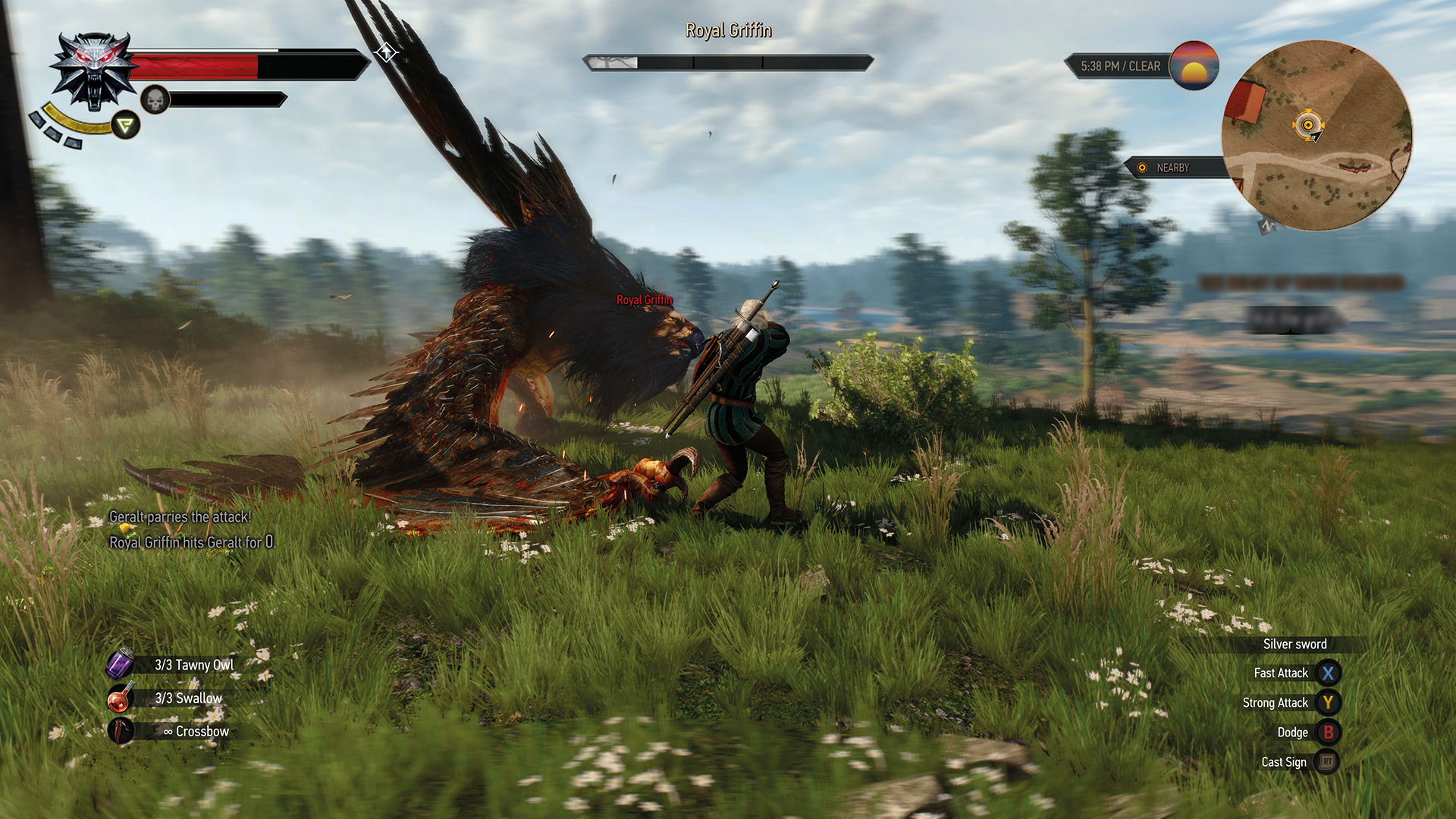 A lack of preparation can make even the plainer foes a force of reckoning, but retreat will let you keep the proverbial scars (along with the ones Geralt already has).

Without even treading over spoilery grounds, everything from the initial campsite up until our dear Geralt shaves could be seen as an extended tutorial and The Witcher 3 does a better job than its predecessors of explaining these concepts to the player, ingraining the importance of doing them. The series has never been so, but this isn’t a game where you rock up to a Big Bad and start wailing on it with little more than your finger’s crossed: you have to plan. It also introduces the characters here, laying out the politics and history of the region and filling in the gaps between the previous game (plus what’s a witcher, where a witcher fits into all this, and which witcher is which-er).

Adding to the weight of the world is the character design – we’ve seen broken before, but much of the character ensemble is deliciously ugly, and not merely because potatoes featured heavily in their family tree. The faces look as lived in as their stained, torn clothing, though there’s also an expected level of gorgeousness once you come to the major cast. There are little strokes that elevate the visuals, rain dripping along wood, and skin that’s blemished, stubbled or just plain old.

Lighting plays a major role in bringing the visuals home, but it’s in the outdoor areas that you might be especially taken. It’s difficult not to stop and watch the crimson skies melt into amber as the sun sinks into the oncoming night, and let the gold light Geralt in a rare moment of peace. You want to let it spill euphoria out of the screen, and pour it into your soul. Alright, maybe that’s a bit much. It’s not that it encroaches on lifelike, though definitely life-inspired, with solid aerial perspective feathering the landscape more deftly than a forced fog.

The music is distinct, but as the best music does, in the right moment it disappears. It never leaves, but neither does it announce itself in the way the wrong music would. It evaporates into scenes, becoming a seamless addition to the atmosphere. 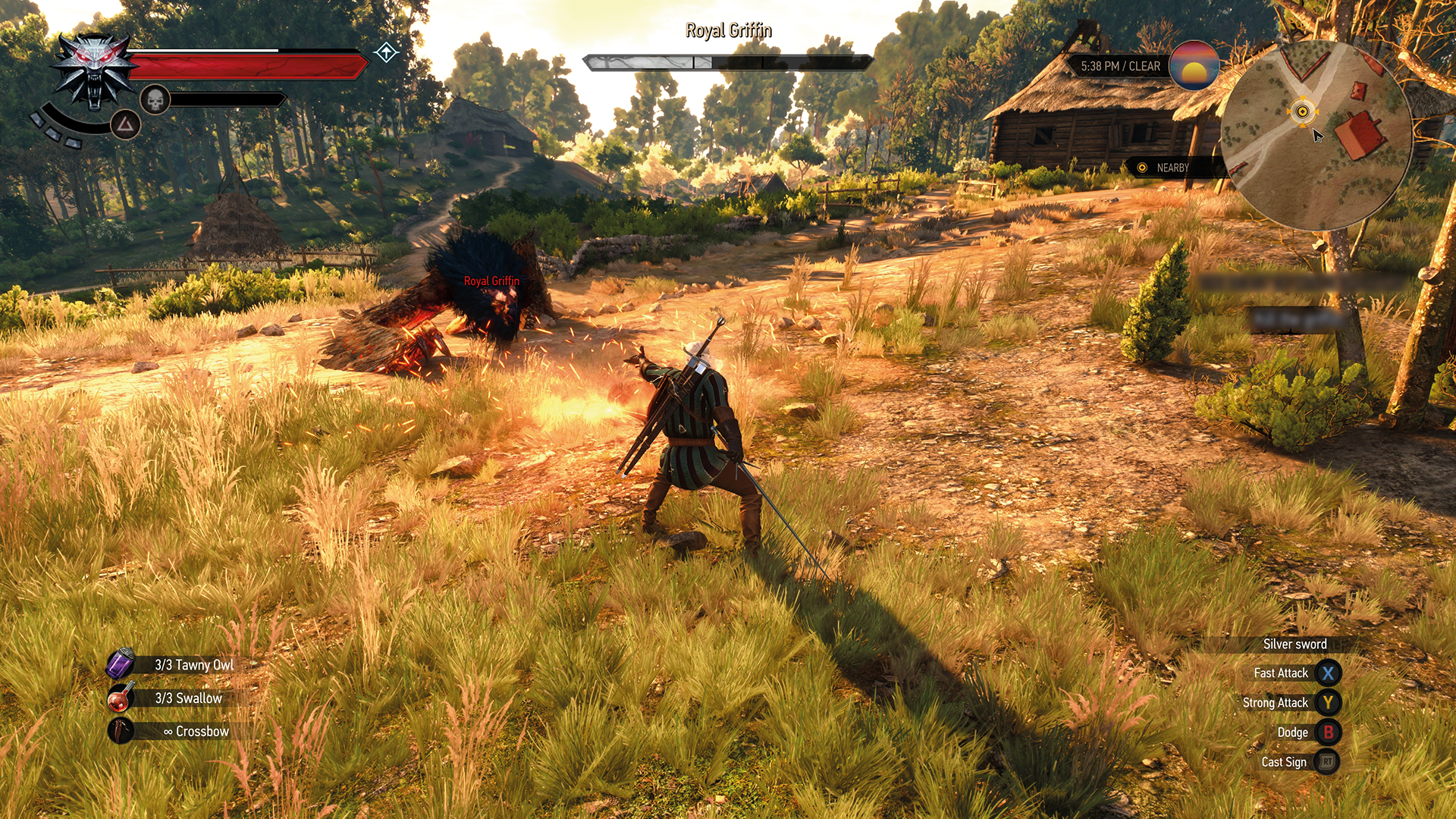 One of the touches by CD PROJEKT RED I especially liked was the narration which frames the opener and provides a further context for what’s taken place for those that perhaps haven’t played the previous games, or read the books, or watched the TV series or seen the movie or- okay, I’ll stop.

It wasn’t all smooth sailing. In my session I did die once – to a pack of dogs. The version I played was also the gold, not-yet-patched version (Day One, y’all) so had an occurrence where my horse was amazing, flying well above the trees with Geralt on it. It’s hard to be too critical over that when game horses get treated like an M35 Mako, but other than that and a little pop (PS4), no major issues.

It’s not possible to do a far-reaching review of the game with only a few hours at it, the time I played was a positive experience, and I’m personally looking forward to doing it again.

Thanks to Bandai Namco Entertainment for giving us some hands-on time with The Witcher 3: Wild Hunt ahead of next week’s release. I’m not going out on a limb here to say you’ll want to get this game into your hands, and we’ll have more coverage of the game as we do the same.