The Evil Within – A Return to True Survival Horror

A behind closed doors demo of Bethesda’s The Evil Within. Step into the shoes of detective Sebastian Castellanos as he bears witness to the terrifying resurrection of original Survival Horror.

If you are “iffy” about the direction Survival Horror games have taken in the past few years, “if” no more. Bethesda’s The Evil Within is bringing Survival Horror back to its roots by the mastermind of Resident Evil himself, Shinji Mikami.

“This is my first return to survival horror,” Mikami said, smiling like a child on Christmas morning as we took our seats in a dim lit room for our behind closed doors preview. The massive grin on his face displayed his enthusiasm in showing us his creation—clearly he is a man who holds a true passion for what he does.

“With The Evil Within we are making a very terrifying game. We are taking Survival Horror back to its original state.” he continued. At this statement, I shuddered. My version of what I considered to be original Survival Horror games took me back to the horrors of titles like the original Resident Evil and Silent Hill. As much as I love those games, I am not afraid to admit that beating them was a struggle – more often than not I could not face my fear unless I had friends over and all of the lights on.

With slight discomfort, I glanced over to Mikami, realising the world he was about to bring us into. Noticing his smile, I then understood that this sense of distress is exactly what he wants us all to feel – scared to the point that the only relief was found pressing onward and hoping.

“The Evil Within is pure survival horror. We want you to experience unimaginable fear, but also feel the triumph of overcoming it.” said Mikami. And with that we were off into the shoes of detective Sebastian Castellanos. 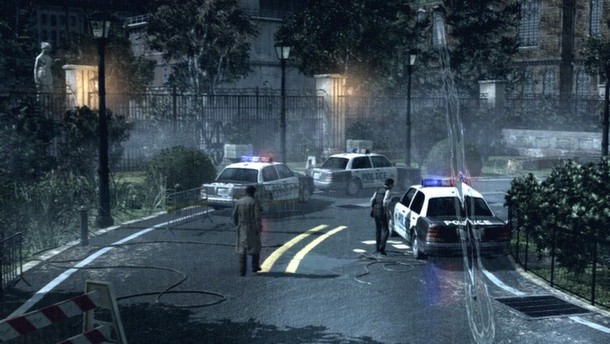 The world in which Sebastian inhabits is ominous; the stunning graphics display a rainy and dim atmosphere that erases the lines between cut scene and game play. Water droplets hit the screen as Sebastian and the accompanying police force approach Beacon Mental Hospital. We can hear panicked voices on the radio—unsurprisingly, something is amiss. Sebastian enters the asylum only to witness a gruesome scene; dead bodies line the hall, blood is splattered along the walls and halls, and there is nothing to hear but a bone chilling, echoing silence. He notes the horrid smell as we wander the dimly lit halls in search of survivors in the massive atrium; eventually we come across one, but his response to Sebastian’s questions are mumbled and incoherent. Eventually our protagonist stumbles upon the video surveillance room. In revulsion, he watches the screen in which three policemen helplessly shoot a ghostly figure that within seconds appears on top of them and violently cuts their throats. Sebastian backs away. Suddenly, the man who initially appears to be the quintessential stoic hero displays one of the strongest human emotions—fear.

Sebastian swiftly turns to warn his colleagues, only to see the same ghastly apparition at his side. The screen is then filled with gruesome scenes of blood and gore chillingly accompanied by Bach’s classical masterpiece “Air on a G String,” a juxtaposition that drives me to grip the edge of my seat in discomfort. From that point on, I knew the game would hold true to Mikami’s statement.

Sebastian awakens to find himself hanging upside-down in what appears to be a meat locker. Of course, in this context, the meat only pertains to human flesh. He opens his eyes to see blood dripping down his arm, and as we gain control and begin to look around the room we see other bodies swaying lifelessly back and forth… then a hulking figure captures our gaze. He his massive and gruesome, covered in blood—and yet there is something horrifically relaxing in his disposition as he chops up the human remains on his table. With booming footsteps he walks slowly over to where Sebastian hangs, grabs another body, and returns to his rhythmic chopping. As soon as the opportunity arises, the player swings Sebastian just enough to reach a knife protruding out of a nearby corpse. After cutting himself down, Sebastian drops to the ground with a loud thud—tensions in the room rise profusely as we are then forced to sneak past the jailer to get the key. Once it is retrieved and we make our away out, I let my guard down just in time to hear an alarm go off… and a chainsaw rev in the background.

We narrowly escape our pursuer, who, compared to his eerily calming demeanor, is now ragingly upset and driving his chainsaw into anything that moves. During our escape, Sebastian’s leg gets injured—an event that merited me to cuss out loud in the presence of a legendary game designer—and we are painstakingly forced limp to safety. Slowly.

We take shelter in a nearby locker and watch through the cracks as the jailer, whose erratic movements make him appear to be in physical pain, searches the area and then clumsily stumbles into the next room (Silent Hill 2, anyone?). In this part of the game, we are playing a terrifying match of hide-n-seek. After observing the path of the jailer we cautiously make our way to an elevator.

The next part of the game, reminiscent of the old GameCube title Eternal Darkness, brings us into a small hallway. All seems as we make our way towards the end—until blood fills the halls and splatters everywhere, only to disappear seconds later. It becomes obvious (and understandable) that Sebastian is beginning to suffer from some extreme mental breakdowns, breakdowns that we unfortunately have to play through. Making our way through a door at the end of the hall, we find Sebastian in a small room with a pool of blood at the end. As soon as we are given time to feel some semblance of safety, a woman-like figure crawls out from the blood, moving her multiple limbs in abrupt thrashes similar to that of Scarlet, one of the bosses from the Silent Hill series. 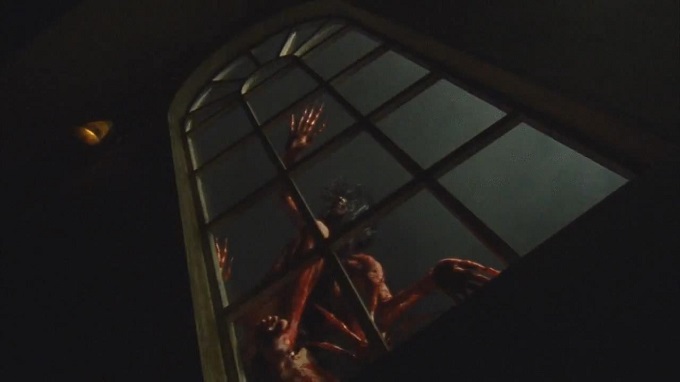 The screen goes black and we are again taken to a different part of the game. Sebastian is running down a path and takes shelter from unknown assailants. Looking outside of the windows we can see a small horde of zombie-like creatures running towards us. We run around the house, planting proximity mines and preparing for the attack. From this scene we can see that the key to taking out enemies is not direct contact, but by covertness, traps, or straight-up avoidance. Resources are absurdly scarce in this game, and there is no Ellie or Elizabeth to throw coins or ammo at Sebastian when they are needed. At one point Sebastian actually shoots a zombie in the leg and uses a lighter to finish it off, showing that resources can be tactically spared.

Once the demo was done I loosened my death grip on the seat, my heart still pounding. This game is not a jump-scare survival horror game based solely on shock factor. It is not an action game. It is a meticulously designed experience that has a method to its madness—to scare in every possible way using a mixture of psychological terror and general discomfort.

There are no quick time events or massive stores of ammunition. There is simply you, a disturbing environment, an enigmatic story, and a bunch of twisted horrifying creatures; the way survival horror started.

Bethesda The Evil Within