EB Games Expo 2014. Lots of lines, lots of merch and lots of games. Here’s our thoughts on 6 impressive titles on display at EB Games’s most recent Expo.

To say that this latest shooter from Insomniac Games is a bit different is an understatement. ‘Bat-shit Crazy’ as described by Creative Director Marcus Smith is more on the button. Playing the online co-op mode Chaos Squad was hectic and fun, with the bright colours and neon lights giving the area a great look without distracting too much from the games action. The action itself was intense, with the Night Defence section I played through all about defending two vats of Overcharge Delirium XT from consecutive waves of the OD’d. The weapons were completely over the top, with my personal favourite being the One Handed Dragon, which shoots fireworks at the enemy, resulting in a bright and colourful explosion of fireworks and OD’d body parts. Honourable mentions also go the the TNTeddy, which shoots out teddy bears stuffed with (you guessed it) TNT, and the Captain Ahab, which is used to freeze enemies into blocks of ice.

With its hectic and highly unorthodox movement controls you traverse the environment through a combination of rail grinding, wall running and bouncing off objects. Staying grounded is tantamount to a death sentence as you cannot even run, therefore finding the right lines to keep yourself not only continuously moving but where you can fight enemies is vital. The transitions are made a bit easier through the inclusion of a snap-to feature, making it easier to land on the rail you are aiming for while in the midst of battle. However as the action heated up, I did find it difficult to concentrate on rapid movements around the map, trying to find a line to keep a continuous movement whilst also keeping track of where your enemies are and what you are shooting at. Perhaps this is a case of practice makes perfect. We’ll know come October 30, when the game launches.

Developed by 2K Australia instead of series creator Gearbox, the next entry in the loot driven FPS/RPG hybrid takes place on Pandora’s moon, with four playable characters sourced from NPC’s in the previous two games. One of the most important things I noticed when I started my playthrough was that it not only looks like a Borderlands game, but it also feels like one, an important feature in a game that is made by a different studio to the originals.

Being on the moon there are of course new game elements that come into play for our Vault Hunters. Not only will they be negotiating interior sections of the moon base but exploring outside it as well, resulting in the need to pick up oxygen cannisters as well as learning how to deal with longer jumps as a result of the reduced gravity. During my playthrough, I chose to play as Claptrap and discovered that Claptrap’s special ability does not do any one thing, but randomises from a couple of choices, such as magic bullets that speed up the rate of fire or a mode in which you start to dual wield and cannot stop firing. Activating Claptrap’s ability is a lucky dip that can both help and add extra challenge to add a little bit more spice to the game.

On top of the traditional weapons found in the previous two games, new inclusions of weapons that freeze enemies and lasers bring a new vitality to the series. The game launches October 16 for PC, PS3 and Xbox 360. 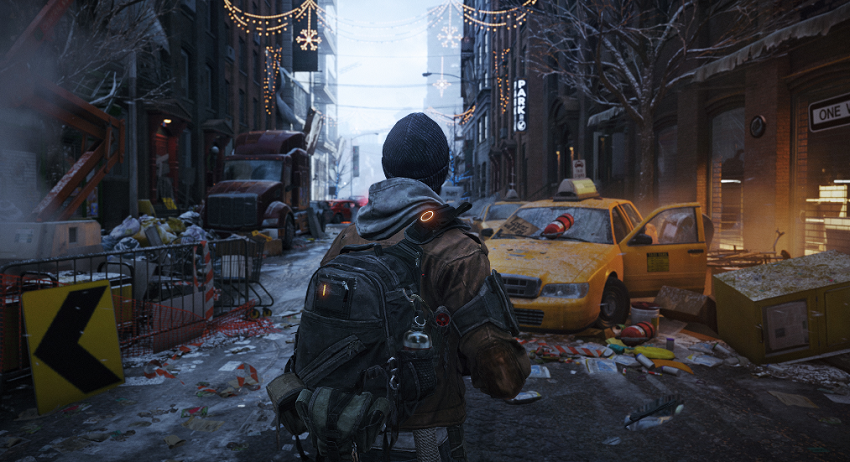 The Division, an MMO experience in development by Ubisoft, hasn’t revealed too much of its story, but what we do know is that there has been an outbreak of a disease in New York and you play a member of a cell of secret government operatives known as The Division, who are activated in order to help bring New York under control and save as many of those still alive as possible.

The demo Ubisoft showed took us through a mission in which the three Division members made their way through the subway and up to the streets of New York before liberating an area to use as their base. The gun-play is reminiscent of the Ghost Recon series, an old favourite of mine, with an over the shoulder third person perspective, and when the bullets start flying you can see the destruction occurring in real time – bullets creating individual holes in glass until it loses its integrity and shatters into tiny pieces. The Division operatives also have access to a number of nifty little gadgets to help neutralise the enemy, such as the gun turret or a mine that seeks out your enemies to blow up right next to them. The gadgets can also be changed on the fly, allowing you to customise your equipment for whatever situation you encounter.

The game world is dense and cluttered with debris and abandoned cars littering the streets. The mass of body bags you come across in your travels is a stark contrast to the emptiness of the streets in a city as large as New York. While the people running the demo mentioned that the game would allow you to go to the rooftops of buildings, we were only shown the street level and a subway station.

One of the key aspects of the game comes in the form of the time and day and weather conditions. The game cycles through day and night in real time and this, along with the weather, will affect how other NPC’s of the world interact with you and your squad. You will also see the real time effects of your actions as you progress through New York. As an example, when undertaking a side mission to restore power to a a sector, you will see the the area light up once you power up the generator and as a further result of your actions the area becomes more secure, making it easier for your team to move around.

Going hands on with MKX was brutal and I mean that in the best possible way. The punches and kicks have the feeling of real impact behind them, shooting out spurts of blood so often that by the end of the my first round taking on Scorpion as Raiden, both fighters were covered in their own and each other’s blood. Making a return after their introduction in the 2011 reboot, the x-ray specials are just as harsh and as satisfying to land as last time. Added to MKX this time around is interactive backgrounds, where you can use things like overhanging vines and tree branches to launch yourself at, or over, your opponent, or pick up barrels to launch as well. Playing on the Outworld Market stage I noticed a giant cat-beast just chilling and having a nap directly behind the combat area. As I noticed the glimmer of the R1 prompt under my life bar I hit the button and assumed the cat-beast would savagely rip into my opponent. That didn’t happen – the big creature just sat there while Raiden grabbed hold of an old lady standing next to the beast and proceeded to launch her into Scorpion, whereby she crumpled to the ground and lay there in a heap for the rest of the fight. Is it wrong that I thought that was awesome? Probably.

Character wise there were no new fighters on display but I did sample the four new fighters already revealed, each with their own pros and cons. Every fighter has a ‘perk’ that is chosen prior to the beginning of the fight which boosts certain abilities and attributes. Using the bigger characters of Kerr Torr and Kotal Kahn you have a harder time hitting your more nimble opponents but this is counteracted by the satisfaction of connecting with their powerful attacks.

MKX looks to live up to the high bar set by MK9 and is currently before the Australian Classification Board for rating. All things going well, you too can feel like a brutal bad-ass come April 14 2015.

The first thing that struck me about The Order is it is graphically very impressive and easily one of the best I have seen so far on the PS4 system. The visuals were extremely detailed and there was no change between the cut-scenes and in-game action. The mist in the air that was showcased in the demo gave the area extra atmosphere without overdoing it and making it too overwhelmingly dark and gloomy. The frame-rate was smooth through the entire demo, even with the explosion-intensive animations of the Thermite gun.

There were only two weapons available in the demo: your typical pistol and the Thermite gun. The Thermite gun has two phases to firing: the first phase consists of firing Thermite bullets (which are bullets that expend a gas like substance) and the second consists of shooting a flare into the expanding Thermite cloud to ignite it, sending a wave of fire wherever the Thermite has a continuous spread. If you spray more Thermite near an existing fireball it too will catch on fire, however the effect doesn’t last for too long as the Thermite will dispense quickly. 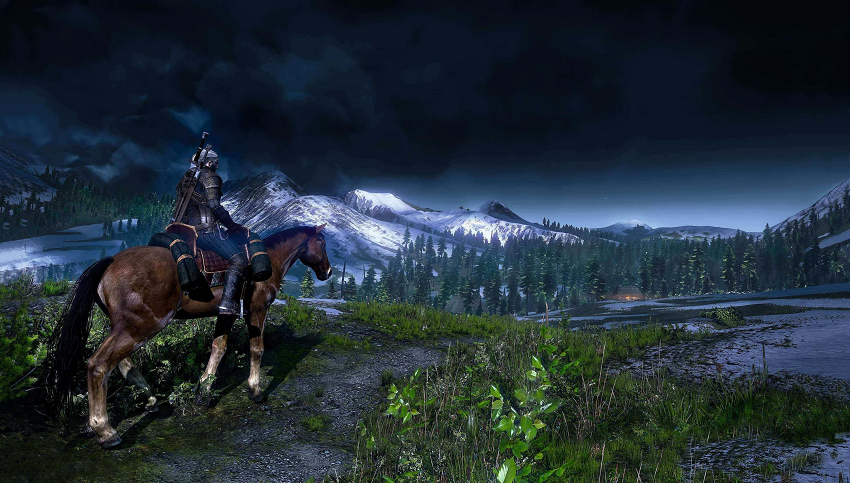 Whilst I have not played the previous Witcher games, Tash recommended I take a look at the RPG from CD Projeckt Red. For those like me who did not know of the series, you take on the role of Geralt, one of a dying caste of monster hunters who are imbued with superhuman abilities and magic so that they can take on the big bad creatures of the world.

In the hands-off demo we followed Geralt as he used his heightened senses to track down a Griffin, following the trail until he was close enough to tag it with a special arrow that would leave a trail that was easier to follow. As Geralt tracked his prey, the game showed off its impressive draw distances as we could see the forest leading off well into the distance. As Geralt pproached a marsh type area, the vibrant greenery gave way to darker mud and dead trees.

After coming upon some bandits attacking a home, Geralt sprung into action, showcasing the game’s combat system. Players can use a combination of magic and swordplay to quickly make short work of enemies, and well-timed attacks will reward the player with devastatingly brutal kill moves. As I watched, Geralt finished off the final attacker with a crushing blow that sliced his opponent in half. After the fight, Geralt took some time to prepare for his challenging battle with the Griffin. Utilising the meditation menu, the player is able to customise Geralt with the tools best suited for taking out the Griffin and also pass time between the day and night cycle.

The demo climaxed with the confrontation with the Griffin and by the looks of it this action RPG, it will be spending quite a bit of time in my console come February 24 2015.