Every kid has used their imagination to play cops and robbers at one point in time. The guys over at Visceral Studios must have loved it because they have taken the core concepts that defined the Battlefield franchise, and given it the cops and robbers feel. They’ve removed the jets, attack helicopters and weapons of destruction for a closer, faster and more intense form of combat, while still feeling how you would expect a Battlefield title to feel. Battlefield Hardline is an entry that reinvigorates the franchise, restoring faith to the gamers who felt slighted at the launch of Battlefield 4 with a game that is fun to play, and works as it should straight out of the gate.

The biggest change in the game, apart from the departure from the setting, is that the single player campaign is actually really good this time. You take on the role of Nick Mendoza, an officer in the Miami Police Department who gets caught up in the corruption of his partner, setting off a journey to take revenge and bring to justice the corrupt cops who sent you to prison. Visceral Games, who are renowned for the quality of the Dead Space series (of which you can read the review Tash wrote for the third installment here), and they bring an atmosphere to Hardline that does not exist in conventional shooters. For example, the game levels are ‘episodes’, with a recap of what happened in the last when you return to the game. It is a nifty way to present the levels, and also a strong way to ensure players can remember the story so far. Such is the quality of the game and its writing that even now, long after I have played through the campaign, I can still recall the characters and the parts they played. The characters are used to help with the development of both Nick and the story, not just as fodder to be taken down. Adding to the story is the ability to gather evidence towards different crimes that are related to the plot. Scattered throughout each episode, finding all the pieces of the evidence of a case will provide you with weapon unlocks and a nifty little cut-scene that puts it all together, and sheds a bit more light on the overall story. 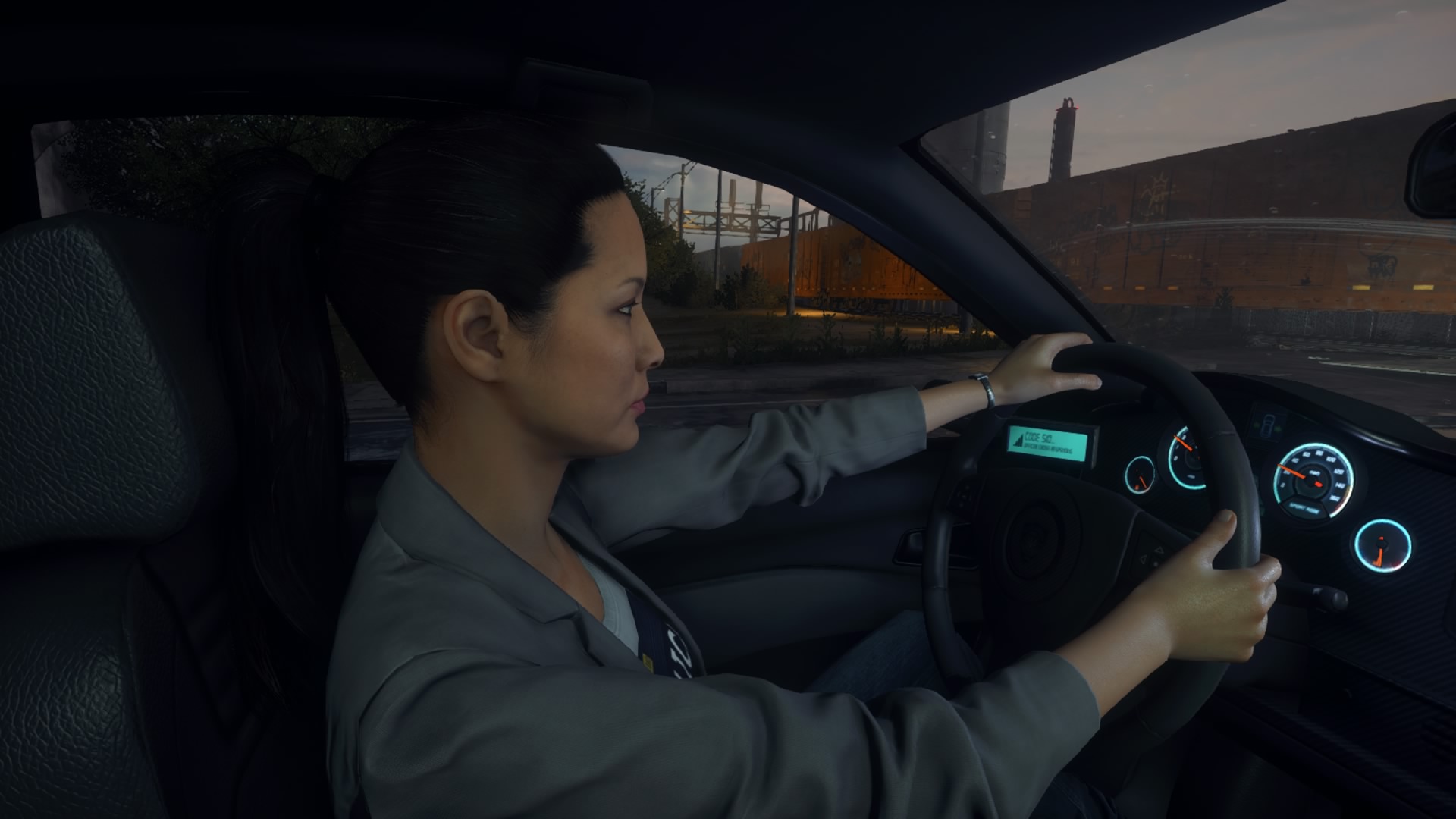 Hardline also gives you a choice that no other shooter does. You can complete whole levels without firing a single shot. Hitting L1 as you sneak up on an enemy will flash your badge, allowing you to arrest them. This takes them out of the fight, and provides you more points and unlocks than if you went in and shot the hell out of everyone and everything. You can also be a silent assassin, or your own version of Rambo, laying waste to everything in your path. It is definitely something you don’t see in a regular shooter, and it’s refreshing to be able to play how I want to play. There are areas where you do have to shoot your way out, but these areas always make sense within the story, and never feel forced. However, I do take issue with the [SPOILER] tank-to-tank battle towards the end of the game. Yes, it was cool to be in a tank, blowing stuff. But it felt as though it was put in just for a bit of yahoo factor. I mean… anyone can jump in and know how to drive a tank while loading and firing the cannon, right? Right. For a campaign which had been, up until that point, more or less grounded and believable, it was a moment that just wrenched me out of the immersion of the story.

Visceral has done a great job with the multiplayer, retaining the feel of a Battlefield title, while introducing a bunch of new modes for players to tackle. Apart from the returning Conquest and TDM modes, Hardline introduces us to five brand new game modes. Hotwire involves capturing objective cars and driving them around as fast as you can while your opponents try their best to kill you. Think of it as a version of Conquest where the objectives are constantly on the move.  Heist mode tasks the players as either criminals trying to steal two packages and get them to a drop point, or as the police who are trying to prevent this through the judicious use of lethal force. Blood money places a big pile of cash smack bang in the middle of the map for both teams to fight over while attempting to get it back to your vault, all the while defending your vault from the other team’s raids. All of these modes are big battles with lots going on, but if you want something that’s a bit smaller and more intimate, then Visceral has you covered with Rescue and Crosshair; two five-on-five game modes that have been designed with the e-sports scene in mind. Rescue has the cops trying to extract two hostages without all of them being killed by the criminals, while Crosshair has five criminals trying to take out a VIP who is being escorted by the police. Both modes don’t allow any respawns, leading to some very tense and cautious play. Communication is a must between players, as otherwise you will quickly find yourself full of bullets and stuck watching what your teammates are doing. 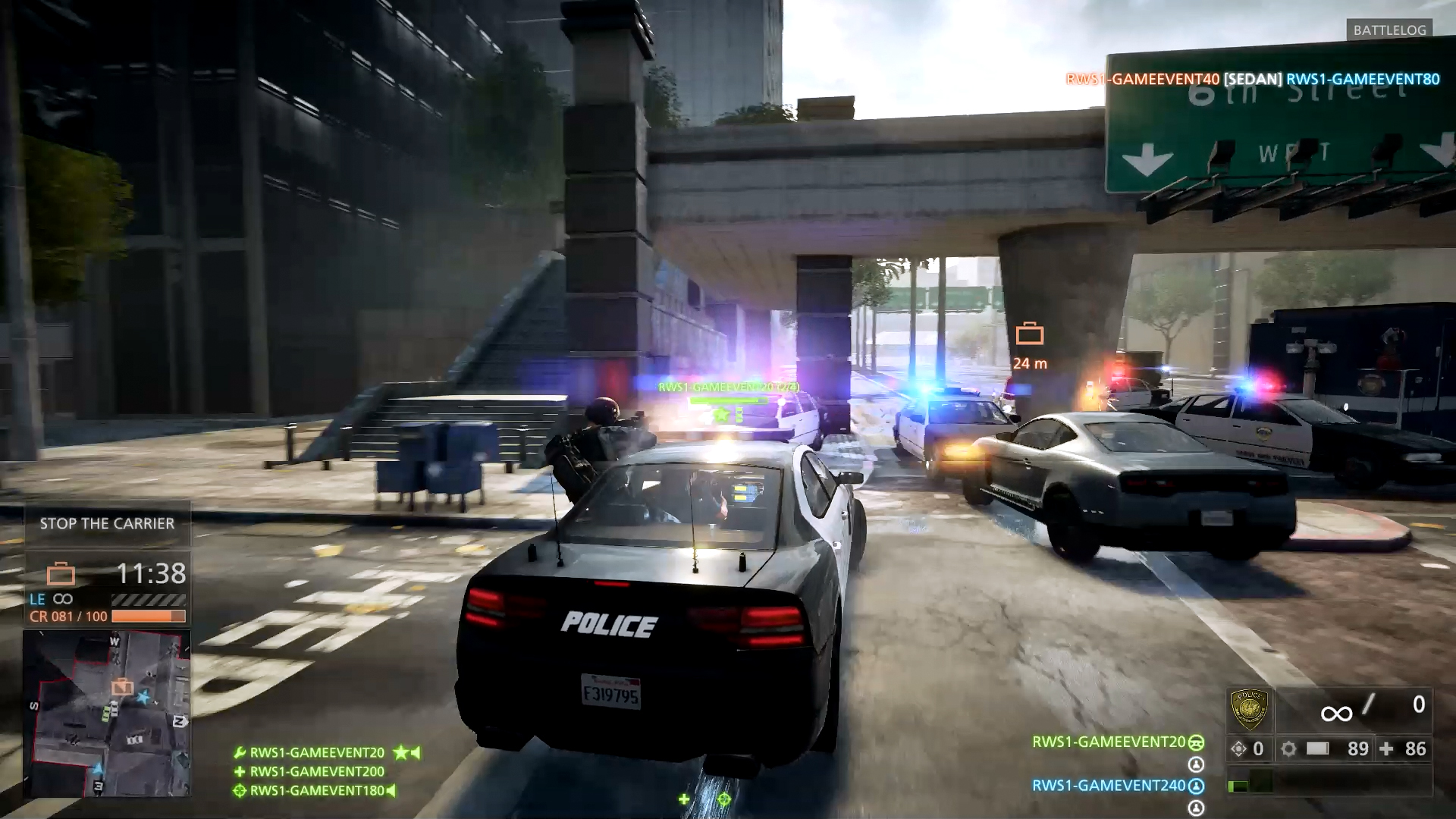 The weapons on offer are limited when you compare them to previous Battlefield games, but all four of the classes have access to two styles of weapons, with multiple versions of those weapon types available for purchase. For those who read my impressions from the beta prior to launch, you may be interested to know that the Battle Rifle is much the same, with a hideous amount of recoil for the limited clip size. However, when you stick it on single fire, it is a lot more manageable, and can be good to use if you have the patience to master it. The DMR weapons can be annoying, especially when you get a bunch of them pinging around you as you try and take an objective. But it is very satisfying when you get in close and take your revenge. Once again, the heavy weapon pickups are back on the maps, allowing you to find that little something to help you take down a speeding car or annoying chopper, sometimes changing the flow of battle in an instant.

Overall Visceral Games have taken a well established franchise, and taken it from the same old same old warfare tropes, and breathed a new life into not only the campaign, but the multiplayer as well. The new game modes are a blast to play, and I can see myself spending a lot of time on Heist, as well as the five-on-five modes. I have it on good authority that Rescue with tasers and golf clubs is a blast, but I need to find five opponents I can trust not to pull out a gun and just shoot me first. It is a well crafted game that, while not setting any new standards in the world of shooters, still provides an enjoyable time. Perhaps most importantly, the game has worked well on launch day, and every day since, which is not something every game that has been released lately can say.