October 5th-7th – EB Games Expo – three days in the calendar year that formed what was without a doubt the biggest event in the Australian gaming industry for 2012. They may have only constituted less than 72 hours, but what an amazing 72 hours they were. From the games on show to the special presentation at EB Live and the Community Hub to the exclusive screenings in the Madman Theatre – there was a mind-boggling amount of video game related content for all ages and gamers. And I was there for it all.

The games were clearly the main feature of the Expo, but rather than discuss them all here, I’ve decided to focus on the Expo itself. The games, and the developers and publishers who were represented at the Expo will each receive their own in-depth feature complete with hands-on thoughts and developer interviews where available. For now, the Expo itself is the focus. And what a spectacular expo it was.

It sounds cliche, but the atmosphere throughout all the venues was electric. When thousands of people passionate about the same thing converge on the same area, the air literally buzzes with excited appreciation for shared interests. Thousands of people were talking games, lining up to play games, watching others playing games while they waited, and grabbing all the free posters they could get their hands on. It was a delight to see so many people enjoying themselves, with minimal to no complaining from people waiting up to two hours for hands-on time with the likes of Call of Duty Black Ops II, Halo 4, Assassin’s Creed III, Injustice and Zombie U.

The Exhibition area, which featured the booths of all those showcasing their games and products was significantly larger than last years expo, providing a definite advantage in terms of space and accessibility. Whilst some jostling and careful crowd manoeuvring occurred during the busier times of the expo, it never reached the frustrating levels of last year’s expo. Potentially linked to the larger exhibition area, ventilation within each of the venues was also an improvement on last year. And whilst some may ask why ventilation would even garner a mention in this report – those of you who have been to any sort of gaming/pop culture/geeky/ anime con will know how important good ventilation is. As much as it is a stereotype – it’s a stereotype with merit as many of the attendees of these sorts of expo’s….struggle with the concept of personal hygiene. Thankfully, the ventilation and air conditioning at this year’s expo was easily up to the task of keeping any personal hygiene issues at bay, and I am incredibly thankful for that.

The inclusion of an outside area to the 2012 EB Games Expo was both a stroke of genius on behalf of event organisers and well-received by event attendees. As exciting as the main exhibition, arena and show floors were, sometimes you need a space where you can sit and re-charge. The outside areas provided one such recharge area, and the combination of the varied food stalls outside meant attendees were never starved for choice. Prices of meals and drinks were relatively expensive, but this is sadly to be expected for this sort of event. Better to pack your own food if you can.

One of the standout new inclusions to the event was the Community Hub, where attendees could go to participate in Q and A sessions with developers, have items signed by well-known industry representatives and listen to panels from leading professions in the industry. In addition to these events, there were retro arcade machines to play, air hockey tables, handlehld gaming zones and a chillout area filled with the most comfortable not-beanbags by Lovesac I have ever had the pleasure of relaxing on. The inclusion of all these things created a relaxed, chilled vibe that provided the perfect retreat from the intensity and bustle of the main exhibition floor. The Q and A sessions and the panels were well worth taking time away from the busy exhibition floor to listen to and I can honestly say the Ladies in Gaming panel organised by Geekbomb and EB Games Australia I was involved with was interesting, insightful and generated some very worthwhile discussion. But more on that in another article – for now, have a lovely picture of the panel. 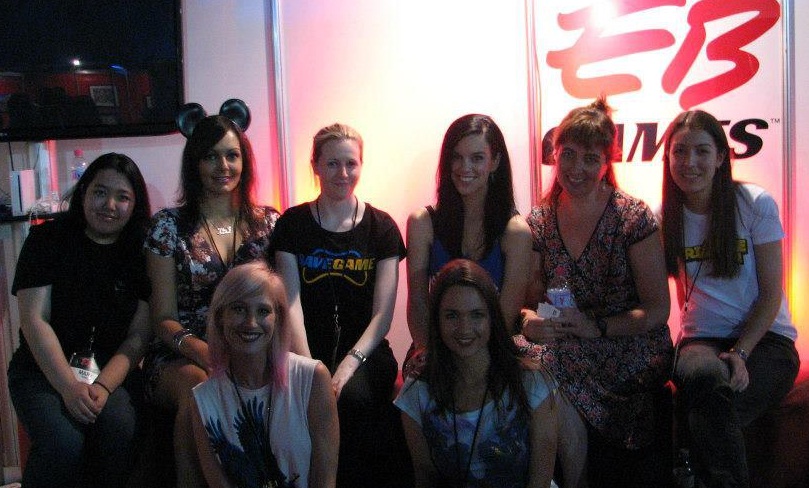 Also making its debut in this years EB Games Expo was the Home Grown Gaming area, where the best and brightest of Australia’s emerging devs were given their rightful and well-deserved time in the spotlight as part of the Home Grown Developers area. Showcasing their current projects, it was fantastic to see some of the upcoming titles and work from a variety of companies and individuals. Also included in this area, the Homegrown Tech Zone showcased the latest technology available to gamers. There was so much on display you could almost hear the wallets of gamers crying out and even though I know my bank balance will suffer, I hope this area is expanded next year. Both the Home Grown Developers area and the Home Grown Tech Zone were welcome additions to the Expo, and it was fantastic to see so much talent and innovation on display.

Not to be overlooked, the Home Grown Gaming area also featured the talents of Australia’s best e-sports players and the sheer skills on display were mind-blowing. As someone who gains as much enjoyment from watching others play games as I do playing them myself, this was both an enjoyable and eye-opening experience for me. The sense of community and good-natured competitive spirit were clear to see and even if you weren’t a huge e-sports fan before, this area of the expo was well worth a visit simply to appreciate the talented e-sports competitors Australia has.

Sideshow Alley completed the Home Grown Gaming area and if I mentioned that wallets were crying before – a visit here would have sent them into a full blown seizure. There was something for even the most discerning of collectors here and the animated feature screenings in the Madman Theatre coupled with the cosplay competition judging meant there was always a steady stream of people passing through this area. Those who took the time to check out this area were well rewarded – I was able to catch some of the screening of the Mass Effect anime feature – Paragon Lost – and what I saw was fantastic. Acting as a prequel to Mass Effect 3 and focusing on the early career of James Vega – one of the new squadmates introduced in Mass Effect 3 – the feature is a solid addition to the Mass Effect universe and would have made me a Vega fan had I not been one already. The Madman Theatre was an excellent addition to the EB Expo and one I hope makes a return appearance next year.

The final official element to this year’s expo was EB Live – which gave attendees the chance to watch live gameplay demonstations and hear about the upcoming blockbuster titles from those who’ve had a hand in making the games. Designers, Creative Directors and others within the industry took the time to speak directly to attendees and the live gameplay demonstrations were fun in their unpredictability. At the sessions I attended, the crowd really got involved in the presentations and this excitement made the sessions all the more enjoyable. Special mention must be made to whomever decided on showing #EBExpo hashtagged tweets on the big screen prior to each session – once people realised their tweets could be chosen to be featured on the big screen it sent attendees into a frenzy of #EBExpo hashtag tweetage to see who could successfully have their tweets posted. 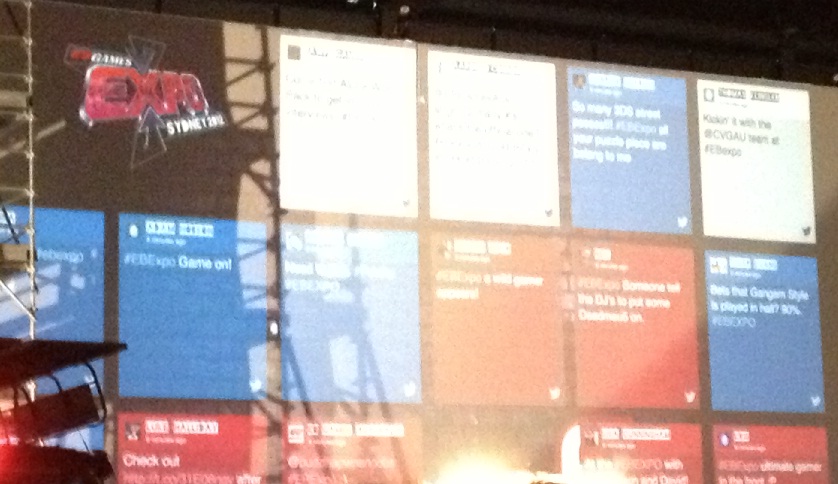 All in all, the EB Games Expo 2012 provided attendees with a varied plethora of things to play, see and experience, and it was an excellent showcase of everything the Australian gaming industry has to offer. The crowds were lively, the event was well-structured and well-organised and there was something to appeal to everyone. The fireworks at the Friday and Saturday twilight sessions were a nice way to bring the Expo to a close on those days, and the pairing of chillout zones with the more vibrant exhibition and arena floors provided a nice counterpoint.

I’d like to thank everyone involved in organising and planning the expo for this year, and I’d also like to thank everyone who said hello to me while I was busily racing about the expo. It was wonderful to meet all of you, and I hope to see many of you again next year. Save Game would be nothing without the support of our community, and I was incredibly humbled to see so many of you out in force at the expo. I can’t wait to cover the expo again next year, and I am excited to see how the expo grows!

I’ll have more coverage of the EB Games Expo over the coming days, including interviews with developers, hands on with upcoming titles and in-depth booth tours of developers and publishers represented at the Expo.